Winner take all... Even for churches 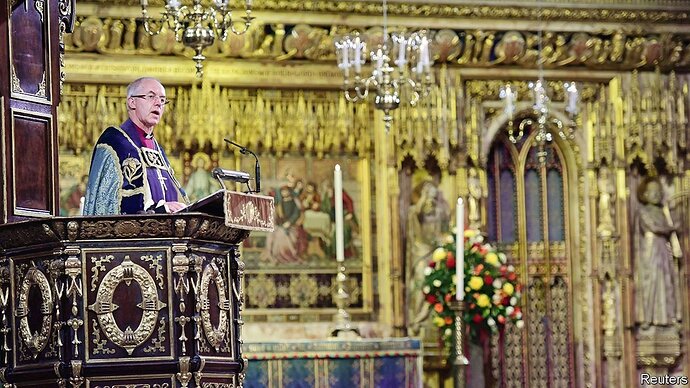 Lockdown has turned Christianity into a winner-take-all business

Religion seems to be as susceptible to this effect as sport

This article talks about how the most popular services are getting tons of viewers, while many less popular churches are struggling. “If you can attend any service, why not attend the best?”

Fwiw, that’s not my personal experience. I sometimes attend Sabbath services. But the services my temple offers are huge, and with several pages on zoom, it never feels very interactive. So I’ve been worshipping with a friend in Chicago whose minyan is typically about 15. That’s few enough that they don’t need to mute everyone. Few enough that we all fit on one page. I, personally, find it much more satisfying than the enormous minyan of my own congregation. Even though my temple does a technically far superior presentation, and has a religious…style closer to my preference.

To those who have attended services remotely, what have you been doing?

My situation is a little difference - I moved out of state at the beginning of June and was able to resume in-person pretty quickly. And before I moved, I knew I was moving so…why bother searching around?

Hypothetically- I definitely am not the type of person to do one church while everything is virtual and then switch when it reopens. I want to find a place with what I need (good teaching and a young adults group) and stick with it. But I haven’t had the very interactive services for a while pre-covid anyways, so it was less of a change for me.

I don’t want to exaggerate the “interactiveness” of my regular in person services. But i usually talk a bit with the people near me, i sing, i pray with the congregation. It just feels rather sterile doing that “on TV”.

I see. I do all that but found if I’m there with people I know vs by myself I really notice the difference. There alone vs virtual, I notice it less so. Though the songs part is more obvious.

On the bright side of virtual, I could control the music volume!

Well, there have been Masses on TV/live-streamed a lot before this. If it were simply a matter of watching a ceremony, Catholics could have been doing this before now.

That said, there is one component of Mass that cannot be replaced by mere TV-viewing, and that’s receiving Eucharist (which is why we have people, in normal times, who take Eucharist from Mass officially to people who are unable to attend due to infirmity. My grandma used to do this.) There’s a prayer for spiritual communion to be said for those watching instead of attending in person: Act of Spiritual Communion Prayer | EWTN

Anyway, I liked St. John Cantius for its services - that’s in Chicago. But I can go to my local parish, and have been able to since last May.

I attend a pretty small church. They’ve been doing masked, social distanced outdoor services for several months, while also offering online services. I think we’ve been in person twice since getting Covid, mostly bc it was cold.

Our online services have evolved. We’ve always been encouraged to check in via the chat function, and we’ve always had a time during the service when we are encouraged to reach out to another church member via text. If you don’t have someone’s # you can send the message via a pastor.

But in the last 2-3 months our pastor has added 2 or 3 discussion questions sprinkled through the service, which he encourages us to discuss at home or via the chat function. It’s been a great addition.

Also, mr aj had a second job during part of the pandemic & he was working on Sunday morning. I watched a lot of different services during that time, and then would watch our 5 pm service with him later. I really love The Brooklyn Tabernacle services, which seem to use recorded music from before the pandemic, since it would be the whole choir. I also really like the pastor there and had read a book of his several years ago. I also visited friends services in different states. I had them send me links.

The Pastor said a prayer blessing the elements that we were taking in our homes (berry juice in a cordial glass and Ritz crackers in the twig home) and we went through the rest of the standard liturgy.

Now that we’re back in person they have these pre-packaged wafer / juice combo packs set out on a table and we pick one up on our way in. Much faster than either intinction or passing the elements too, so added bonus. Only problem is that the cups are just a little bit wider than the little cup-holders in the pews. Maybe a different brand would fit better. I’ve been to one communion service at a different church that had similar but slightly different shape. That was a parking lot service, so no pew communion cup holders to worry about, but I bet that brand would fit in my regular church’s holders.

not nitpicking, but for remember for Catholics communion is not the symbolic bread and wine, but at the consecration becomes body and blood of Christ. So that miracle has not made it to the zoom era I believe, and so Campbell’s point about receiving Eucharist being impossible.

Yes, only those churches that consider the eucharist to be symbolic can do a zoom eucharist. I was surprised by twig’s post, but after thinking about it it makes a lot of sense.

remember for Catholics communion is not the symbolic bread and wine, but at the consecration becomes body and blood of Christ. So that miracle has not made it to the zoom era I believe

But it could. If God can transform the wafer and wine into the physical body and blood of Christ when the priest blesses it (or whatever he does) then I’m not sure why the physical distance from the priest to the elements matters.

Yes, only those churches that consider the eucharist to be symbolic can do a zoom eucharist.

Okay. I’ll defer to your expertise.

But it could. If God can transform the wafer and wine into the physical body and blood of Christ when the priest blesses it (or whatever he does) then I’m not sure why the physical distance from the priest to the elements matters.

You really don’t know what you’re talking about here (I highlighted the clue that you should have just stopped and dropped the subject).

I’m not a theologian, but there are certain requirements for the Eucharist, and we Catholics don’t have a telekinetic version of the sacrament.

If you’re talking about Anglicans/Episcopalians/Lutherans, then I will drop the subject, because I have no clue how they view sacraments.

This is a reader’s digest version and I can’t find great sources but in order to consecrate the hosts, the offering must be made at the alter and have some relationship with it. The words spoken, “take this”, “this is my body”, and “this is my blood” represent items in direct proximity to the priest. So while there is no direct limit on how close the hosts and wine must be to the alter, there needs to be some proximal relationship created between the alter, the offerings, and the priest in order for consecration (and transubstantiation) to occur.

I appreciate that this is the current view of the Roman Catholic Church.

I don’t think there’s any scriptural basis for a specific distance requirement for transubstantiation to occur. And clearly for the first few centuries of the Catholic church’s existence (assuming you accept their stance that St. Peter was the first pope and they have been in continuous existence ever since) communion was done in private homes as they had no physical buildings. They managed transubstantiation during this period.

More recently the Catholic Church has long had extensive and specific provisions for people to receive the Eucharist when there is no priest available, such as using elements that were previously consecrated by a priest and stored / transported in a specific way. (I said “blessed” before because the right word escaped me at the time, but what I should have said was “consecrated”.)

But to each church their own. I don’t really feel like arguing.

communion was done in private homes as they had no physical buildings.

I assume that the priest, the sacrament, and some table were all in proximity, though. After all, they didn’t have zoom, or even a telephone.

Certainly not where Jesus ate his final meal. That was done at a regular old table, not an altar.

But because Jesus replaced the animal sacrifices, which as you noted were done at an altar, the place that holds Jesus’s body and blood is an altar.

So basically… yes, represents the place where animals had their throats slit, although that’s not really what goes through our minds in church looking at it. But theologically that’s the basis / reason it has the same name.

(I feel like I once knew why Jews no longer feel the need to make animal sacrifices, but I no longer recall what that reason is, but I digress.)

When the temple was destroyed it became impossible to perform the sacrifices. Because God doesn’t require humans to do the impossible, it is no longer required to do them. But God gave the Jews prayers they could say to replace the sacrifices.

We haven’t had an altar in 2000 years, and i associate it with blood and gore. It was a large block of stone with “horns” one could grab, and a gutter for the blood. It’s very disconcerting to me that Christians refer to a tidy ornate table as an altar.

When the temple was destroyed it became impossible to perform the sacrifices.

Ah, yes, I knew that but forgot it. Thanks for refreshing my memory.

i associate it with blood and gore.
…
It’s very disconcerting to me that Christians refer to a tidy ornate table as an altar.

Does it help to consider the fact that on top of it is blood and flesh?