Willing to fight for your country? 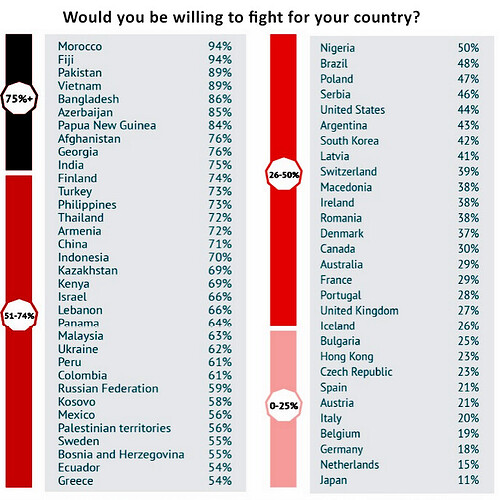 There is too an in-between for us duel citizen expats!!

proof that 56% of Americans voted for Biden

Really the more interesting question is if you’re willing to fight for your country if attacked vs you’re doing the attacking.

I think it’s implied that this is asking “if attacked”. At least that’s how I interpreted it.

I dunno, (some of) the countries with very low scores have a bad history of attacking others.

Should be “Would you be willing to defend your country”

proof that 56% of Americans voted for Biden

I, for one, welcome our ant overlords…

Can’t answer this question without more context. If it’s defending against an invasion like Red Dawn then sure sign me up.

Not joining the army. Not flying to where the battle is. Will do what I can to defend my home and family, if the fight comes to me

My first duty is to my family and making sure they are alive and I am alive to take care of my kids. That probably means fleeing and being a refugee over fighting. That would be my first option. If battle comes to me I would fight to defend my family, but like PatientZombie I am not joining the army to go out and fight.

If the US ever had to repel a legit invasion I would think a lot of people would want to be wearing those.

If it’s just Canada invading New England to consolidate their hold on the maple syrup market, I say let them have it.