Who won the VP Debate?

I know who I think won this one, but I want to hear other people’s opinions. Who won this debate and why?

I wasn’t entirely paying attention, but Mike Pence said that they did a top-notch job of handling the pandemic with the 210k deaths since it would have been millions otherwise, particularly when comparing to what H1N1 would have been if it was more deadly, so it must be true.

I think the ‘who won’ for most people will have been decided well before the debate started. Didn’t seem to be much new other than the same old talking points.

I’ve never really seen or heard Kamala Harris before last night. But out of the four pr/vp candidates, she’s the one that should be running for president. What a total asskicker. Politics aside, I could stand to listen to some more of her. Well spoken, rational, clear, forceful.

Official Webstore of Biden for President

I agree that Harris would make a better president than Biden.

Unfortunately, sexism and racism still prevail here and we are stuck with an old white guy. I’m hopeful though.

First things first though, gotta get IQ45 outa there with the whole lot of them.

I would say Harris won, by a fair margin. But it has nothing to do with this election.

She was strong, confident, stood by her team but was her own person.

He we strong, confident, stood hip-to-hip with his team and really did not have an identity of his own.

In 2024, when Biden is not running, Harris has herself already set up as the person to beat. Pence has himself set up as the quiet, non-psychotic soldier of Team Trump – I just don’t see how he uses this platform to leap off and become the star player.

As for how it impacts this election, Biden’s undecided voters will like Harris’ relative youth and vitality. Trump’s undecideds will like the balance a calm, rationale Pence will bring to Trump’s less-structured approach. And the debate won’t move the needle at all. Which means it’s a solid Biden win.

(I do believe, though, that if the House, Senate, and Presidency all go blue, it will not matter who is in the presidency. Pelosi and Schumer will run their own agenda, not look for direction from the executive.)

That’s my two cents, where probably 25% of it plays out the way I’m seeing it.

I agree with you.

I am hopeful that the Dems take both the senate and the WH.

And I loved her response to “packing the courts”

The one where, on the one hand, she didn’t say anything except to say she wasn’t anything.

And, on the other hand, she practically turned the camera and gave a big wink and a grin and “I surely don’t know what you’re talking about”?

Well it wouldn’t have played well to say “you betchyerass we’re gonna pack the courts, you sonavabitch!”

I mean - I would have applauded, but …

I was referring to her pointing out that of 50 new appellate judges, not one was Black.

And again - why is neither she nor Biden pointing out how McConnell refused to confirm ANY judges for 2 YEARS leaving all those seats for Dipshit.

They did what they could “within the rules” to pack the courts. I hope the Dems do the same and get back some balance.

People thought Harris did better overall, but the split between genders is interesting. 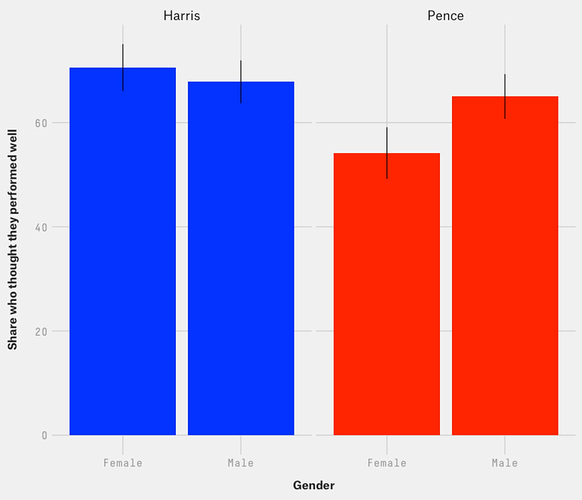 The numbers in that chart look weird. Are they allowing significant overlap where people think they both “performed well”?

I also thought that Harris won. The debate started out with her just absolutely ripping the Trump administration on their handling of COVID and Pence never really had a good response for that. I think it’s something that will resonate with a lot of voters.

One thing that was pointed out by commentators was Pence strategically called out PA and his support for fracking. I think tactically he did about as well as he could, but on substance he was fighting a losing battle.

Harris made a mistake I think by bringing up her career as a prosecutor. It gave Pence an opening to attack her record. Although I don’t know how much his remarks on that helped him given his base.

Biggest takeaway was really the questions the candidates refuse to answer, especially the Trump administration’s continued refusal to commit to a peaceful transfer of power should they lose the election.

The numbers in that chart look weird. Are they allowing significant overlap where people think they both “performed well”?

Yes, it was separate questions for each person if they performed well or poorly.

538’s Ipsos poll partner shows that before and after the debate people are just as likely to vote R/D as they were before the debate, but the overall favorability rating of Pence stayed at -14 while Harris went from +5 to +10 favorability. https://projects.fivethirtyeight.com/harris-pence-vp-debate-poll/