What's going on with e-mail notifications?

Here’s one from today:

I have now idea why it’s starting with “Twig93 via GoActuary” It is a reply from actmds, as indicated slightly further down. I don’t think Twig even posted in that thread.

And WTF is the “TG” avatar in both places. It’s not the current avatar for either.

I think (but haven’t verified) that there are others with this exact same format. There definitely are others (here’s one) that does not mention Twig, but does “inherit” the “TG” avatar from somewhere.

(Maybe that one would like to mention Twig at the top, but it’s overwritten by an ad generated by yahoo mail)

Unclear, but is it a yahoo thing maybe?
How are you getting these, are you subscribed to a post?

My emails look normal. I think the TG at the top is yahoo trying to make a contact out of the email address - at least that’s what Outlook looks to be doing on mine (but it’s TV instead of TG).

Yeah, mine are normal as well.
Steve, I think BF is correct - it’s yahoo. At somepoint there’s been an email from the forum from twig or a thread twig started, or something like that, and Yahoo is associating noreplay@goactuary.com with username Twig - and then generating that image. I don’t think that’s from here.

Unclear, but is it a yahoo thing maybe?
How are you getting these, are you subscribed to a post?

Who knows? I don’t even know how to subscribe to a post. Both of those, and I think all the others have been notifications that someone has posted a response to one of my posts. But I don’t get them every time someone responds to one of my posts. For example, I did not get one when you responded to my post in this thread.

It may well just be a yahoo thing. :shrug:

How are you getting these, are you subscribed to a post?

This is probably the reason, from my profile:

And then I probably didn’t get anything about your reply since the site had seen me in the last 10 minutes.

Wonder if I should turn that off. It doesn’t seem to add much value in my situation.

I’m guessing you have the notify when quoted response on. So this would send the email. Here’s where you set those options- 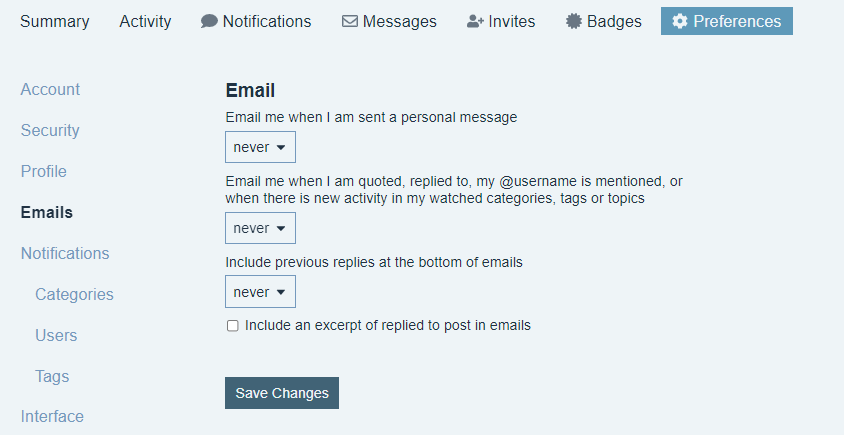 I still use yahoo mail. I opened a yahoo account over 20 years ago, well before gmail even existed. I’ll probably keep it out of convenience until I’m forced to move it. I’ve only had 2 main personal email addresses ever: an aol one from back in the real email stone age and the yahoo one. I’ve occasionally opened other dummy accounts just to sign up for things that I thought would just get spam.

However, I don’t subscribe to any email notifications from here. I wouldn’t like that, but I’m sure it’s a nice option for those that like it.

FWIW, you are also counted as a Twig by my yahoo.

Steve, I think BF is correct

Thanks for this. Now all of my posts will be endorsed by you!

FWIW, you are also counted as a Twig

We are all Twig