It seems like there just aren’t enough vaccines to go around, and maybe not enough people helping to distribute them. My city has had a call for volunteers to help for a little while now.

My general proposal and question is - why can’t the government step in and use “emergency powers” or something to change the vaccine game. There’s lots of companies out there still trying to make their own vaccine, when we have 2 viable options. Can/should the government come to some sort of arrangement between Moderna/Pfizer and J&J, Eli Lily, etc to produce vaccine with Moderna/Pfizer formula and get paid for production, while Moderna/Pfizer still get paid some percentage on the formula.

This also seems like a good time to maybe employ some people short term to help facilitate distribution of vaccines that are out of jobs. So why not pay people to work and do this? It seems mostly like registration/admin type work…Or really partner with CVS/Walgreens/etc to roll it out.

Just throwing some thoughts out there…This seems like a problem that could be solved quickly.

why can’t the government step in and use “emergency powers” or something to change the vaccine game.

One consideration to this question resides in what precedent is going to be set? If the gov’t steps in and “mandates” certain actions take place by the private sector, what other situations are going to result in a similar mandate being issued? Where do we draw the line to prevent a dictatorial/authoritarian gov’t from developing.

Another is the expectation of companies for the gov’t to fund any change-over costs to act on the issued mandate?

I mean, really I’m not sure mandate is the right word, but facilitate? And yes, the gov’t can potentially fund those costs. You can have audits after the fact and say you can’t make more than X% or something as part of the arrangement. I’d assume that if that were the arrangement then companies wouldnt want the bad publicity associates with trying to make too much off of the pandemic…(maybe)

I think the gov’t has the power to take this stuff over as is as part of emergencies. Wartime i know, but i thought it was used last year as well for some things a well?

I think there are non-governmental plans proceeding.
Sanofi

The EU is pissed at AstraZeneca but probably deserves a fair share (if not lion’s share) of blame for delaying its order.

I still think the bottleneck is in distribution rather than production. If you could snap your fingers and have a billion doses it would still take months to use them all.

Maybe you missed the fact that Biden’s inauguration day executive orders included one to use the Defense Production Act.

The order invoking the Defense Production Act is to increase the supply of all the materials needed to get the vaccines into arms and ramp up testing. The order covers N95 masks and other protective gear, testing machines, rapid test kits and [syringes capable of maximizing the amount of Covid vaccine that can be extracted] 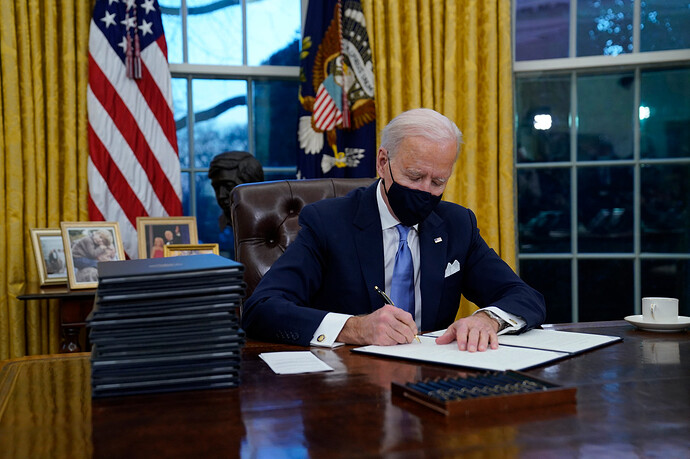 Topping Biden’s list is an order invoking the Defense Production Act to increase the supply of vaccine-related materials and to ramp up testing.

Vaccine production is probably pretty complex. Pfizer and Moderna in particular are using a different approach to vaccines than has been used before. There is likely a significant ramp up in production capacity. If Pfizer is making big profits on marginal sales of their vaccine, they can outsource steps if they think that would increase sales. Note that other drug companies may be working on their own vaccines, which may use single doses and less refrigeration. I don’t think I would want to tell them to divert resources away from that.

And yesterday’s news was that the federal govt expects to buy another 200 million doses (100m each from Pfizer and Moderna) increasing the “by this summer” purchase of vaccine to 600m doses, or enough to immunize 300 million people, about the adult population of the US. Assuming there will be some waste, but that some people will refuse to be vaccinated, that’s enough doses.

And the J&J and Astrozeneca will likely have vaccines approved in the US in the not-so-distant future.

I mean, I’ll believe it when i get my second shot (I’m near the end of the list) but the recent news suggests our govt is using emergency powers to get us vaccine.

And don’t forget, the Biden administration inherited zero vaccine distribution plans, so they’re starting from nothing. I’d imagine it might follow the same pattern as testing. In my state, testing really ramped up about 2 months, then again after another 2 or 3 months. We might see the same with vaccination. There are a lot of technical challenges. A lot.

Zero plans is false. I think you can fault Trump admin for not having an adequate plan, but it isn’t entirely a federal thing, either. I don’t doubt a president who gave it the right amount of attention could have done better.

A lot of talk about distribution and and production. Hard to say what could have been done to produce more, but it makes sense that that would be the problem. Only so much throwing money at a problem near the end of a process can speed things up.

I’d like to distinguish distribution from administration though they’re similar. Distribution has been going fine, from a pure perspective of shipping the vaccine.

Administration is what I’d like to see get discussed more. IMO no reason to have vaccines distributed but not administered. We should be closer to 80-90% of distributed vaccines being administered, but are no where close.

Zero plans is false. I think you can fault Trump admin for not having an adequate plan, but it isn’t entirely a federal thing, either. I don’t doubt a president who gave it the right amount of attention could have done better.

“zero is false”? Maybe if you want to be very, very specific, like if a tornado came through and destroyed my house I am not starting from scratch.

You can’t say it was absolutely not usable at all.

I think there are plenty of things to criticize Trump admin about without needless exaggeration.

I will expand with more quotes from the article:
“We’re certainly not starting from scratch, because there is activity going on in the distribution,” Fauci told reporters during an appearance in the White House briefing room.
…
Operation Warp Speed was responsible for allocating and delivering vaccines to states, but the responsibility for the “last mile” of distribution, including getting shots into arms, was delegated to the states.
…
But despite the complaints, states are still averaging close to 900,000 vaccinations a day.

Biden has promised 100 million vaccinations in his administration’s first 100 days, but many experts have noted that the pace will have to be much faster in order to reach herd immunity by the fall.

So the pace as of 1/21 (article publish date) was about what Biden (initially) promised over the next 100 days. If it were just 1m/day that would be a 11% improvement over current rates. He has since increased the target to 150m/100 days. I hope it will be higher, and expect it will.

I would have liked the formatting to look better (in this case make clear what was in the article vs my words), but still learning this board.

I’m glad the vaccine production was fast tracked and all, but am I alone in thinking that “Operation Warp Speed” sounds like it was named by a 7th grader? I can’t help but roll my eyes when I hear it referred to.

No, you are not alone in that.

“Space Force” was supposed to do that.

May as well have called it Star Command

You’ll be happy to know the name “Operation Warp Speed” has been retired. I mean, if you choose a name like that and don’t name Shatner as your spokesperson, you’ve failed on day one.

I look forward to reading the inevitable (fake news) Npr, Pro-publica / NYT exposes on how the process was such a cluster___.

But at this point I think it’s water under the bridge. Covid cases are already dropping like a rock.

I also look forward to reports from the conservative media saying the end of the pandemic is due to Trump because he was president during the vaccine development. But anyway.

Are cases dropping like a rock? I haven’t been tracking lately. Oh sure, dropping, yeah. Like a rock, though? Not quite.

Also, so few Americans have received their second dose, it’s unlikely the drop has much to do with the vaccine at this time. My guess is that the people who are being vaccinated first aren’t the people who are primarily responsible for spreading the virus. So I don’t think there will be a big impact on new cases at first. The hospitalization and death rates will start dropping first.