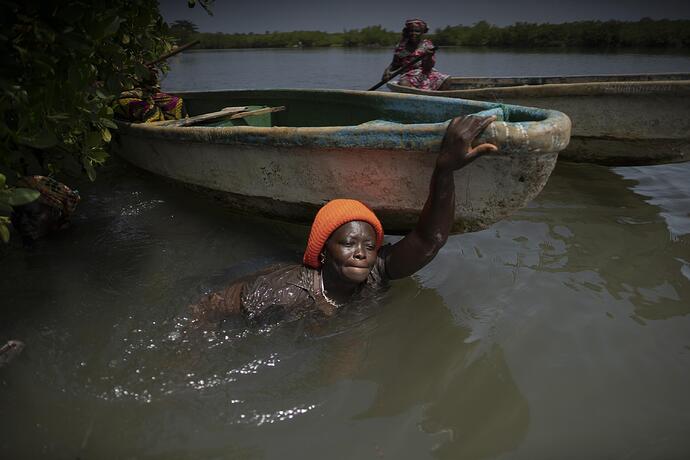 SARE GIBEL, Gambia (AP) — The health outreach workers who drove past Lama Mballow's village with a megaphone handed out T-shirts emblazoned with the words: “I GOT MY COVID-19 VACCINE!” By then, the women in Sare Gibel already had heard the rumors on...

Honestly I’m not sure if Covid vaccination is the best use of healthcare dollars in Africa. There are so many other endemic diseases that are higher risk to the on average much younger population there.

I mean, I think Ebola is still happening in some areas now.

I mean FFS, let’s get EBOLA under control. If that bugger mutates we’ll be wishing we were still worrying about Covid. 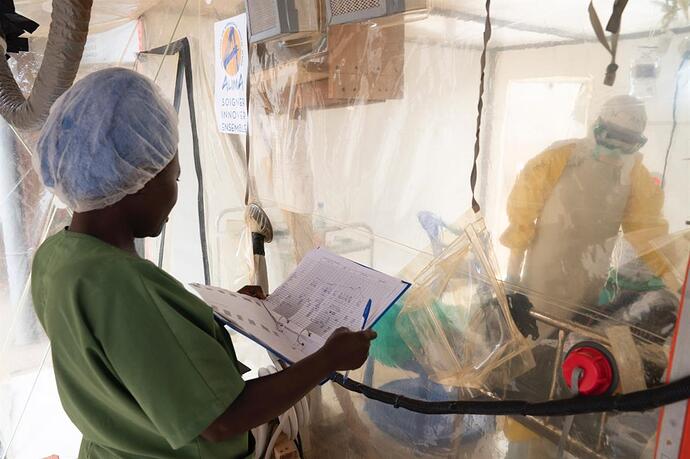 I don’t believe covid money is taking anything away from Ebola money. To a minor extent, they are complimentary, as developing infrastructure to deliver vaccines means you can reuse that infrastructure.

The adenovirus vaccine category (j&j, AZ) was first used in the Ebola vaccine. That was controversial, too, because there were concerns that western scientists were experimenting with a new vaccine (a whole new category of vaccine) on Africans. Weirdly, one thing that helped was that the first human use of the vaccine was a white woman who helped develop it, who was accidentally infected with a test specimen or something. She decided to inject herself with the vaccine she had helped create, and it appeared to protect her.

I wonder if i can dig up that story.

You could be right, but I think in general local healthcare budgets are quite limited, and donour pockets are limited, so I think more investment for Covid crowds out other healthcare spending.

There’s actually a lot of “new” money for covid, not just because it is a new disease, but also because people in wealthy nations are afraid of new variants developing in poor parts of the world and then attacking then at home. Global pandemics having global impacts, and all that.

There’s actually a lot of “new” money for covid

My suspicion is that “new” money has caused a reduction in money for other healthcare needs in Africa.

Malaria is far more dangerous to the average person living in Africa than Covid.

Most of the covid vaccines were developed by hijacking existing research into new flu vaccines. But some of the new developments are already being used towards Malaria research.

So… I agree that Malaria is humanity’s greatest unmet medical need. But I’m dubious that covid money will ultimately hurt that goal.

While it’s a big step forward, that’s a crappy vaccine with a 30% efficacy against serious disease, that requires three doses.

There’s lots of room for improvement.

When there is nothing else, 30% looks much better than nothing.

Here’s an interesting collection of data on the relative frequency of a bunch of conditions between vaccinated and unvaccinated, and between those infected with covid and those not infected with covid. It’s from Israel, so the vaccine is all Pfizer/BioNTech.

Adverse Effects after BNT162b2 Vaccine and SARS-CoV-2 Infection, According to Age and Sex | NEJM

My read on it is that the only risks to the vaccine that look significant is myocarditis in young men, and swollen lymph nodes in everyone. And maybe herpes in young women and older men.

And the risks of infection that look significant include myocarditis in all the groups (old and young men, old and young women) and also heart arrhythmia in those older than 40, deep vein thrombosis on those over 40, intercranial hemorrhage (stroke) in older women, heart attacks in those over 40, pulmonary embolism in every group, and Thrombocytopenia (low platelet count) in those over 40.

This could go in any number of COVID-19 threads, but posting it here for the vaccine hesitancy angle: people in Europe that are vaccine hesitant are attending COVID parties in order to get a green pass (either need to have been vaccinated or have recovered from COVID). This guy went to a COVID party and died: 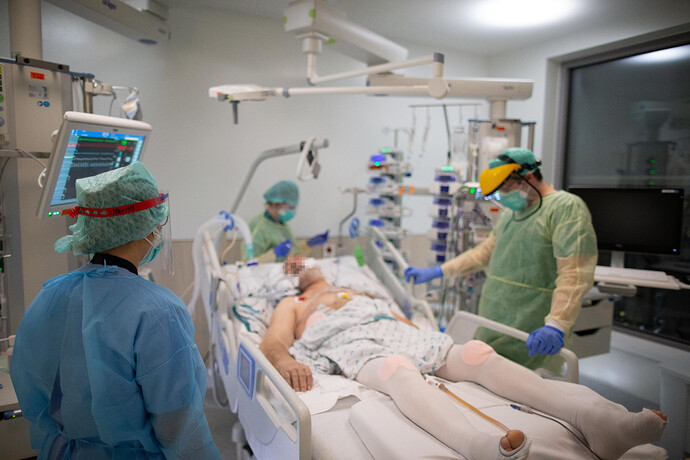 Some young people are deliberately attempting to catch COVID-19 in order to build immunity from the virus, an official has said.

That strategy works really well with diseases that are not fatal.

You could, but these COVID parties are gatherings where they know another attendee has it and are trying to catch it. Granted it probably true somebody has COVID in any crowded indoor situation where there are a significant # of positive cases in the community.

Gosh it makes me wish there was a way to expose your immune system to a deadly virus without the ‘deadly.’ WTF science. Get on that.

As far as I know, my friend came up with this analogy. He worked for Boeing as an engineer, FWIW (I don’t actually know if he still does - we haven’t connected for many years outside of the occasional facebook post).

On October 28th, 2018, Lion Air Flight 610, a Boeing 737 MAX, crashed into the Java sea minutes after takeoff, killing all 189 passengers and crew. Initially, Boeing was reluctant to identify the cause of the crash until a few months later when another 737 MAX, Ethiopian Airlines Flight 302 met the same fate, killing all 157 people aboard. It was finally revealed that the Maneuvering Characteristics Augmentation System (MCAS) was getting bad data from an angle of attack sensor and forced the nose of the airplanes down. The 737 MAX was grounded worldwide.

Here’s where it gets weird.

People needed to fly and airlines really wanted to use their brand-new airplanes, so after a few weeks, some airlines decided they didn’t want the FAA telling them what to do, so they ignored the grounding and flew their MAX’s anyway - and many of them crashed, killing thousands.

The FAA finally learned that if pilots slowed their rate of ascent, there was much less risk that the MCAS would get a bad reading. But because of altitude restrictions, they would have to alter their route, making flight times significantly longer, which was terribly inconvenient for all passengers and crew, causing them to miss connecting flights and important meetings.

The FAA found it difficult to regulate using slow climbs, so they left the decision up to the pilots. The pilots would then address the passengers before each flight and ask them to vote on whether to use a slow climb, which would lengthen the flight time by an hour, or use a standard climb, which would slightly increase the risk of the MCAS forcing the plane’s nose into the ground. Surprisingly, sometimes the majority of the passengers had places to be, were willing to accept a small risk, and/or didn’t trust any guidance from the FAA. So they would vote for a standard climb and occasionally the MCAS would engage after takeoff. Some pilots were able to recover from the nose dive and others were not, leading to dozens more crashes and thousands more deaths.

Software engineers had been tirelessly working on an effective solution since the first crash. After more than a year, they finally developed a fix that would allow the airplane’s computer to recognize the bad angle of attack data and prevent faulty MCAS engagement. This fix was eventually approved by the FAA and a switch was installed on all 737 MAX aircraft, lifting the grounding requirement and seemingly resolving the issue. However, some pilots were wary of using the switch because the fix was developed quickly, they didn’t understand all the lines of code in the fix, and they were concerned it might affect other avionics software. So again, the FAA found that they were unable to force pilots to use the switch and left that decision to their discretion.

The standard captain’s pre-flight address went something like this:

“Welcome aboard, folks. The doors are sealed and we’re ready to depart, but before we push back from the gate, we need to let you know that this aircraft has been equipped with an MCAS override switch. We know you have a choice when you fly, so if you’d like me to use that switch, please press the attendant call light above your head and our attendants will come through the cabin and count up the votes. If you choose not to use the switch, we’ll vote on using a slow climb. Just be aware that if we don’t use the switch and use a standard climb, we’ll likely arrive on time, but there will be a greater chance we’ll fly into the ground right after takeoff. Sit back, relax, and enjoy your flight.”

And still, on many flights, the passengers exercise their freedom to not use the switch or the slow climb, and some of those flights end very quickly and tragically.

Some local regulatory agencies have gone as far as telling pilots they cannot use the switch or slow climb. Airlines flying out of Florida and Texas, for instance, are fined if they use the switch, so they don’t even take a vote. The consequences are devastating.

Some automotive engineers found that anti-lock brakes were effective at preventing car crashes, so they suggested that when experiencing an MCAS-driven nose dive, the pilot should deploy the landing gear and pump the wheel brakes repeatedly. Unfortunately, this was not effective.

There was shock after the first crash, outrage after the second, and an intense focus to find the cause and prevent future tragedies. Those first 346 victims and their families deserve a solution and they deserve to have people use that solution.

Currently, on average, every two and a half hours another 737 MAX with 180 people on board crashes in the United States alone. Imagine for just a moment, a newspaper that prints 10 issues every day, with the front-page headline on each one of those issues announcing yet another 737 MAX crash and listing the 180 victims. I’m tired of hearing the statistics, but bad news fatigue shouldn’t be an issue. We know the cause of almost all of these deaths and we have a fix that would prevent thousands and thousands more.

Then a quick comment he made, in case you need help following:

I don’t want anyone freaking out that airplanes are actually falling out of the sky, so I’ll go ahead reveal that this isn’t about airplanes at all. To spell it out:

I’d love to hear from anyone about where the analogy breaks down. Having just passed the staggering, grim number of 800,000 in the US, I think we’re all just numb to the fact that there are thousands of preventable deaths worldwide every day.

Meh. I’ve seen worse analogies, many of them here on GoA or AO, but it’s been a while since I’ve seen a weak analogy so painfully belabored.

Yes. I was smart enough to recognize the analogy without it needing to be spelled out.