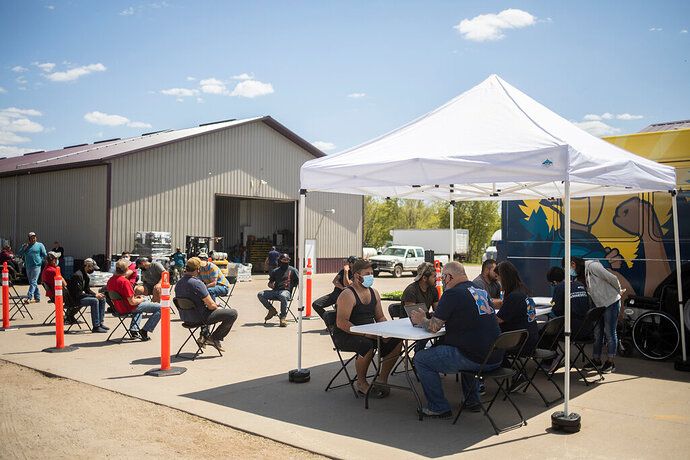 The biggest vaccination gap isn’t based on race or partisanship. It’s based on class.

Interesting article in the NYT free newsletter today. According to a poll done by Kaiser, the real gap in vaccine uptake is between those who’ve been to college and those who haven’t. The poll asked if you
1 are vaccinated
2 plan to get vaccinated ASAP
3 want to wait and see
4 will only get vaccinated if required
5 definitely won’t get vaccinated

Their analysis is less interesting than the data, though.

Wonder what the result would be w/o the artificial grouping.

I do not see why 2 & 3 were grouped, though. many planning on getting vaccinated “ASAP” could just be likely to be already fully vaccinated if supplies didn’t restrict them from getting one sooner.

I think anyone in the US who wants to be vaccinated ASAP, but hasn’t, yet, is likely lower class. Because what are the remaining barriers? Having to work an inflexible schedule. Not having access to transportation. ?? Most upper class people who want to be vaccinated have been.

I wondered about that, too. Maybe I’ll look up the original study at some point.

Another “lower class barrier” would be the lack of flexible work schedule or sick time if even mild vaccine side effects arise.

So few jobs have legitimate sick time and people cannot afford to risk taking an unpaid day or two to recover from brain fog and fatigue.

2 & 3 grouped together definitely look like they were trying to force a usable result from this study.

Naw, they could have just published “vaccinated” and “unvaccinated” and gotten the same results. But yes, they were trying to simplify down to the story they wanted to tell, I assume.

Thanks, I was going to post the story if you hadn’t beaten me to it.

In many facets of life (not all) race serves as a proxy for class. I’m not surprised that vaccination turns out to be one of them.

Certainly my upper middle class Black husband was eager to get vaccinated and his mostly middle class family was too… to the extent that I’m aware of their positions on vaccination anyway.

Agree that I have not see a huge political divide (some, but smaller than expected).

Then why is there a need for “three categories”?

[runs off to read article]

Couldn’t complete the article before it wanted me to create an account.

What I did see is that the “4&5” group seems to be very comparable across race. And this grouping makes a lot of sense to do.

Goes back to why the grouping of 2 with 3.

Agree. And come to think of it, a lot of my husband’s family members are NOT college educated, but the ones loudly calling for vaccination ARE middle class.

His aunt & uncle that we are closest to are both retired NCOs in the Army. They aren’t college educated but they have a gorgeous home and drive BMWs and AFAICT have their financial life in order. They are loudly calling for people, especially POCs, to get vaccinated.

both retired NCOs in the Army

There is a different sort of education involved in this achievement. One that I would value far more than a college education, FWIW.

I agree! But in the NYT classification they’d presumably be lumped in with the non-college graduates.

Here ya go, apologies if the formatting isn’t great.

It is common to hear about two different demographic groups that are hesitant to receive a Covid-19 vaccination: Republican voters and racial minorities, especially Black and Latino Americans.

The two groups seem to have different motivations. For Republicans, the attitude is connected to a general skepticism of government and science. For Black and Hispanic Americans, it appears to stem from the country’s legacy of providing substandard medical treatment, and sometimes doing outright harm, to minorities.

These ideas all have some truth to them. But they also can obscure the fact that many unvaccinated Republicans and minorities have something in common: They are working class. And there is a huge class gap in vaccination behavior.

Here is a look at vaccination behavior by racial groups and political identification, based on polling by the Kaiser Family Foundation:

Here are those same groups subdivided by class, using a four-year college degree as the dividing line between working class and professional: 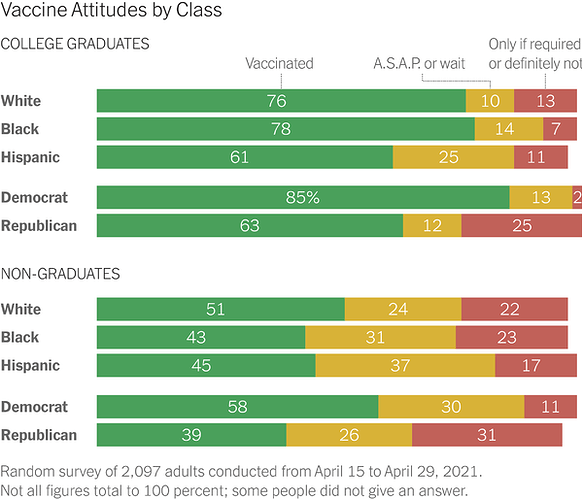 As you can see, working-class members of every group are less likely to have received a vaccine and more likely to be skeptical. “No matter which of these groups we looked at, we see an education divide,” Mollyann Brodie, who oversees the Kaiser surveys, told me. In some cases, different racial groups with the same education levels — like Black and white college graduates — look remarkably similar.

This poll did not break out Asian-Americans, but other Kaiser surveys have, and it’s consistent: Asian-Americans have a higher median income than Black, Hispanic or white Americans and also a higher vaccination rate.

All of which points to the fact that the class divide is bigger than the racial divide.

There are still differences by ethnicity, because racial inequities are a reality of U.S. life. Many Hispanic Americans, across social classes, say either that they want a shot but have not yet received one or that they are waiting to see how the vaccines affect other people. And there are even bigger differences by partisanship, with many Republicans, including professionals, skeptical of the vaccines.

But you can’t understand the country’s struggle to vaccinate everyone — and save thousands of lives — without understanding the class gap.

The story here is bigger than Covid-19. Last year, the economists Anne Case and Angus Deaton published a book called “Deaths of Despair and the Future of Capitalism” that documented a growing class divide in one area of American life after another.

Income and wealth have grown much more quickly over recent decades for people with a bachelor’s degree than people without one. Marriage, church attendance and self-reported happiness have declined more for the working class than the professional class; chronic pain, obesity and alcohol consumption have increased more. As the title of the book indicates, life expectancy has also diverged, partly because of deaths from alcoholism, drug overdoses and suicide.

Case and Deaton, who are Princeton professors, argue that behind these trends is a “coming apart” of the working-class experience. For many people, life lacks the structure, status and meaning that it once had.

Frequently, people are not officially employed by the company where they work, which robs them of the pride that comes from being part of a shared enterprise. They don’t belong to a labor union, either. The timing of their work shifts can change unexpectedly. Many parents are trying to raise children without a partner.

These challenges can interfere with Covid vaccination in multiple ways. Carving out the time — to do the logistical research, get the shot, cope with side effects and schedule a second shot — can be hard. Working-class Americans also have less reason to trust public health officials; if you had suffered the damaging “coming apart” of the past few decades, would you trust people in positions of authority?

After I described the vaccination trends to Case and Deaton, they sent me some broader data on life expectancy, by both race and class. It shows a significant Black-white gap. But that gap has not grown over the past decade. What has grown is the life expectancy gap between college graduates and non-graduates, among both Black and white Americans.

“Though race divisions continue,” Case said, “education is becoming more important relative to race, and perhaps that might be true for vaccinations, too.”

The growing class divide in living standards is one of the country’s greatest problems, and it obviously will not be solved before the pandemic ends. But public health experts believe that there are specific strategies that can narrow the vaccination divide.

One is information. About 25 percent of unvaccinated people remain unsure whether somebody who previously had Covid should still get the vaccine, according to Kaiser. The answer is yes: Almost everybody 12 and older should.

Another promising strategy is making shots even more convenient. Employers can help by hosting on-site vaccinations and giving workers paid time off — including the day after the shot for people who experience side effects. Drugstores and supermarkets can accept walk-ins, as some already do. Government officials can send mobile, walk-in clinics into more communities. (Text your ZIP code to 438829 — or text “VACUNA” for Spanish — and you’ll find your local options.)

“We’ve just got to remove all the barriers,” Brodie said.

Finally, friends and relatives can turn a vaccination into something more than just a shot. “Say, ‘Let’s do this together. Let’s do something, so if you get vaccinated, let’s grab dinner after. Let’s celebrate together,’” Dr. Edith Bracho-Sanchez, a New York pediatrician, told CNN.

The U.S. is on the verge of victory over Covid. But the disease remains a threat to millions of Americans. The illness and death that occurs in coming months is likely to aggravate the country’s already extreme inequality.

I think that “wait and see” and “only if required” should be combined.

Yep, it would be great to see all 5 categories individually, but if they need to be combined, it seems like a more logical split/combo would be

Without seeing the individual category data, it’s impossible to say for sure, but based on what they showed using their categories, it doesn’t appear that this alternate grouping would significantly change the conclusions.

Well, you can get a lot of slices by the 5 categories directly from KFF, although they don’t seem to have published the one the NYT talks about today. I can’t find the underlying data, perhaps the NYT got special access. 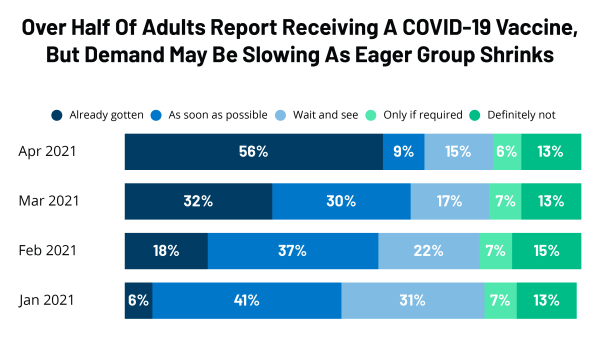 Most adults nationally say they have gotten at least one dose of a COVID-19 vaccine, and few say they haven’t but want to do so right away, posing a new challenge for the nation’s vaccination effor…