Things that map to partisanship

Chain restaurants (and commuting by car)

Analysis | The most common restaurant cuisine in every state, and a... 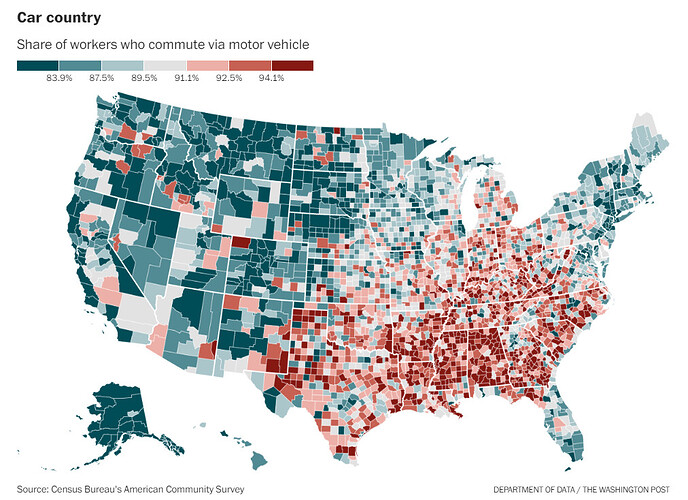 In the end, we identified one factor that transcended politics and explained the presence of chain restaurants throughout the nation: driving. Specifically, the share of the workforce that drives to work each day.

The places that drive the most tend to have the same high share of chain restaurants regardless of whether they voted for Trump or Biden. As car commuting decreases, chain restaurants decrease at roughly the same rate, no matter which candidate most residents supported.

If the link between cars and chains transcends partisanship, why does it look like Trump counties have more chain restaurants? It’s at least in part because he won more of the places with the most car commuters!

About 83 percent of workers commute by car nationally, but only 80 percent of folks in Biden counties do so, compared with 90 percent of workers in Trump counties. The share of car commuters ranges from 55 percent in the deep-blue New York City metro area to 96 percent around bright red Decatur, Ala.

Also, a nice map that shows you where the urbanized areas are: (and also what the “chainiest” areas are, too, but mainly so you can see what the urban sprawl looks like in the U.S.) 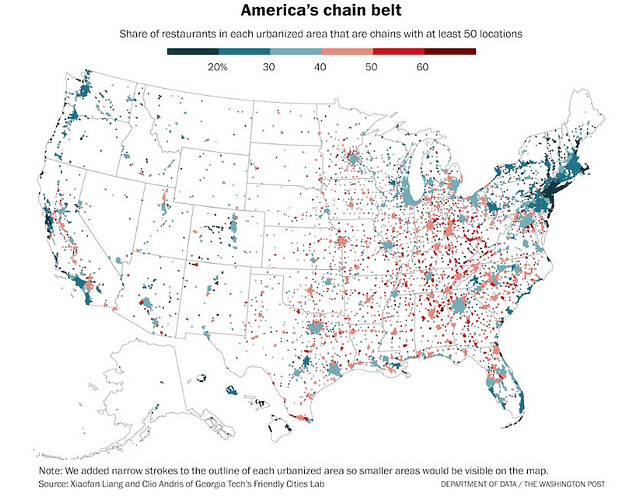 Is Starbucks considered a chain restaurant?

Yes, that’s a fun map of urban areas. It’s interesting that in the Midwest there are “urban” places that seem to be beads on a string. I expect that would make sense if we overlaid a map of railroads in 1900.

Also, the thin urban strings right on the coasts. People really like to live near the water.

The “how do you get to work” map as relatively low auto commuting rates in some very rural areas. That seemed odd until I realized that farmers/ranchers are going to report that they do not drive to work.

Doesn’t look like it really fits here, but still… 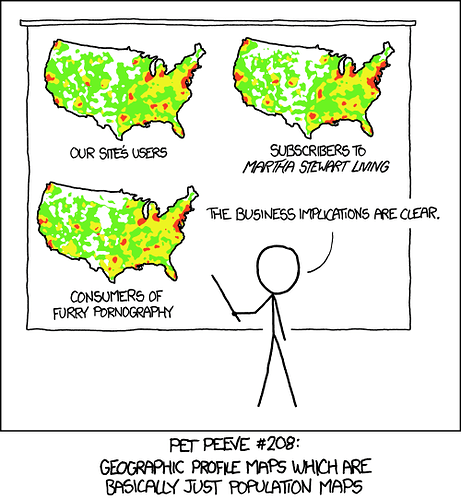 There are also a lot of global versions of this map showing traffic to English-language websites which are indistinguishable from maps of the location of internet users who are native English speakers.

and while this really doesn’t fit w/ my thread theme, I liked this map in the original WaPo piece: 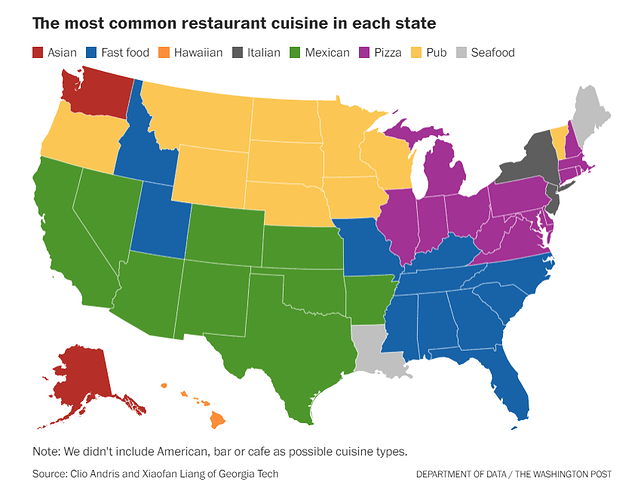 Note that Italian restaurants are most popular in NJ & NY, and these are distinct from pizza places.

Why does “Hawaiian” get to be it’s own cuisine, but Cajun don’t? Food for thought.

This map shows one.

(and, Asian food is more popular than seafood in Alaska?)

That is amazingly idiotic analysis and grouping.

In the touristy parts of Hawaii i visited, i would have guessed seafood restaurants outnumbered anything i would call “Hawaiian”.

I’m not entirely sure what Hawaiian food means. Seems to be a mixture of Japanese food, local Luau food, and some fried American influence, and Spam musubi (<3)

Seems to be a mixture of Japanese food, local Luau food, and some fried American influence, and Spam musubi (<3)

And poke, which is truly Hawaiian.
And the presentation as plate lunches.

This is a restaurant near me that is delicious 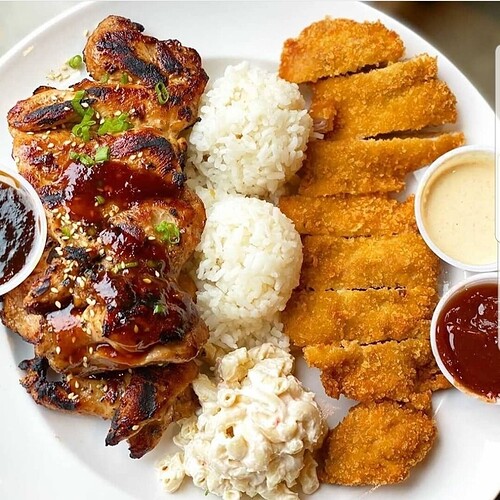 Ono Hawaiian Plates now offers Take Away - Order Online and Take Away from our location at The Galley in Minneapolis, it will take 20 minutes. 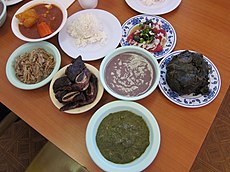 The cuisine of Hawaii incorporates five distinct styles of food, reflecting the diverse food history of settlement and immigration in the Hawaiian Islands.[a] In the pre-contact period of Ancient Hawaii (300 AD-1778), Polynesian voyagers brought plants and animals to the Islands. As Native Hawaiians settled the area, they fished, raised taro for poi, planted coconuts, sugarcane, sweet potatoes and yams, and cooked meat and fish in earth ovens. After first contact in 1778, European and American ...

loco moco is as well

There used to be this Hawaiian Fried Chicken place in West Seattle (Whiskey might know the place I’m taking about) that unfortunately didn’t survive COVID. But they were the perfect example of Hawaiian Cuisine. Proper southern fried chicken with sides like rice, soy sauce, kimchi. That’s Hawaiian Cuisine. A fusion of American, Pan Asian and South Pacific foods. With a side of rice and macaroni salad.