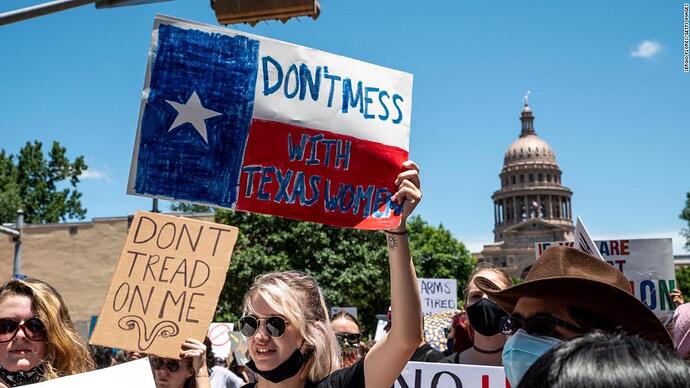 A controversial Texas law that bars abortions at six weeks went into effect early Wednesday morning after the Supreme Court and a federal appeals court failed to rule on pending emergency requests brought by abortion providers.

I’m cetainly not “pro-abortion” - I don’t know that anyone is really yeah, everyone needs to have an abortion, we need more of those in this country, I think we’d all prefer fewer abortions but more actions that prevent pregnancies up front that are grounded in reality, not pie-in-the-sky abstinence is best dreaming - but I have all kinds of concerns with this law, especially the notion that an individual can file a civil suit and collect damages without demonstrating any kind of injury related to the action.

I’m sort of (but not really) shocked that Alito didn’t issue an emergency stay against it, but then again Alito has shown over time he’s disconnected with any semblance of actual interpretation of the law and is increasingly more about pwning the libs.

Pro-Birth Crowd 5, Everyone Else 4 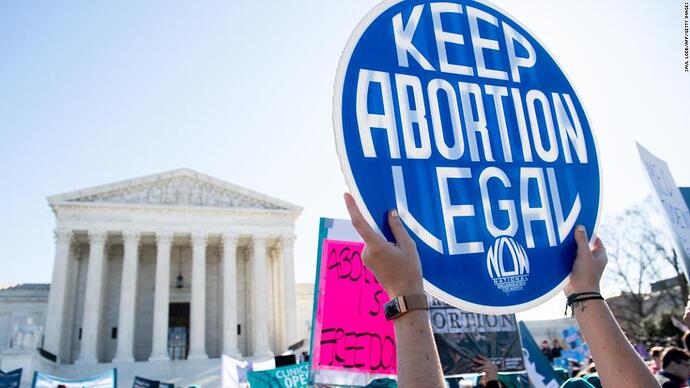 I saw comments today that COVID has more reproductive rights in Texas than women do.

Even if abortion should be outlawed (and i don’t think it should be) this seems like the most terrible way possible to do it: enforcement by tort.

I suppose the counter argument might be that this is the only way politically possible.

But politically speaking i think abortion may end up working better for conservatives as a political fantasy to sway voters rather than as a flesh and blood policy.

What will happen first? Will a pretty teen die from a botched back alley abortion? Or will a pretty suburban mom get sued for trying to get her daughter an abortion? Whatever happens, it will probably happen on youtube and tic rock. It may make those provocative pictures of abortion remains look tame.

i am amazed at the expansion of “standing” from a tort perspective. literally anyone can sue you. insane IMO

So someone who drives a pregnant raped by her father 12 year old to get an abortion at 6.2 weeks could legally be sued by a few million people? Is that how the law works?

That’s my understanding - but IANAL.

This has got to be the worst law I’ve ever seen, but again -IANAL

Wonder what happens the first time a politician’s mistress needs to remove that unwanted fetus?

Allegedly, the law defines conception as the last day of a woman’s period so it would only be 4-5 weeks. I’ve not read the law, so I can’t confirm that’s the case.

This law + SCOTUS’s decision opens the door to creating any law that prohibits any (currently) perfectly legal but morally questionable action via the use of the civil court system. Interracial marriage? Blacks/Latinos (both) attending a public school? Expression of LGBTQ+ views? All of those could be shadowbanned by a law saying “if you see someone doing this, you can run to a courthouse and sue everyone involved with it and collect a minimum of $X in damages” and SCOTUS has inexplicably held well, this is beyond the scope of our ability to review until perhaps someone actually demonstrates harm, and then

. I mean sure, SCOTUS might come back later and say whoa, that’s really unconstitutional but how do you unwind time at that point and reverse the damage? You can’t. They won’t. And, in the meantime, this kind of shit will have proliferated through all the red states. It’s jumping from tree to tree to put a fire out with a fire extinguisher as the entire forest rages.

They’ll fly her to New York or California or any other state with sane laws.

Except the Texas ban will allow for Roe v Wade to start falling every where.

I’m sure we’ll see a flurry of new copy cat laws in surrounding states of Gilead.

And if the Democrats lose the House and Senate in the next few years, we’ll see something at the federal level.

I’m sure we’ll see a flurry of new copy cat laws in surrounding states of Gilead.

…until gun-phobic jurisdictions start attempting similar tactics to discourage the acquisition/possession of firearms and ammunition, and pressure is placed on the SCOTUS to reimpose sanity.

Well when John Roberts is the sane one in the group, you’re pretty much fucked.

I can’t wait for the first lawsuit to come under this law where someone files an claim alleging an abortion occurred and names 95 people they’re just pissed about and whose lives they want to make as miserable as possible, and the entire thing is completely false but those 95 have to spend time, money and energy defending themselves in court.

Really can’t wait for some nutjob Texas court (but I repeat myself) to decide in the absence of any evidence to support the plaintiff’s claim, well, the defense didn’t prove it didn’t happen, so it clearly did - plaintiff, we award you a bazillion dollars in damages from each defendant.

Or someone sues the Bed Bath and Beyond check out clerks for selling coat hangers.

For those curious: the text of Senate Bill 8. This appears to be the final version which was passed and signed into law.

Would this be covered under insurance for personal liability?