The last elected incumbent Kansas governor to run and be defeated was Mike Hayden (R) in 1990. Since then, when the incumbent doesn’t run for re-election the seat has flipped parties.

Neither party has held the governor’s seat for longer than 8 years since 1957. 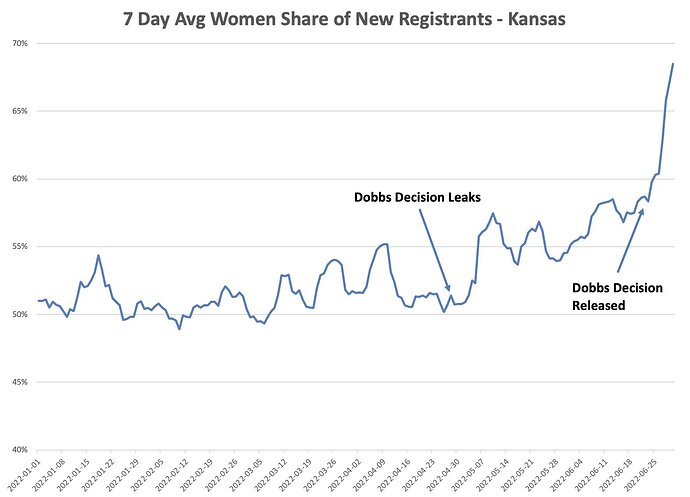 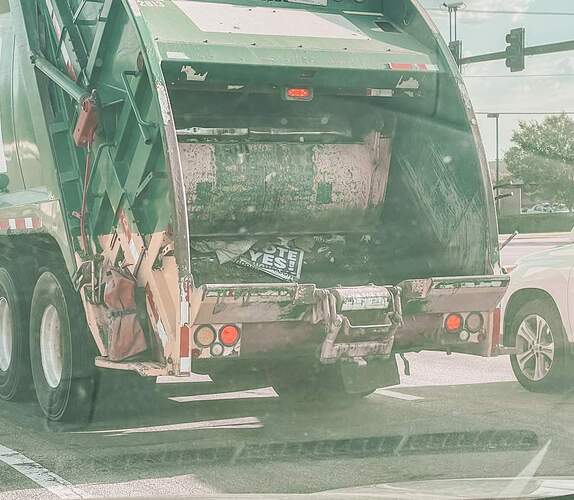 Good stuff. Would be interesting to see the impact in other states / nationwide too.

As I said, the very first thing that popped into my head when I read about the leaked decision was Yamamoto’s alleged “awaken a sleeping giant” quote, and that graph seems to back up my thought/prediction.

The GOP has benefited from talking about abortion for decades. Now that they’re actually doing / trying to do it… it seems like it’s going to backfire spectacularly. Or it at least has that potential.

In a direct vote, “abortion, available or not?”, legal access to abortions is hugely popular. But when it comes to voting for people, and it gets bundled with lots of other stuff, I’m less optimistic. Still, i hope all those new voters in Kansas stick around for the general election.

So this should help the Dems. But the momentum generated is almost certain to be short-lived. Once we settle into a new normal - whatever that is (federal law legalizing abortion everywhere, abortion is illegal in some places but not others, something else) people will again get complacent.

I dunno. If there are a lot of places where abortion is illegal, instead of grainy photos of fetuses in pain we’ll have high quality photos of attractive young women dying. That might provide long-term political fodder.

I also wonder, but can’t find any data… are some/many/most of these new voters young? I did have that thought, that perhaps this would get more young people plugged in, and hopefully at least a chunk of them will continue to vote.

I was wondering because, when the SCOTUS thing got leaked, there was a big protest in my city. Hundreds of people, mostly female, mostly younger.

With the availability of abortifacient pills that can be sent through the mail, the frequency of this happening will be less than in the 60s.

And I think most of the people who would be horrified by such images are already pro-choice. So I’m not sure how much impact it will have.

I think almost everyone is horrified of images of pain and death featuring cute kids and attractive young adults. I think we’re just made that way.

Most of the anti-abortion pics I see are the opposite - trying to show fetuses as close to fully-developed humans as possible. Cute white fetuses, in particular.

Looking at the Roe and the coach praying at midfield, I’m starting to get the feeling the Pope is now an honorary member of the SCOTUS. It pains me to say it, but that’s pretty much the Vatican’s voice. We do have 6 Catholic justices now, a most unprecedented situation.

I’ve watched some of my Catholic relatives struggle through all this Trumpist nonsense. They just have a really, really hard time ignoring the churches stance on abortion, and end up voting GOP. Based solely on that one issue. The desire to adhere to Catholic guidance is very strong.

Jesus never said anything about abortion. He did say a few words about helping the poor.

The pope, and many other religious leaders, have said a lot about it though.

I don’t see the “Jesus was silent on the issue” argument convincing many people.

I don’t either. But they seem to latch onto that one issue and ignore the rest of what Jesus actually did say.

People have been doing stuff like that for a couple millennia now.

Looking at the Roe and the coach praying at midfield, I’m starting to get the feeling the Pope is now an honorary member of the SCOTUS. It pains me to say it, but that’s pretty much the Vatican’s voice. We do have 6 Catholic justices now, a most unprecedented situation.

I’ve watched some of my Catholic relatives struggle through all this Trumpist nonsense. They just have a really, really hard time ignoring the churches stance on abortion, and end up voting GOP. Based solely on that one issue. The desire to adhere to Catholic guidance is very strong.

Aggregate views on abortion are much different between Catholics who regularly attend mass vs. those who do not.

Some of my Catholic family is not affected in the same way. They are Easter/Christmas Catholics.

So I certainly agree. To your point, do you have any insight into which justices are regular attendees at mass? I believe that we could include Biden in that crowd, curiously. I myself have no information on their Sunday routines.

No, I don’t know. But politicians (including the Supreme Court) will of course do things for optics, such as going to mass even if not very religious.

Genesis 9:6
“Whoever sheds the blood of man, by man shall his blood be shed, for God made man in his own image.

Exodus 21:22-25
“When men strive together and hit a pregnant woman, so that her children come out, but there is no harm, the one who hit her shall surely be fined, as the woman’s husband shall impose on him, and he shall pay as the judges determine. But if there is harm, then you shall pay life for life, eye for eye, tooth for tooth, hand for hand, foot for foot, burn for burn, wound for wound, stripe for stripe."

Psalm 139:13
For you formed my inward parts; you knitted me together in my mother’s womb.

Matthew 19:14
But Jesus said, “Let the little children come to me and do not hinder them, for to such belongs the kingdom of heaven.”

I’m pretty sure Matthew 19:14 is out of context but I thought it fitting nonetheless. These are the best verses I could conjur up that a re vaguely related to the abortion topic. As the rest of these are old testament scriptures it isn’t always 100% clear how many of them apply now. I would argue that many laws are still valid, but you can make a case from the book of Acts 10:9-16 that many or all dietary restrictions have passed away.