The economics major in me is very curious about how the economy is going to churn for the next couple of years. 4 years of trade war, 4 years of reduced immigration, a 2 month shutdown of manufacturing, lack of childcare for many workers, and $3-$4 trillion in stimulus has created a very fascinating situation where everyone has cash and wants to buy stuff, but we don’t have enough materials and workers to get it in their hands. Where is this heading?

Meh. “The Economy” goes wherever.

There are enough moving parts that I’m sure someone will be able to fit a convincing explanation to whatever ends up happening.

People blaming the depleted labor force on unemployment benefits while ignoring the impact of lower immigration.

I agree. I think there a lot of the things we’re hearing now are vectors pushing the numbers, but commentary will certainly exaggerate the effect of certain vectors to make political arguments.

Pretty much this. The only people who need to care about the economy are politicians worried about their jobs.

Of course, the Rs will do all they can to dampen any economic recovery for their own political gain.

Of course, the Rs will do all they can to dampen any economic recovery for their own political gain.

I don’t think this is true. They may dampen the recovery through opposition to certain legislation, but I don’t think that is explicitly their intention. They may also block things that would have slowed the recovery down. I actually think it’s a terrible time to do a big infrastructure plan. It puts a lot of job openings into an already crowded labor market.

I actually think it’s the perfect time to pass a carbon tax and a capital gains tax. I’m not sure I would commit to spending all of either of those though. I would use them to start removing cash from the system. That’s my MMT thought anyway.

You literally have a D+ in infrastructure AND tens of trillions of work that has not been done in the last few decades.

This is short-term thinking. Its also exactly why the US is in this mess: lots of “its not a good time” kicked the can down the road so many times it resulted in decaying infrastructure.

It would not surprise me in the least if this was also a secondary goal of the Rs. Easier to privatise said infrastructure once it gets really bad

I’m not saying don’t do anything, it just seems a multi trillion investment when construction materials are 300% of their previous all time highs and construction work is already facing labor shortages is throwing gas onto a fire that is already burning super hot. You’re the genius on all topics American though. You probably know better than me.

My belief in Modern Monetary Theory would also say it is time to reduce the deficit and decrease the money supply a bit when inflation takes hold. We’re going to see if that is the reality by the end of this year.

Thats your problem right there.

The reason for infrastructure now is also because borrowing is so cheap now for the US.

Accepting some inflation (and likely higher wages) now, as a consequence of improving your infrastructure (which then has large positive effects later on (economically)) is a no brainer.

To further stoke inflation while wages only might go up is a bad move IMO. That favors the owners of capital tremendously and will lead to even more inequality. The wages part needs to be guaranteed.

We are seeing wages go up at the bottom.

This is a good thing.

Also, you keep forgetting that CG tax rate is about to go up (a lot). Owners of capital will not get the lions share of the economic boost.

I see significant economic growth in the next few years, as the US becomes the economic engine of the world given we need to spend our way out of the Pandemic (recovery). I see the US starting off in 2021, followed by the EU in 2022.

I expect the US to focus even more on green industries, specially in areas that used to mine coal (this is an extremely important development as it seems the miners are on board now. They now their industry is dying and want to change).

I dunno, the Fed is pretty deadset on lower rates and more monetary stimulus. I think it’ll be very late by the time they start making moves

Every time someone says this the actual receipt increases are far below the projected levels. If Biden’s managers pull off a large CG tax increase it will drastically reduce private investment in the US economy. Rich people/businesses will just keep the money offshore. That drastic a raise will slow down the economy, kill jobs, and hurt working class people.

Case in point: Trump’s managers did the exact opposite with taxes and pre-COVID minority unemployment was at record lows and real wage growth for lower earners was climbing. I’m not a fan of the deficit spending he was doing, but Biden is making that look mild by comparison.

Could this labor market shortage be the thing that finally starts to erode inequity? People have to stretch out and hire non white workers even though they may be more comfortable hiring someone who looks like them. Wages are rising substantially above minimum wage already and companies are starting to pay real deal wages for menial jobs.

One thing is certain the economics of the next decade are going to be extremely interesting to monitor. I personally feel like inflation fears will start to subside over the next few months, but the economy is going to continue on the roll it was on pre-Covid for quite some time.

The unemployment rate went down for 7 consecutive years before Trump took office because we were recovering from a severe recession. If Trump’s tax cuts continued that trend, it was the deficit spending part of the result (the part you don’t like). If the GOP had increased some other tax, or cut federal spending to offset the CG cut, the economy would not have gotten so hyper.

Explain to me how a higher individual CG tax rate causes investments to shift outside the US.

I do think like Trump in one way. I think the Labor Force Participation Rate is more important than the unemployment rate. A healthy economy has a lot of folks who want to participate in it on the productive side. 2016 began the first increase in the labor force participation rate since around 1998. It increased steadily throughout Trump’s presidency until the end. We can certainly debate the cause, but there is correlation. 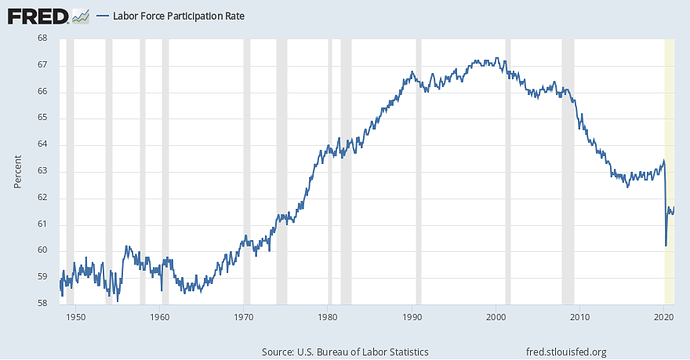 We can certainly debate the cause, but there is correlation.

Here’s an idea. Increased LFPR is a natural effect late in an economic recovery. The first people who get back to work are the most anxious to have jobs. Later, the less anxious get pulled off the sidelines.

It Trump’s tax cuts had anything to do with continuing the recovery, the mechanism was increased federal deficits. The GOP could have created the same deficits by focusing the tax cuts on middle income workers or on productivity enhancing spending, instead of on wealthy individuals. Probably they would have gotten more bang for the buck with that change. And, it would have done more to enhance the lives of ordinary people.