Who will win & who are your cheering for?

Who will win Super Bowl LV?

I am torn on who to root for. I really don’t want Brady to win again, but I do welcome the opportunity to point out that Belichik has been a below average coach without him

I’m a big Mahomes fan. I like the kid (very humble, especially when you look at his body of endorsements).

I’m a through-and-through Bronco’s fan, but will root for a division rival so long as it’s NOT the Raiders (no matter where they’re located).

I don’t want Brady to win for 18,000,000,000,000,…,000,013 reasons. But, if KC won it would give great joy to an ex-boss who was lousy and who would crow all about it to everyone where he’s at, and most people there already generally dislike him. So, it’s like a couple years ago where I obviously didn’t want Brady to win, but I also didn’t want the Rams to win because I didn’t want all the entitled bandwagon LA Rams fans who won’t give a shit about the team in 7 years when they’re having back-to-back 6-10 teams and Kroenke’s new stadium is hosting games with about 45,000 fans, and I was hoping both teams would lose.

So, I guess I’m really hoping for the same here: both teams lose.

I don’t have an NFL allegiance, except maybe a slight residual bias against the Cardinals from being trained to hate Bidwell as a youth. If I have a preference for a particular team it would be because someone I know will be happy if they win. A coworker (surely not Ted’s old boss, because that doesn’t match with this guy at all) will be pleased if KC wins, not aware of any TB fans among my friends and acquaintances. Other than that I typically root for the underdog.

Which leads me to wonder why that is. Perhaps it is a more compelling story if the underdog wins the struggle? Sometimes if a favored team is perceived as being “arrogant” it seems like a win for humility. That’s not to say I don’t admire the struggle a championship team has to put themselves through to succeed, even if they are the favored team.

Join the dark side with me, Steve. We can continue to hate Bill Bidwell, even though he’s dead, for running the Cardinals like a 5th-class franchise for years and finally moving them to Phoenix.

I’m just hoping for entertaining SB. My feelings are much the same as Patience above.

However I was just looking at the greatest that is Tom Brady.
This will be his 10th SB. Only 1 NFL franchise has been to more SBs than Brady, the New England Patriots with 11 who Tom took there 9 times.
If Brady wins it will be his 7th championship which will give him personally more rings than any singe Franchise. He’s currently tied with Pittsburgh and New England who he won all of New England’s trophies as their QB.
Crazy.

So, I guess I’m really hoping for the same here: both teams lose.

I felt that way about Philly-New England a few years back.

well I correctly picked the winner of Super Bowl LV, but I didn’t get the entertaining offensive blowout for which I was hoping. Oh well, MLB starts Spring Training in a few weeks.

Chief’s defense was really underwhelming. Far too many penalties for far too stupid reasons.

It almost looks like Brady paid them all off to make him look good. (FTR, Tom did look good in spite of the help the Chief’s penalties gave his team.)

Chief’s defense was really underwhelming. Far too many penalties for far too stupid reasons.

…and I though TB’s defense was really good. Mahomes was running for his life nearly all night.

It almost looks like Brady paid them all off to make him look good. (FTR, Tom did look good in spite of the help the Chief’s penalties gave his team.)

He did look good. I wonder how he cheated this time.

The officiating in the 1st half was poor. The two PI calls on the last drive of the 1st half were bad and atrocious, respectively. The killer though was the punt that came back on the holding penalty; the punt on the ensuing play only went 29 yards and set up Tampa in great field position. If the Bucs have to start back at their own 30, even scoring on that drive and then tacking on the next Chiefs drive (they went 5 net yards in the 59 seconds after the 2-minute warning) makes it 14-6 at the half. That’s a workable position, one you don’t come out for the 2nd half thinking “we have to score on this opening drive.”

That said, the Chiefs OL was brutal. It looked like they just wanted to get the game over with so they could get to the after-party. OK, yes, they had injuries. That didn’t excuse guys regularly going through the line untouched, guys blowing past linemen with a direct line on Mahomes. Andy Reid was Andy Reid in a big game again. Way too many pass plays, token attention to the running game, poor adjustments during halftime.

You want last night in a single graph? 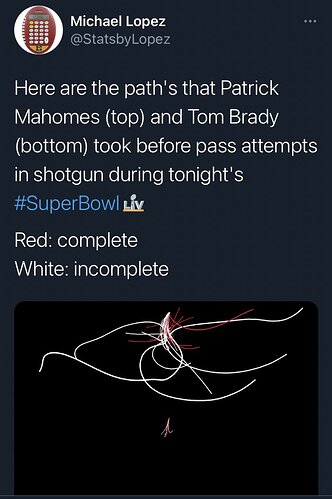 The officiating in the 1st half was poor.

I noticed I think in the second half a play where someone caught the ball after it bounced off the other players hand without apparently touching the turf but the ref called it incomplete, the guy who thought it intercepted it was obviously pissed. But me, as an infrequent NFL watcher, was like hang on… wasn’t that the wrong call?

That said, the Chiefs OL was brutal.

I noticed this especially in the fourth quarter you couldn’t count to 1 before the OL broke. There was one great play where the OL disintegrated, Mahomes does a throw while being tackled and nailed the dude in the face, who failed to catch it

Agreed.
Tom Brady didn’t win this game; the Chiefs OL (what little there was of it) lost it.
I mean, think about it: The KC Offense should score 30 points on anyone. But they didn’t yesterday. Tom Brady did nothing to prevent the KC Offense from scoring.
(Well, except to waste time handing off with a big lead instead of passing incompletes and interceptions; he learned from the Falcons not to do that.)

Tom Brady contributed substantially to winning the game. 31 points, no turnovers. He took a couple shots down field when they running and success prior time and in playoffs kept Chiefs back.

Not just me saying it. 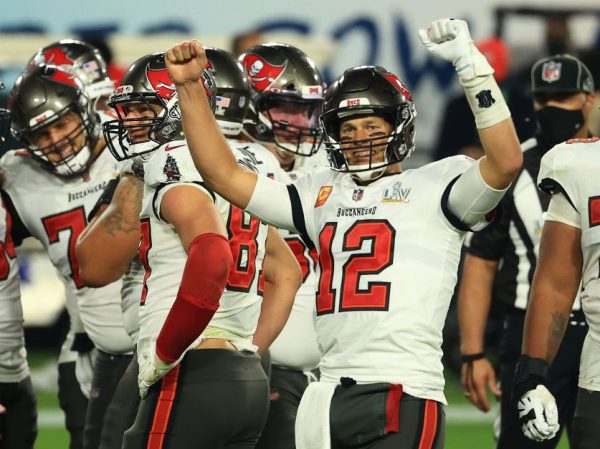 Yes, Tom Brady Is The GOAT. But He Didn’t Do It Alone.

Can’t help someone appreciate rather than spend time on try to diminish. It’s like explaining what the shape is in those pictures from the 90’s and then just yelling louder like that helps them see. Changed teams, no all pros on offense, put up 31 with no TO playing against a team that spent $30M more on players outside the QB. 7th time in 10 trips when second closest QB is 5. 4 other trips to title games. Team sport GOATs always get help, but they are GOATs since they work harder, and inspire confidence and effort in others beyond what they would normally achieve.