Stay Out Of Politics

Mitch telling corporate America to “Stay out of politics” over their recent condemnation of GA voting laws. What do you think when you hear someone say this type of thing? It’s often levied against athletes, musicians, etc when they make social justice messages as well. Isn’t politics democracy in America? Doesn’t politics belong to all of us? 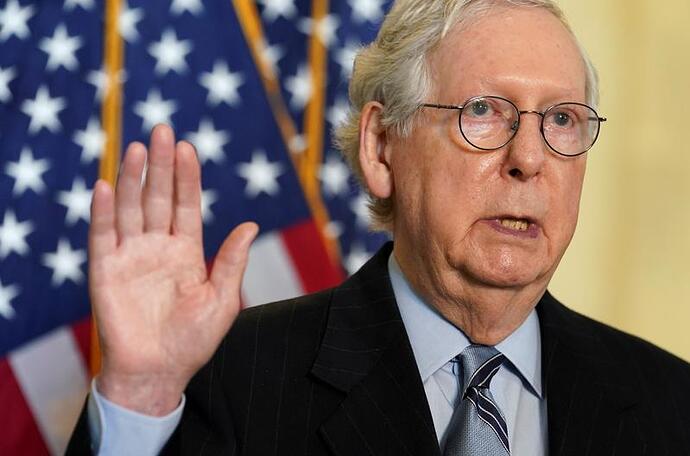 U.S. Senate Republican Leader Mitch McConnell lashed out at corporate America on Monday, warning CEOs to stay out of the debate over a new voting law in Georgia that has been criticized as restricting votes among minorities and the poor.

A contradiction if one agreed with the Citizens United ruling, IIRC.

On the flip side, persons who argue keep big money out of politics should agree.

Friedmanites might object unless they view it as a cynical PR exercise.

Edited - originally responded from phone, only looked at post, not link, and thought it was the other Mitch (Romney).

Wait, the de-facto head of the Republican party is now saying that he’ll use big government to interfere with companies and private individuals that don’t toe the line? And they’re going to stifle the freedom of speech and free enterprise? I am shocked.

the other Mitch (Romney).

But it might make more sense for comments about baseball to come from a guy called “Mitt.”

What do you think when you hear someone say this type of thing?

I think they should just talk about poop instead and we’d be a lot happier.

I love talking about poop.

There’s another thread all about it. Come on and join the party.

I am disappointed in Mitch. I took him for a shrewder negotiator.

Corporation tax rates were lowered a couple years ago. Corps got what they wanted. I don’t see why they want to amend the old agreement ( we, the corps, offer nothing)

Not only that, but a government official is threatening entities (corporations this time) to stop speaking.
I mean, sure, if FoxNews a-holes do it, that’s one thing.

I read that this morning and thought I had probably not seen a more hypocritical thought in all my life.

IDK, Mitch himself probably has a lot of competition for that title. But to be fair there might be quite a few politician on both sides of the aisle in the running. Though lately since like 2016 at least the Republicans seem to be staking a bigger claim than the Democrats in general.

I read that this morning and thought I had probably not seen a more hypocritical thought in all my life.

Possibly the Republican Congress critters that went back home and touted things going on in their communities due to the stimulus legislation that they all voted against?

And you can bet the same ones that vote against infrastructure will be bragging about all the jobs they helped create!

I’m looking forward to the Rs turning down
campaign contributions, and
PAC support, and
dinners with lobbyists
from Corporate America.

To give him more credit, I think what he has in mind is corporations acting in quasi governmental roles. The sin in that case would be usurping government’s role rather than behaving as a political actor.

And really the same argument made by socialists against corporations. But in that case the corporations are usurping the government’s role with respect to their employees.

I’m not sure what you mean by this. How are corporations acting (or threatening to act) in quasi-governmental ways?

And would you also consider it quasi-governmental if a corporation said, “reduce corporate taxes or we will build our plant elsewhere”?

By exerting the kind of power that would normally be reserved for government.

An easy example is “de-platforming” by twitter. That looks a lot like censorship. Historically only governments have been able to exert that kind of power. And it is a power specifically limited by our constitution. So it begins to look like corporations are beginning to infringe on our rights in a way that government normally would, and is specifically prevented from.

Similarly, corporations can exert so much control over workers lives by requiring long hours that the workers become almost like serfs or subjects. This is specifically what a constitutional government is supposed to prevent. So government must step in and protect people freedom from corporations, or so say socialists, or to some degree anybody who believes in the modern welfare state.

If you are a republican, then in this case it probably feels like these corporations are scolding Georgia in a way that the federal government normally would. The proper thing is for corporations to lobby for governmental action (by spending lots and lots of money.)