Somebody explain me evaporated milk

What I am not getting here is that inside these cans of evaporated milk is some kind of liquid substance. If it were evaporated wouldn’t it be a gas, like milk vapor?

It’s partially evaporated. Like half the water is taken out. Call it milk sludge.

Then you’ve got sweetened condensed where they throw in a couple pounds of sugar too.

I’ve seen it in powder form as well, useful for long term storage.

so if u add some water, does it become just like ordinary milk?

Are you taking issue with the name? Or not understanding what it actually is?

As for the name… yeah, it’s describing the process rather than what remains after the process. Perhaps it’s not an ideal name, but what would you call it instead?

so if u add some water, does it become just like ordinary milk?

Sort of. Fresh milk tastes… fresher. Reconstituted evaporated milk is safe to drink but not as good.

But you can certainly use it in cooking the same as regular milk after mixing it 50/50 with water.

I use evaporated milk straight out of the can in several recipes without adding in the water. It’s useful in sauces where you don’t want all that extra liquid.

When I was a kid and we had fresh peaches we would eat them with evaporated milk and a sprinkle of sugar.

No idea why my mom used evaporated milk for that instead of regular milk (or cream), but it was pretty good.

I mentioned we would skim the top part of the cream off the milk. We put it in the gallon Miracle Whip jars. The cream would go down below where the jar became vertical. We would skim to just above where the glass started to narrow leaving maybe 1/2 to an inch of obviously different colored liquid at the top. We would put the cream into wide mouth quart jars and put them in the fridge until we decided to make butter. We didn’t put lids on the cream jars so the top cream would dry out and become almost a leathery substance.

When we had any kind of fruit pie, my dad would go get one of the jars of cream and pull off that top leathery part off and put it on top of his pie. He also sometimes used the cream below to put on his cereal for breakfast. First time I saw someone put cheese on their apple pie I thought it was totally disgusting, but then thought about what my dad did, which I did find totally disgusting at the time.

Sometimes when the cow dried up, mom would use dry milk or evaporated milk to mix with the whole milk she would buy from the store to extend it because we were poor. It was always more disgusting and always extended the milk much longer because we wouldn’t drink it straight only on our cereal and even then often went for other things than cereal for breakfast. 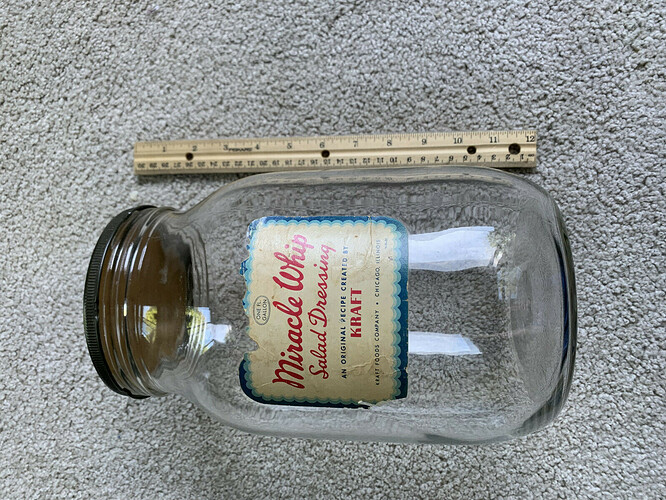 Once might also take into consideration that “evaporated milk” is a canned product; so it has a long shelf life. And in the days where refrigeration was actually a literal “ice box” . . . this became a key part of one’s pantry (since it didn’t require to be kept cool).

As refrigeration technology developed and scaled to be accessible to more and more people, “the way it was done” didn’t necessarily change.

I buy evaporated milk for use in recipes (pumpkin pie, fudge, mac & cheese if I’m not using cream) but I also bought some for my Covid stash last year. When I used up my Covid stash I had too much canned milk so I donated it to a food bank.

Now I am re-establishing a quarantine stash but I forgot about canned milk. I think I will buy a couple cans this weekend.

what would you call it instead?

Maybe they should call it evaporatedish milk?

You need to watch the Burns and Allen Show just for the Carnation commercials.