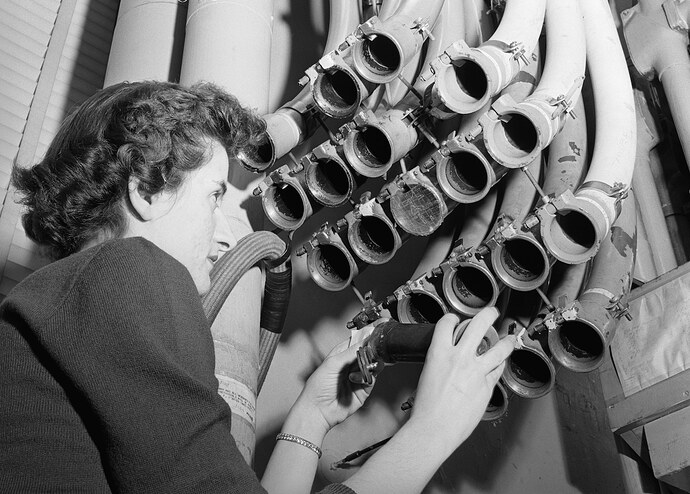 Despite spending at least $250 million to modernize its system, Social Security still relies on 45-year-old job titles to deny thousands of disability claims.

Every year, thousands of claimants like Heard find themselves blocked at this crucial last step in the arduous process of applying for disability benefits, thanks to labor market data that was last updated 45 years ago.

The jobs are spelled out in an exhaustive publication known as the Dictionary of Occupational Titles. The vast majority of the 12,700 entries were last updated in 1977. The Department of Labor, which originally compiled the index, abandoned it 31 years ago in a sign of the economy’s shift from blue-collar manufacturing to information and services.

Social Security, though, still relies on it at the final stage when a claim is reviewed. The government, using strict vocational rules, assesses someone’s capacity to work and if jobs exist “in significant numbers” that they could still do. The dictionary remains the backbone of a $200 billion disability system that provides benefits to 15 million people.

It lists 137 unskilled, sedentary jobs — jobs that most closely match the skills and limitations of those who apply for disability benefits. But in reality, most of these occupations were offshored, outsourced, and shifted to skilled work decades ago. Many have disappeared altogether.

Since the 1990s, Social Security officials have deliberated over how to revise the list of occupations to reflect jobs that actually exist in the modern economy, according to audits and interviews. For the last 14 years, the agency has promised courts, claimants, government watchdogs and Congress that a new, state-of-the-art system representing the characteristics of modern work would soon be available to improve the quality of its 2 million disability decisions per year.

But after spending at least $250 million since 2012 to build a directory of 21st century jobs, an internal fact sheet shows, Social Security is not using it, leaving antiquated vocational rules in place to determine whether disabled claimants win or lose. Social Security has estimated that the project’s initial cost will reach about $300 million, audits show. 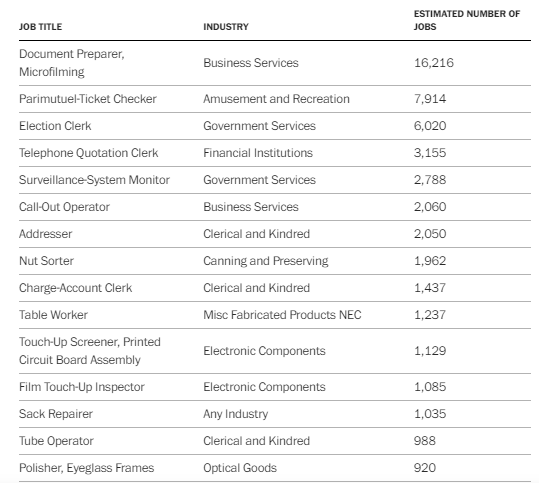 My spouse was denied SSDI for their disability, but I don’t remember why exactly. I wasn’t allowed to be in the courtroom which I thought was unreasonable considering I’m the primary caregiver, but I’m sure the SSA had “reasons”. My spouse went all the way through the process, repeated denials and appeals, and then denied for the last time at the final stage by the administrative judge, and I’m pretty sure in my memory that it was due to the vocational person saying they could do some things, but I don’t know what the “some things” were.

I’m glad that the LTD insurance policy my spouse purchased through their workplace defines any other occupation as something that would pay them at least 80% of what they made before their disability. The 5-10 hours they could possibly work in a week won’t get them there. Not to say that there aren’t jobs out there that they could make that much at with that low of hours, but my spouse is not qualified for them.

Instead we send every after-visit note from every doctor/specialist visit as soon as they’re available, and fill out the same yearly questionnaire asking which ADLs they can perform, with a scale of 1-3 being can perform always without assistance, can perform but need assistance sometimes, cannot perform without assistance, what their “before activities” were and what their “current activities” are, describe a “normal” day, and provide a list of all doctors/specialists and when the last and next visit is for each of them.

I don’t know what would have been required for SSA if they had been approved for SSDI, maybe the same, but I still think it would have been good for them to have Medicare sooner, with my health insurance as secondary. Maybe not. They still have several years to go before they reach Medicare age, so I have several years minus a couple to put off learning how to navigate that system.

Yes, the SSDI process is miserable for people who are legitimately disabled, while also allowing a relatively high amount of fraud. Disability insurers make much better decisions, although even they get it wrong sometimes.

I occasionally sat in on legal sessions where they’d discuss resisted claims (I’d help value the claims because typically once we wrongly or “wrongly” deny a claim we have to settle because we can’t be trusted to keep the person on claim). I recall in one case the trial lawyer was pointing out what a weak case we had / how wrong our claim denial was by saying “look, even Social Security approved her claim.”

(Note, I have no doubt that the overwhelming majority of claim decisions by my then-employer were reasonable… I just only got involved in the tiny fraction that were not.)

I was denied disability insurance coverage back around 2000. Why? Because I worked from home. Apparently they couldn’t tell if I was working or not. Funny, my spouse says the same thing.

In the end we kind of pushed that I was out of the house about one day a week and that was sufficient to get coverage.

I’ve seen a few other outdated mechanisms.in the insurance industry related to occupations. An underwriter suggested that sometimes the reinsurers were just out of date because there wasn’t enough money to make it worthwhile updating.

Related, one of the coolest things about my antique insurance books are the list of occupations from 100+years ago. Some of them are hilarious.

On the other end of the spectrum, a Canadian life company offered disability at standard rates with no underwriting to insurance advisors who made enough money. I called to confirm that my smokinh cigarillos when I go hunting didn’t change their nonsmoking rates being offered. Nope,non smoking premiums for me.
I took the max allowed under the plan lol.

Anyway, sorry for posting in your thread.

I worked from home. Apparently they couldn’t tell if I was working or not.

That’s dumb. If your employer (or clients, if self-employed) think you’re working enough to pay you then for disability purposes, you are working.

SS doesn’t have the staff to reassess annualky, it’s more like every 7 years, but they do it even if you have something there’s no recovering from. My sister didn’t get a questionnaire in the mail and they just stopped her check. Took her into the office(a major undertaking), filled out the forms, and it was still a couple of months before they resumed payment.

My brother briefly dated a SS claims person. She told him the most fraud was believed to be in the psych claims, because they can’t really be disproved.

SS doesn’t have the staff to reassess annualky, it’s more like every 7 years, but they do it even if you have something there’s no recovering from.

My wife was disabled in a car accident almost 21 years ago (TBI + a few additional physical issues that wouldn’t qualify on their own).

She finally got SSDI 5 or 6 years after the accident – getting through the process took forever, aggravated by the system being overloaded / delays before getting in front of an ALJ with a lawyer.

She’s been up for review three times.

The first time, the state DDS (agency doing grunt work for SS) requested medical records, and recommended denial. I drew inspiration from the work of the disability attorney who got us through the ALJ process of her application, and wrote an appeal letter linking her diagnoses, etc. to the specific criteria in the Blue Book to document eligibility…and the appeal was accepted.

The second and third times, we just got the letter saying that she was subject to periodic review, but they weren’t going to review her case this time around.

If they ever update the list of jobs one can potentially do in state to reflect the potential for hybrid/remote work…a disability review could be rather “interesting”. Given the speed of federal bureaucracy, I doubt that will happen before my wife gets old enough for them to be less interested in her.