Too many people were celebrating her 100th birthday before it happened 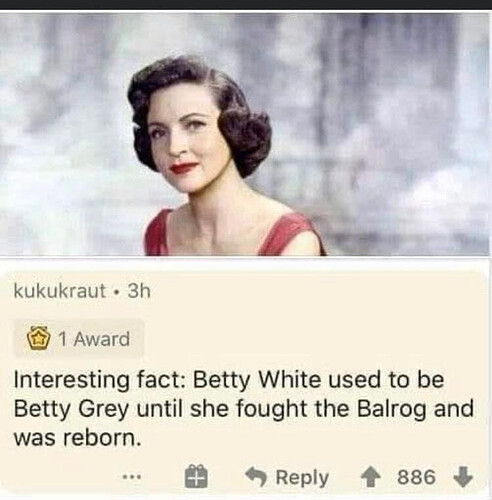 I highly recommend watching Betty White’s old TV show “Life with Elizabeth”, so you can see her from 70 years ago. I thought it’s pretty cute & funny.

Revisit this fun-loving series as Elizabeth and Alvin face myriad predicaments, with laughter to spare. Betty White stars as Elizabeth, newlywed wife of Alvin, played by Del Moore. The skits, or

I was coincidentally watching the Golden Girls last night for the first time in years. 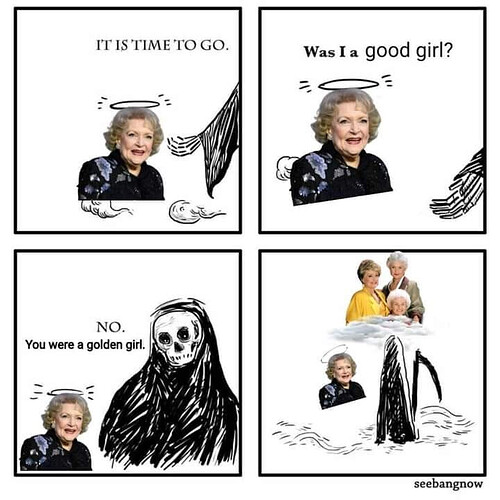 In this interview from a few weeks ago - “I’m so lucky to be in such good health and feel so good at this age,” says the veteran actress. “It’s amazing.”

She also posted about her 100th birthday on instagram like 3 days ago. This must have been sudden.

It’s a shock, but I’m glad that she felt good right up to the end.

I loved both The Golden Girls and Hot In Cleveland, but less familiar with her earlier work.

Loved her in The Mary Tyler Moore Show (my first exposure of her).

She was always a hoot when she was on Hollywood Squares as well.

Loved her work in Golden Girls (one of the reasons I’d watch that program at all).

She was a smart and witty celebrity contestant on numerous game shows.

I have to admit, I watched my share of the Golden Girls

I read they are going ahead with the planned 100th birthday celebration.

Loved her in The Proposal.

The video below might not be the most SFW clip.

And the Funny or Die video they made.

Loved her in The Proposal.

We just watched that movie a couple of days ago!

I might have to re-watch that movie. I never did watch Hot In Cleveland all the way to the end, and it’s hard to find (or was last time I checked).

I thought it was really funny though, and a great cast. (Betty White, Valerie Bertinelli, Jane Leeves, and Wendie Malick). Susan Lucci made multiple guest appearances as herself.

Hopefully someone will be inspired to put the show on their streaming platform now or at least release the DVDs for a reasonable price.

Googling it says it is available on Paramount+.

And Amazon makes it look like it is available from them “with a Paramount+ subscription.”

It also says you can get a free month on Paramount+ or through Amazon it looks like you can get the first 2 months a 0.99/mth.

Hmmm, that’s the one streaming service we don’t pay for. Might have to consider a month when I won’t have a lot going on to try the free preview. Not sure I can get 5 seasons watched in a month, but maybe in 3 months I could.

But Cobra Kai and Boba Fett are both out, so not this month

Do you people understand what this means? Misogyny has a purpose sometimes. Without it, only the woodland creatures and a select few random campers would have been able to enjoy what a great person she was.

Betty White was one of the funniest people in showbiz IMO. She always used clean language and any vulgarity was only hinted at. That is good comedy. Glad she lived a nice long life. 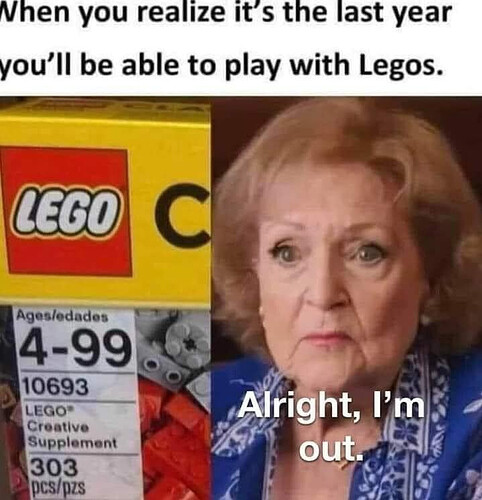