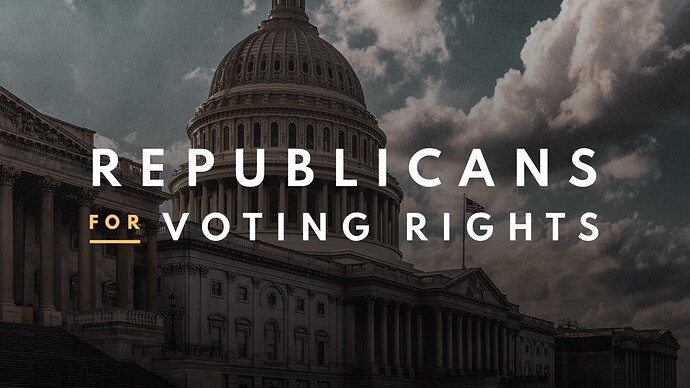 Republicans: Now is a time for choosing.

Republicans for Voting Rights is an initiative of the Republican Accountability Project with the purpose of defending the accessibility, integrity, and competitiveness of American elections.

Voting is a sacred American right. But after the 2020 election, some Republicans began pushing for more restrictive voting laws designed to support unfounded accusations that the election was stolen and the results were illegitimate. Some even believe that voting is harmful to their electoral prospects. More still believe our electoral system is rife with fraud and security failures.

Republicans for Voting Rights rejects the false choice between voting access and election integrity. We believe that Republicans in federal, state, and local government should protect the right to vote, protect our election systems from partisan or foreign interference, and help build trust in our democracy.

If January 6th isn’t your line in the sand, what is?

At the time mainstream Republicans were hoping that the events would lead to the end of Trumpism in the party. They miscalculated the degree to which Trump controls the base of the party. This new group isn’t going to change anyone’s mind as even those Republicans who would like to see Trump gone, see no benefit in facilitating access to voting.

The Trump base is what it is. They will never be large enough to seize control of the country on their own. The Trump base needs a complicit, complacent Republican party to run interference, to provide cover for them. So far the GOP is doing just that both the elected officials and the voting public. My concern is with the voting public, where do they make the break with the party? This group gives me at bit of hope that there is some self reflection within the party.