One year into Biden and it looks like we’re headed for a Republican whitewashing in 2022.

The inability to message as a party on anything except social justice, the inability to pass legislation, and vaccine mandates are going to put Trump back in the White House.

McAuliffe wasn’t a great candidate from what I can tell.

Did Youngkin have a message beyond banning CRT in schools?

The one thing is clear, Republicans are going to double down on their school board strategy over the next 12 months. The made up CRT bogeyman is just the tip of the iceberg. There will be all sorts of absurd claims about what democrats want to teach kids in their liberal agenda. I doubt we are far off from Biden wanting to make kids cry over the guilt of burning fossils fuels, because why not?

So how do the democrats effectively respond?

I agree about '22, but hopefully things will swing again in time for 2024…

In particular, if the Rs win the House in 2022, we’ll have committees investigating all sorts of D activities but ignoring 1/6 (for example). Biden will be a “do nothing” president because he won’t get any legislation through congress. At the same time he will be an “autocrat” because he resorts to executive orders.

The Ds don’t have any answer for the culture wars because the Rs can pin the most extreme opinions on every D.

Would the inability to pass legislation still be on Biden if the senate had an R majority?

Youngkin received Trump’s endorsement, but did not embrace Trump nor have a “Trump rally”. (I believe the same thing happened in the NJ with Ciattarelli). It’s true that Trump remains a factor, but he will not be put back into the White House in 2024. Many of his policies remain popular, but his style and mean tweets turn off too many people. There are plenty of lessons from these elections - most noticeably, the Proggies have been put on notice.

Absolutely. R’s will stop all legislation, blame Biden, and their constituents will eat it up.

How much of that was turnout though?

Low turnout elections benefit the Republicans because they are better at turnout than the Democrats.

A lot of Dems only care about the Presidential election and maybe a tiny handful of very high profile others… which I would say the VA governor’s race was not, AFAICT.

So I don’t think it follows that VA electing a GOP governor means that Trump sails to re-election in 2024.

I got a piece of mail recently decrying how awful a local Republican was because he said he disagreed with Trump on just about everything. Mail was from a primary challenger. But it had the opposite effect of what was intended as it makes me want to vote for that anti-Trump Republican in this spring’s primary!

school board strategy over the next 12 months.

Not just CRT boogeyman. All four of the incumbent school board members, backed by teachers and who won easily last election, got voted out. By 30%. The only issue differing the new ones from the old ones- new ones were against mask mandates and for keeping kids in the class room.

Democrats have underestimated just how much everyone hates Covid restrictions. Blue state here too.

Teacher’s union here endorsed a triad of pro-mask school board candidates: one Democrat, one Republican, one independent. We voted for 3.

GOP endorsed two other candidates. Both die-hard anti-maskers, and at least one campaigned on anti-CRT. GOP did not endorse the pro-mask Republican candidate.

The teacher’s union endorsed / pro-mask candidates all won. (Which of course means that the anti-mask, anti-CRT candidates lost.) Meanwhile the pro-Trump Republican city councilman up for re-election also won.

Which means some Republicans voted for a pro-mask Democrat for school board and a pro-Trump Republican for city councilman.

Reading the above this seams to be a RIP thread. Have any of you guys considered the possibility that the D party has moved too far left for a country that is moderate?

Remember a few years ago when statues first started being taken down and people were warning that the protesters would end up going after founding fathers? Most of the libs here said it would never happen. NYC government is going to remove a statue of Jefferson. People protested against a statue of Lincoln that was approved by and paid for by freed slaves because it showed a white man in a superior position to a black man.

The D-party has let the whackjob progressive wing take take over. I crossed party lines in the past several times. I can’t do it now because I don’t want Bernie Sanders desciples running any committees.

Why should I care about statues of the founding fathers? Take them down or leave them up, whatever. Doesnt affect my life.

People who get uppity about this are weird

This was the one thing that give me hope of a return to normal - that he won mostly ignoring Trump.

Interesting how you start off with a claim that the D’s are too far to the left, then back up your argument with a culture war issue. Where is the policy discussion?

Reading the above this seams to be a RIP thread. Have any of you guys considered the possibility that the D party has moved too far left for a country that is moderate?

Remember a few years ago when statues first started being taken down and people were warning that the protesters would end up going after founding fathers? Most of the libs here said it would never happen. NYC government is going to remove a statue of Jefferson. People protested against a statue of Lincoln that was approved by and paid for by freed slaves because it showed a white man in a superior position to a black man.

The D-party has let the whackjob progressive wing take take over. I crossed party lines in the past several times. I can’t do it now because I don’t want Bernie Sanders disciples running any committees.

I agree the left is moving left. I wonder if it is a strategic move, as a response to the right going crazy.

In more concrete terms–
In a world that’s gone to hell, with Donald Trump spitting shit on everything and Republicans becoming honest-to-God deranged (see chart below) – I personally can’t bring myself to care about radical teens breaking statues (or, for a policy example, support for free college).

But BECAUSE I don’t care about leftism, it means that democrats have less to lose by embracing them. Therefore, I think Democrats might start embracing radicalism as a matter of strategy.

…Anyway… that’s all just a thought. Another thought is that the internet is flat out making everybody crazy, and we’re in for a wild ride. 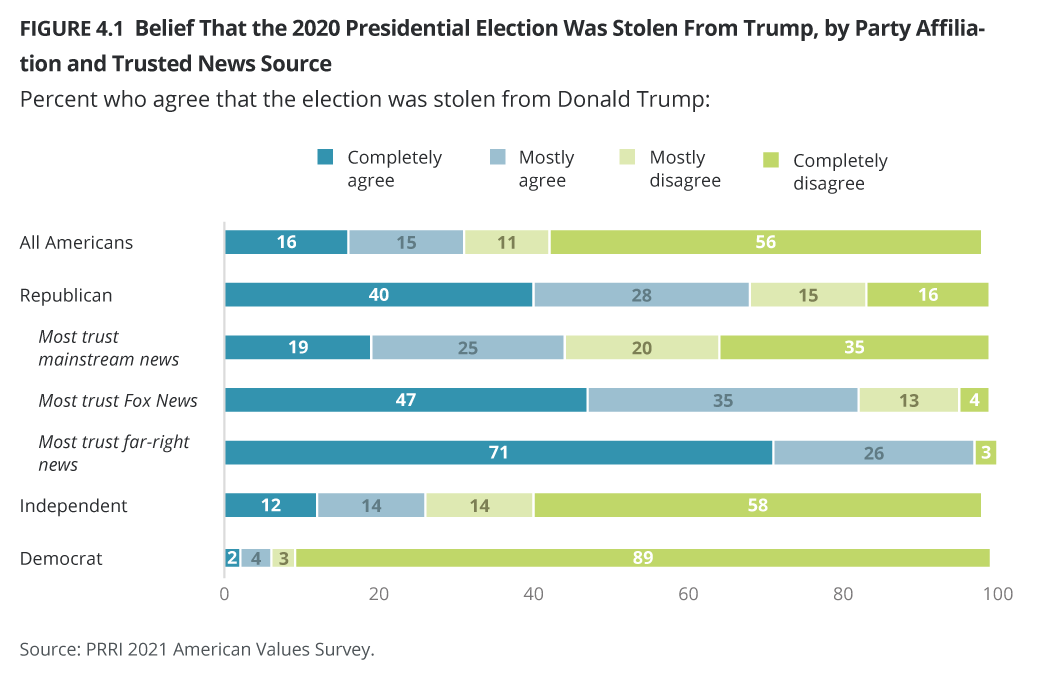 This is my favorite school board election story from yesterday (so far):

If Democrats don’t save things in '22, they won’t have to worry about '24 because all the levers will be in place to deny them a return to power.

At least then, Democrats could counter-message by pointing to McConnell’s obstruction in the Senate. And, they’d be correct about it and could hammer away at it with repeated messaging saying McConnell and his fellow Republicans in the Senate continue to deny Americans beneifts that other modern nations have and people with the attention span of a 4-year old would put 2 and 2 together and say “yeah, Republicans are in the majority, not blaming Biden for inaction.”

Right now? The Democrats have no message, except to point fingers at each other which Republicans will run endlessly and say see, Democrats can’t do anything when they hold power, they can’t even work together, put us back in charge and we’ll move this country forward.

I think it depends on how you want to view the party.

Republicans as a whole have gone way off to the right, to the point that anyone who was a middle-of-the-lane Republican is a leftist Democrat to the rest of the party. There’s no far-right faction of the party, that is the party. Those with a conscience who say I cannot support this have almost exclusively been driven out or forced to fall in line. You could accurately label the entire party as a bunch of extremists with extremist views at this point, and then go down the list of extremist views and get people to say yep, that’s extreme for me.

Democrats? The hard-left side of the party is IMO still the minority, but it’s using its weight to try and call the shots. Their “no compromise until we get everything we want” positioning is much more effective since the party has such a slim margin in the House and no margin (outside Harris breaking ties) in the Senate. What they fail to realize is that their tactics are backfiring on the party as a whole. (See: Virginia, November 2021 elections.) They’re playing for short-term gain, as if they’ll never get another chance at what they want. In the process, they’re guaranteeing they’ll never get another chance at what they want.

Pulling down statues of Confederate leaders? Probably reasonable, you could pass that off on the moderate part of America. Pulling down statues of Jefferson, Washington, Lincoln, etc.? Moving a 2-billion year old rock because 90 years ago someone gave it a derogatory name? That’s the kind of asinine shit that chases moderates away.

Bottom line: Democrats still suck at messaging. Getting nothing accomplished in the first 10 months of Congress is devastating. They need to start piece-mealing legislation and running individual bills through, show a long and steady record of getting stuff done. If Republicans want to obstruct in the Senate, then you can say look, we’ve got eleventy hundred bills waiting to get passed and the evil Mitch McConnell continues to obstruct the will of the voters, vote for us so we can move America’s agenda forward - don’t be held hostage by Mitch for another 2 years.