The Critical Race Theory thread sparked a completely unrelated discussion of religious topics. I think that discussion is interesting, but it is confusing to have it interwoven with CRT, and really has nothing to do with it. So I’ve created this thread and moving all those posts here.

An interesting story that probably falls under the “popular” definition of crt at least: 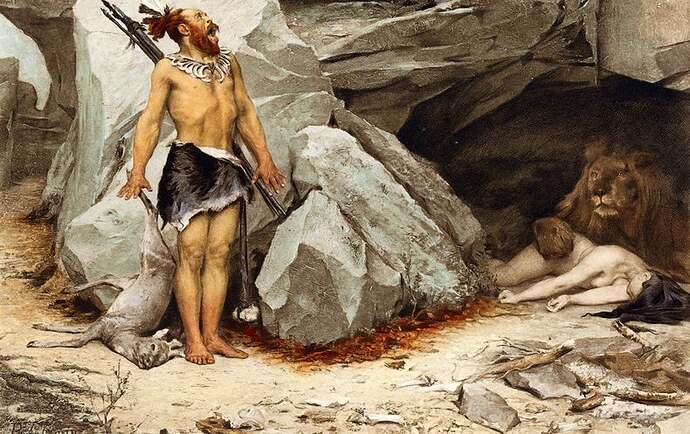 Denial of Evolution Is a Form of White Supremacy

As museums reopen let’s introduce ourselves, and our children, to the original Black ancestors of all human beings

In my opinion it shows what i would guess is both the power and temptation behind systematic racism as an analytical tool.

It points out that creationism makes it easier to create a history where God creates a white Adam and Eve, bypassing the actual natural history in which we all descend from africans, who presumably had to invent human culture.

An interesting follow up would be to look for data on whether creationism actually supports racism, or vice versa.

But the article doesn’t stop there. It claims to “unmask the lie that evolution denial is about religion and recognize that at its core, it is a form of white supremacy that perpetuates segregation and violence against Black bodies.”

The evidence in the article, at least, does not seem to support this. And while I find it perhaps more believable that racism is a force, even a critical force, that powers creationism, the claim it is about racism INSTEAD OF religion seems not true.

It points out that creationism makes it easier to create a history where God creates a white Adam and Eve, bypassing the actual natural history in which we all descend from africans

Eh, even if one take Genesis literally, as in God created the world in 6 24-hour days on August 28, 4004 BC (or whichever date the Creation Museum came up with… I might be remembering wrong) you still have the concept that we all descended from Adam & Eve: blacks, whites, Asians, Hispanics, First Nations… all descendants of Adam and Eve.

I think most literal creationists would say that the three sons of Noah married women of different races, which is where the different races come from.

But Noah’s three daughters-in-law came from somewhere… ultimately they, too, are descended from Adam and Eve.

Certainly there’s no denying that most western art depicts Adam and Eve (and Jesus and Mary and Joseph and Elizabeth and the angels, and more) as being white. But even if we accept that they were… non-white people exist and are human just the same as white people. So there’s really no getting around the fact that we’re all descended from Adam, and more specifically, from Noah.

I think the claim would be that this allows whiteness to be built into the creation myth, literally.

You can certainly imagine that Adam and Eve were black, and that would not be unbiblical as far as i know. If these representations were widespread then i think it would significantly weaken the claim.

But as you point out, they are usually depicted as white in western arts which i think strengthens the claim.

If memory serves, there is an obviously racist history where white germanic people literally bring civilization to every part of the world. Under this false history, the pharaohs of egypt are all white for example.

I think the argument is that creationism allows a diluted version of that history.

The article’s claim would be greatly strengthened by evidence of creationists complaining that we cannot all be descended from black africans. instead they all seem to complain we cannot descend from apes. but maybe i have only heard the complaints about apes.

The evidence in the article, at least, does not seem to support this.

I agree. There is no “unmasking” in the article. Certainly, those people who treat the Bible as literally true in all respects deny evolution. They do this for religious reasons – they want to believe they have a personal relationship with a loving God. Yes, there are secondary effects, and assuming that black people must have descended from someone who looked like Hebrews is one of them.

But, that’s not the point of promoting creationism.

assuming that black people must have descended from someone who looked like Hebrews is one of them.

I don’t even think that’s really implied. Noah had three sons, and one (Ham) sired all the African nations, and the Canaanites, another (Shem) sired all the Semitic peoples, and the third (Japheth) sired the Europeans and (I think) the Iranians. And none of them sired the East Asians. But we have no idea what Noah looked like or what “race” we might assign him to.

Of course, the “African” people who descended from Ham were mostly north-Africans – Egyptians and such, and maybe the southern Africans are as left-out as the East Asians.

Those areas and peoples probably “didn’t exist” at the time of the writing. And it’s difficult for a Book that is supposed to be infallible to correct itself, to add a fourth or fifth son of Noah.

Well to be fair, women were often omitted from Bible stories. Maybe Noah saved some daughters too? Certainly traditionally I have always been taught that there were 8 people on the ark: Noah, his 3 sons, and all their wives. But I don’t think we can rule out the possibility of Noah having daughters.

You’re right about the actual Bible text. It doesn’t give skin colors for anyone. Bible literalists believe that all the genetic variation we see today comes from Noah, his wife, and their three daughters-in-law. Noah might have had much darker skin that one or more of his daughters-in-law.

I was thinking about the pictures I remember from Sunday School. Adam and Eve were always fair skinned. Other biblical figures were drawn with very dark hair and skin that might be a shade darker than northern Europeans. (some teacher pointed out that the popular painting by Sallman didn’t look Jewish).

I assume some people believe that the dark genes were introduced by a miracle as a result of “God’s curse on Ham” (even though the text is Noah cursing Canaan). I don’t recall anyone at my church saying that.

I’m thinking about the tradition I was raised in. It emphasized the six day creation and the great flood as part of a commitment to Biblical inerrancy. Any racial content was an unintended side effect. They were much more invested in arguing with Catholics about the pope than worrying about how some people got dark skin.

In my parent’s church, you would have had to deal with 1 Peter 3:20

" In it only a few people, eight in all, were saved through water, " The eight seems to include the four wives. I don’t know what Greek words were translated as “in all”.

They were much more invested in arguing with Catholics about the pope than worrying about how some people got dark skin.

Heh, I suppose you could describe my church experience this way too. How we came to gave different races? Meh, who cares? But the infallibility of the Pope? NO, NO WAY, NO HOW, ABSOLUTELY POSITIVELY NOT!!! The Pope is just a nice guy who the Catholics happened to appoint bishop of Rome, no more special than any other bishop except people seem to pay extra close attention to what he says.

The question would be how, exactly, did Paul come to know how many people there were?

why did this turn into bible study group

Peter, not Paul. Oral tradition I presume. Also I agree with John. Also the Bible is mostly not a history book.

Also the Bible is mostly not a history book.

Speaking as a Jew, I’m going to say it mostly IS a history book. You may be uninterested in a lot of that history (which exotic woods were used in the construction of the holy Temple? What were Aaron’s sons wearing at various times?) but I see most of it as history. I’ll grant that the NT is mostly not history.

why did this turn into bible study group

Well, I know a lot about the Bible, and nearly nothing about Critical Race Theory, so there’s that…

My guess is that none of us know enough about Critical Race Theory to engage in solid discussion about it.

would be nice to have dates attached, like a REAL history book

They say things like “during the reign of king so-and-so” to place a timeline to events and they give how long various people lived so that you can ascertain the number of years that passed. They obviously weren’t counting down to year 0 in the BC/BCE period. They did count years in other ways, and I don’t know the extent to which any of that was translated out of the Bible or just never there in the first place.

Has anyone ever done it? Connect biblical events to actual events that have reasonable estimates of dates?

Biblical literalist chronology is the attempt to correlate the theological dates used in the Bible with the real chronology of actual events. The Bible measures time from the date of Creation (years are measured as anno mundi, or AM, meaning Year of the World), but there is no agreement on when this was. Some of the better-known calculations include Archbishop James Ussher, who placed it in 4004 BC, Isaac Newton in 4000 BC, Martin Luther in 3961 BC, the traditional Hebrew calendar date of 3760 Th...

For example, the book of Esther starts in the third year of the reign of King Xerxes / Ahasuerus (same guy, two names, don’t recall the reason for that). He gave a party that lasted 180 days.