We probably don’t need a separate thread for each tournament or an annual one.

Anywho, this “feud” between Bryson and Brooks is stupid. They (maybe just Brooks, 'cause he’s the butthole here) thinks it’s “Growing the game” by distracting from the actual sport? Seems to be a disservice to the sport itself. Might as well have Real Housewives get into a table-turning row in the clubhouse.
And, then the idiots (fans) get involved.

So, US Open at Torrey Pines this weekend.

Oh, and I am against professionals using Greens Books (provided by the tournament hosts to show the undulations of the greens). Make them figure it out themselves.

Make them figure it out themselves.

Would slow it down too much?? Only counter I immediately see.

Well, they should enforce the clock a lot more.
Some of these guys take up to a minute trying to read greens. And that’s WITH the Greens book. I don’t mind too much, since I’m watching at Plus Speed on TiVo (not watching live, ever). Without the Greens Book, players would spend a lot more time during practice rounds making their own Greens Book.

Without the Greens Book, caddies would spend a lot more time during practice rounds making their own Greens Book.

Nice finish. Bad for the game, 'cause neither of little bitches won, but best golfer of the week won. At one point, they showed the hens on split screens. 'cause someone wanted to see that? They’re four holes apart. Did they think one was going to photobomb the other?
Fox put on a shit show for five years, so poorly, it decided to get out of its contract. No need to continue that. 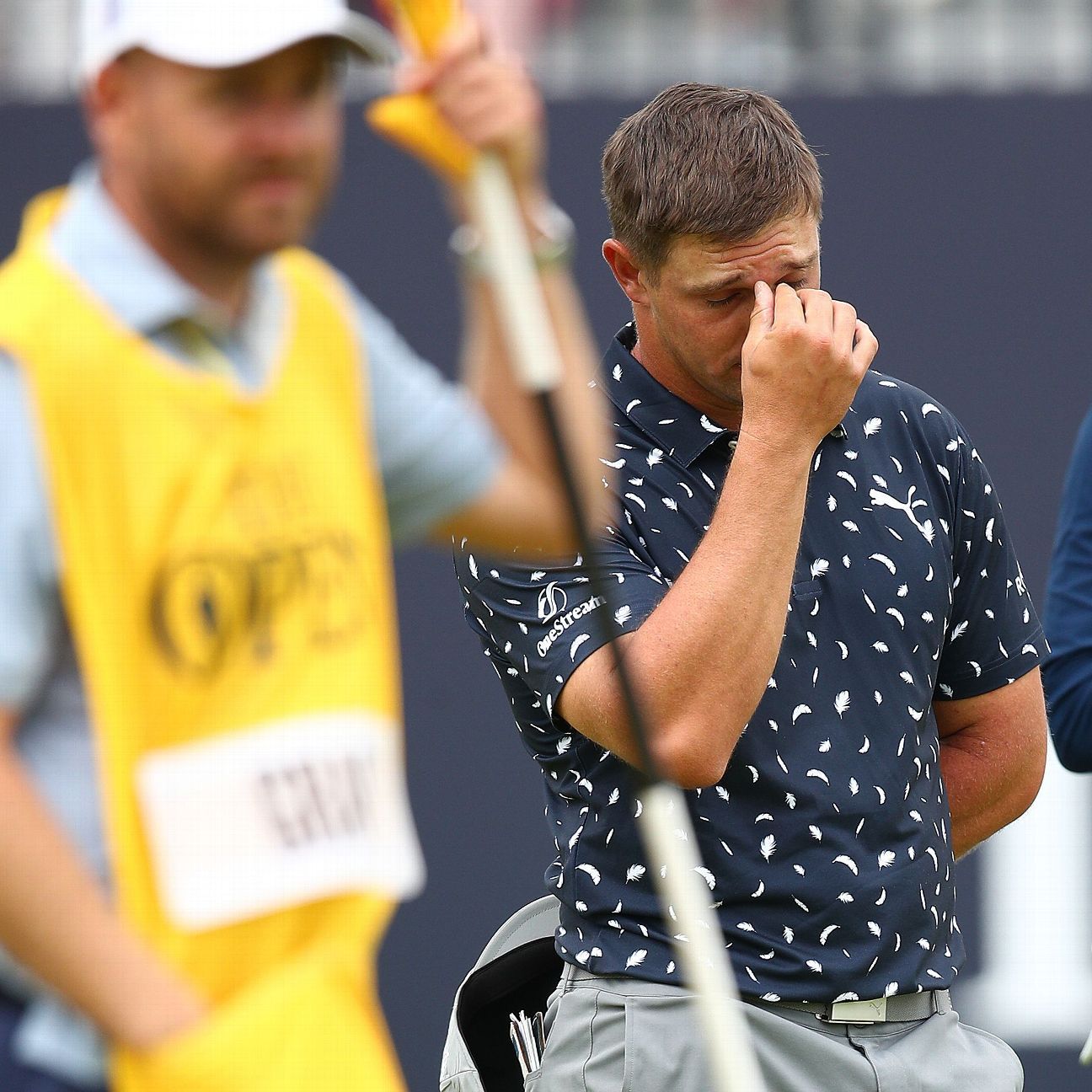 After hitting four of 14 fairways at The Open on Thursday, eight-time PGA Tour winner Bryson DeChambeau spoke out, blaming his driver.

I think hitting it straight (or where you want it) is paramount in golf. If your driver and you cannot combine to hit it straight, get another driver, and too bad if it doesn’t go as far as you want it to.
“Bad luck,” driver,"… seeing a pattern where he is never to blame.

Bump, for The Ryder Cup, starts Friday.
I say, put the two jackasses together, lose one match instead of losing two, save other golfers’ energy instead.

U.S. leads 3-1 after the morning session. Cantlay and Schauffele blew out McIlroy/Pouter 5 and 3 after being up 5 holes through 7. Means nothing for the final outcome, I think we tend to lead this and then get fucking routed in the afternoon session and then all day Saturday.

The par-5 5th hole. Three of those are other guys, one of those is DeChambeau. 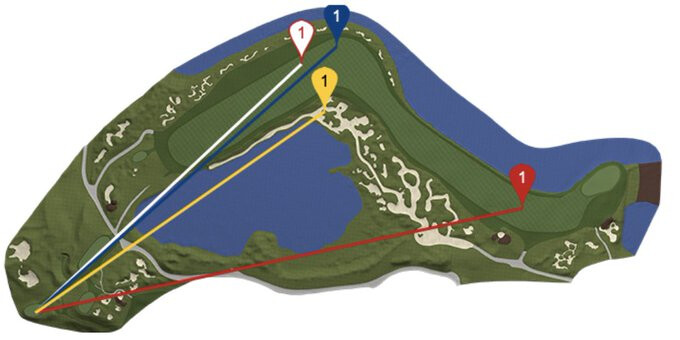 That aerial is helpful. The TV showed McElroy hit more directionally like dechambeau and it was like 330 to carry the traps. I wondered how on earth they were supposed to play.

6-2 Americans after the first day. Best opening day start for the U.S. since 1975. Goes a hell of a long way toward 14.5 points, usually we’re down at least 5-3 here. Strong Day 2 showing could make things much more comfortable on Sunday, and then it would be a matter of not having a collapse like Medinah, 2012.

Lots of complaining (presumably from people in Europe) about behavior of American fans. Didn’t realy cheeseheads were going to be that big of a problem. Maybe it’s all the out-of-staters? Don’t we have this every time now, the visiting team squawks about the behavior of the fans and the home side doesn’t do anything about it?

Windy tomorrow, out of the west at 10-15, gusts to 25. Might see a few shots take a swim on the holes near the lakeshore.

9-3 Yanks after the morning session. Blowing a lead in the match against Garcia/Rahm match doesn’t come back to haunt us. (Yet?)

3.5 points to win back the Cup. It would take a truly historic collapse here, and I can’t see it happening.

Start to finish, it was a rout.

Bump…
Nothing major (literally!) happening, but Google believes that I am interested in every golf article everywhere.
Mostly true. Saw this article about “A stat to make Golf more interesting to watch.” 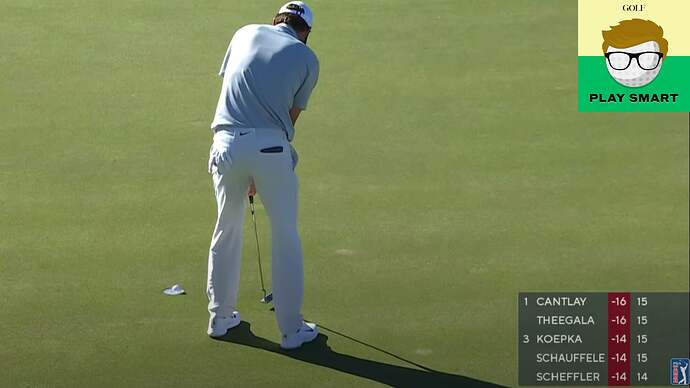 Why this basic birdie stat would immediately upgrade golf broadcasts

In today's Play Smart, we're leaning on cricket for ideas about how to improve the way golf broadcasts are presented.

Pish-posh, I say.
Could instead with the same model create predicted “maximum likelihood” final scores for each player, updating them as they play. Test it on, say, the 1986 Final Masters round, to see just how useless it is to predict one person’s score. (Models are great for predicting averages/variances of many players’ scores.)
I mean, after 54 holes, how would any model predict, using the prior three rounds, anyone other than the leader to win the tournament?
Best a model could do (heck, Tiger has done this work in his head, “I figure -16 would win the tournament, so I needed to shoot 67…” paraphrased, and he accounts for the day’s weather) would be to predict the tournament’s winning total score, then determine what each player would need to win. So, arithmetic.

And, even then, golfers know what others are doing on the course, know that it’s possible for themselves to do as well, and work at doing it. They are privy to the emerging information as well. Just saying this new stat won’t make anything more interesting (at least for me).

Alright, golf’s non-golfing award for popularity goes to that most popular of non-golfers, Tiger Woods!
Now, he had a great impact (into a tree) on the game, but that can’t stop him (though it did, cuz physics)!

I certainly don’t know nor understand the rules of golf, but shouldn’t this count as a stroke? …and add in a penalty stroke for starting over? 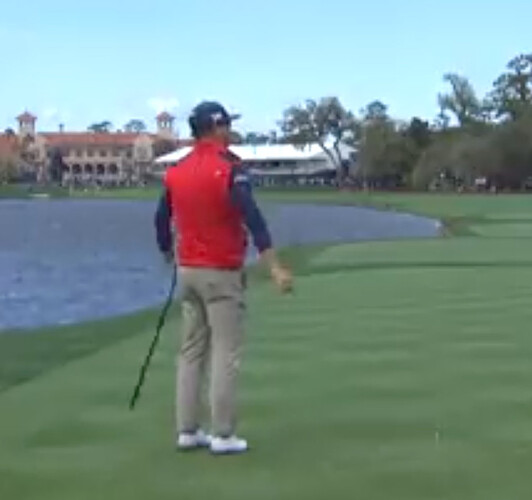 Players 2022: Zach Johnson could have actually killed someone with his latest...

The word "carnage" is being tossed around the Players on Saturday, and for good reason with all the high scores being posted in the high winds swirlin around TPC Sawgrass. But Zach Johnson could have actually killed someone. And we should have all...

dr/w-version: Johnson hits ball off of tee during practice stroke. He re-tees it and goes on as if life is normal. Yuckity yucks all around.

I certainly don’t know nor understand the rules of golf, but shouldn’t this count as a stroke? …and add in a penalty stroke for starting over?

i think it is that he didn’t “address” the ball so there is no intent and so he doesn’t get the stroke. that was the explanation I remember from the last time he hit a ball in a warm up swing

he didn’t “address” the ball