And for disobeying the hierarchy. 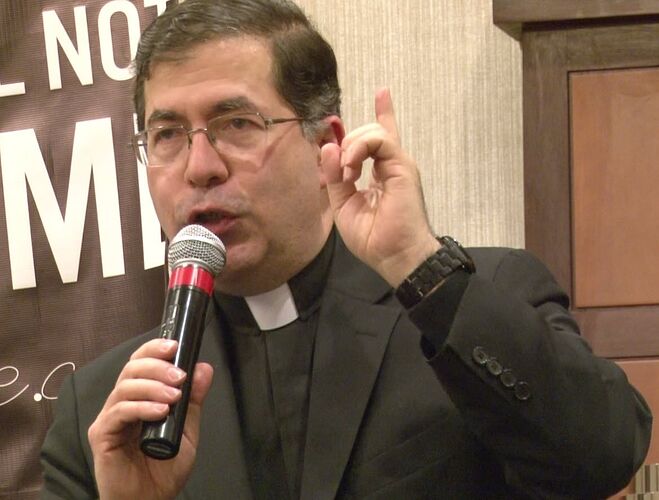 The Dicastery for Clergy issued the decision on Nov. 9 for "blasphemous communications on social media" and "persistent disobedience of the lawful instructions of his diocesan bishop," CNA has learned.

I expect this will get political, so let’s just start there.

Details of the reasoning not yet public, but apparently he was a huge MAGA head.

he was a huge MAGA head.

shouldn’t that be “huge MAGA lack-of-head”?

Details of the reasoning not yet public, but apparently he was a huge MAGA head.

He seems pretty aligned with most catholics I see online, so this will be interesting.

For those who are curious what he did, from Lucy’s link (emphasis mine):

Pavone served on official Trump campaign outreach positions in 2016 and was originally a co-chair of Trump’s 2020 pro-life coalition, as well as an advisory board member of Catholics for Trump. Canon law forbids clerics from having an active role in political parties unless they receive the permission of their bishop.

In November 2016, Pavone filmed a video at the Priests for Life headquarters, urging support for Trump. The video was staged with the body of an aborted baby laid before Pavone on what appeared to be an altar.

Zurek said soon after the video’s release that he would open an investigation into the incident, calling it “against the dignity of human life” and “a desecration of the altar,” adding that “the action and presentation of Father Pavone in this video is not consistent with the beliefs of the Catholic Church.”

Note that it doesn’t specify that this is the reason he was dismissed. They are apparently not saying.

In tweets that were subsequently deleted, Pavone reportedly called then Democratic presidential nominee Joe Biden a “[expletive] loser” and said the Democratic Party was “God-hating” and “America-hating” and that Biden’s supporters “can’t say a [expletive] thing in support of their loser candidate without using the word Trump.”

“What the hell do you have to say for yourselves, losers?” Pavone asked.

Pavone also reportedly tweeted that he would hear the confession of a Catholic who votes Democrat, “but we are trained that in the absence of repentance, absolution has to be withheld.”

Yikes. That absolutely goes against [my understanding of] Catholic teaching and also jeopardizes the church’s 501c3 status. While it’s unlikely that would be revoked over a rogue priest’s Tweets, it sounds like he was making himself more of a liability than an asset.

It is perhaps worth noting that Joe Biden is Catholic.

As a pastor I am getting closer and closer to believing we just really shouldn’t even vote. Not sure it serves any purpose. I can submit to any authority. Jesus did. Want to make it illegal to worship? That’s fine. Arrest me, I will hopefully deserve it. Otherwise you do you, i’ll do me.

we just really shouldn’t even vote.

As a pastor I am getting closer and closer to believing we just really shouldn’t even vote. Not sure it serves any purpose. I can submit to any authority. Jesus did.

This path has dangers too, as when the lutheran church in germany rather infamously did too little to resist nazism. that attitude went all the way back to writings of martin luther on submitting to secular authorities.

I hope he doesn’t worship Trump… sounds like he is more likely a single-issue pro-life voter. But who knows.

Anyone acting as clergy. We definitely shouldn’t tell others who to vote for.

You can definitely throw shade at bad character. I don’t know what the day to day was like in Germany but I certainly threw shade at Donald Trump’s character the last several years. No need to endorse anyone else to do that.

Also it’s quite clear to me that Hitler won’t be the last person to be like Hitler. It’s happened over and over and over again throughout human history. The only thing that is changing is the ability to impact more and more people when it happens. Humanity as a whole hasn’t learned anything from its past.

My take on politics as a Christian is that one side wants us to change our values to match the worlds values and one side wants to leverage our values for their own quest for power. I don’t think either are very worthy of support. Better to be a sojourner. Besides salvation it’s the lesson of the New Testament. Embrace your faith not the world. The world is corrupt.

We definitely shouldn’t tell others who to vote for.

And you can’t while representing the church and remain a 501c3 organization.

Privately of course you are entitled to a vote same as anyone else.

And you can’t while representing the church and remain a 501c3 organization.

Has this ever been actually enforced?

The first headline I saw mentioned only his social media comments. Those were bad too, but then I read about the stunt with the aborted baby. :exams: :exams: Yeeeah, no. Absolute sacrilege against the altar. Good riddance to him.

Has this ever been actually enforced?

I suspect enforcement is highly lacking, although conceivably the new spending on the IRS could help with that.

The Urban Institute published (in 2011) some details about organizations losing their tax-exempt status, but it didn’t list the reason they lost it. I suspect a lot are due to not having the right cover sheet on the TPS report rather than actual wrongdoing. They said 275,000 organizations lost their status though, which seems like a lot. I wonder how many lost and regained.

Absolute sacrilege against the altar.

To be fair, it wasn’t an altar at all… it “appeared to be” an altar, but was actually a table in an office.

Still, plenty of other stuff to merit dismissal even without the altar bit.

But also: How did he even get one?? (On second thought, maybe I don’t want to know.)