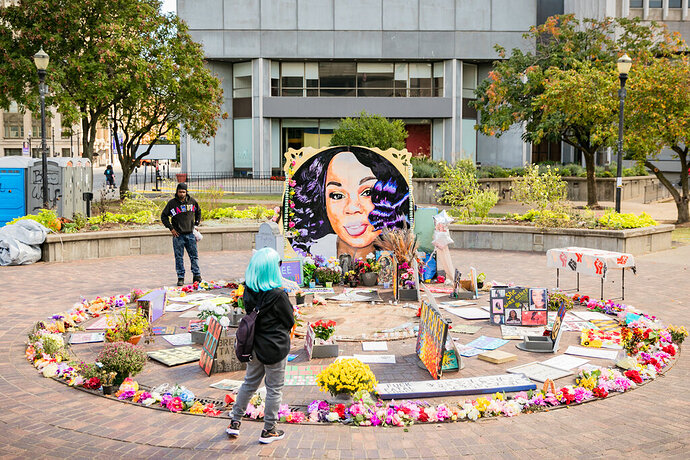 The police fatally shot Ms. Taylor during a nighttime raid on her apartment in Louisville, Ky. Officials said two officers had lied in order to get a search warrant for Ms. Taylor’s home.

Charges do not include killing her, but in lying to obtain the warrant and to investigators afterwards.

This has been coming for a while. They should throw a manslaughter charge in there if convicted IMO.

[Cue 87,787 people explaining why Breonna is still at fault.]

These are federal charges, so they probably cannot charge them with manslaughter or murder, which I think are state offenses.

:swear: link is now paywalled, though I can still see it since it was orginally e-mailed to me by the NYT.

Here are a few paragraphs (not all consecutive in the original)

Federal officials on Thursday charged four current and former police officers in Louisville, Ky., who were involved in a fatal raid on the apartment of Breonna Taylor, accusing them of several crimes, including lying to obtain a warrant that was used to search her home.

The charges stem from a nighttime raid of Ms. Taylor’s apartment in March 2020, during which officers knocked down Ms. Taylor’s door and fired a volley of gunshots after her boyfriend shot an officer in the leg, believing that intruders had burst into the home.
…
Merrick Garland, the attorney general, said at a news conference that members of an investigative unit within the Louisville Metro Police Department had included false information in an affidavit that was then used to obtain a warrant to search Ms. Taylor’s home.

These are federal charges, so they probably cannot charge them with manslaughter or murder, which I think are state offenses.

You present a false dichotomy there. “Is it purely because the FBI was brought in to investigate, and some people lied to them?” purely? probably not, though those particular charges would not have been filed if no defendants had (allegedly) lied to the FBI. But the alternative that “the American people have decided all high-profile cases should have Federal jurisdiction if the state fails to administer satisfactory justice” isn’t right either.

So why DOES this case have Federal jurisdiction?

IANAL, but the need for a warrant is a Bill Of Rights issue. So lying to obtain a warrant is therefore presumably a federal matter. I don’t know what the other federal charges are.

Oh, yeah, I didn’t intend to imply those are the only two alternatives, just the extremes. I realize there are in-between possibilities, like, the case kinda-sorta had elements that routinely get Federal jurisdiction (thanks, twig93), but public opinion still played a role.

If public opinion prevents some serious miscarriages of justice, that’s a good thing, even if some other violations by police (even serious violations) have gone unpunished.

I agree on the good thing, but I do not like judicial proceedings being decided by public opinion. Yes, I agree the good probably outweighs the bad in this case. But I seem to be the only person acknowledging both.

IANAL, but the need for a warrant is a Bill Of Rights issue. So lying to obtain a warrant is therefore presumably a federal matter. I don’t know what the other federal charges are.

IANAL / IAN an expert…but the implications of sovereign immunity may also apply here.

We’ve interpreted the federal Bill of Rights as imposing certain constraints on states (and therefore potentially on local governments) which cannot be circumvented by the states’ sovereign immunity. The reliance on the federal Bill of Rights and the avoidance of the state sovereign immunity opens the door to federal courts being an appropriate venue.

OK, I read the NYTimes article I posted above. They said it is unlikely that the officers who fired the shots that killed her can be prosecuted because they were returning fire in what they believed was a legitimate law enforcement operation.

In fact, only one officer involved in the raid itself has been charged. He fired through the window that had blind closed on it so he was shooting blind and some of his bullets went into a neighbors apartment.

The other three officers — two detectives and a sergeant — are accused of including information they knew to be false in an affidavit submitted to a judge in order to obtain the search warrant, and then lying to cover up what they had done.

They are accused of violating Taylor’s civil rights against unlawful search and seizure.

I think the FBI has jurisdiction to investigate local law enforcement agencies when they get out of line. Probably a holdover from the past when organized crime had much more of a foothold in local government than it does now. A lot of this stuff is from the J Edgar Hoover days.

That doesn’t give the federal government jurisdiction though.

I think they can jump in when someone’s civil rights are violated criminally (among other federal crimes occurring within the incident which may overlap w the state charges and I think the state charges take the lead, if tried for them). Or other charges seem important to assert in the interest of “justice.”

To your question - does public opinion bring them in? i think it does. But the charges and trials/pleas still have to stand up to scrutiny. One can violate federal statutes at the same time you are violating state statutes even if the state can’t charge you with the fed charges specifically. Fed prosecutors (from what i am told) don’t like to lose, so they jump in on these high profile cases bc the cases seem so f’d up and the state charges/system alone can’t be trusted to cover it well enough. I don’t think the fed system jumps in when the state demonstrates they got it covered - not every murder convict at the state level has fed charges automatically brought - but i suspect they could have them brought.

So we have in some cases a redundancy of ways a defendant can be charged and it is not usually accessed bc the state charges usually get it right enough.