I can’t believe I’m trying to start two threads in one day, but this is really unusual.

The unusual part is that ProPublica got the details, not that those details include anything surprising. Guess what, rich people get most of their incomes from capital gains, and capital gains aren’t taxed when they accrue. (I’d change that.) 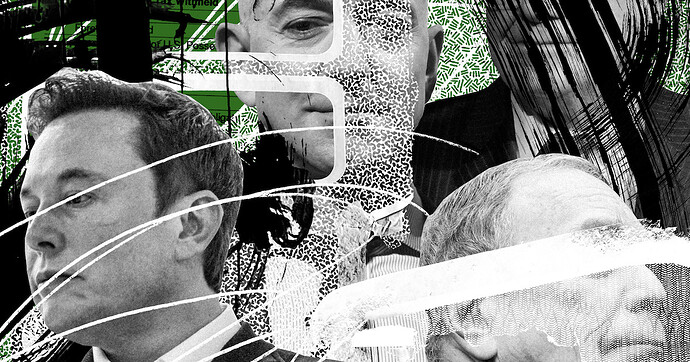 The Secret IRS Files: Trove of Never-Before-Seen Records Reveal How the...

ProPublica has obtained a vast cache of IRS information showing how billionaires like Jeff Bezos, Elon Musk and Warren Buffett pay little in income tax compared to their massive wealth — sometimes, even nothing.

Thanks for posting. I just emailed it to myself to post (since starting a new thread from my phone is harder than just replying to other threads for some reason).

How would taxing capital gains as they accrue work in practice? I’m assuming the IRS doesn’t have a record of every transaction made and the cost basis for the transaction, and then also they’d have to know how much has been previously taxed for the next year’s accounting. When something crashes, will tax receipts go down because of losses that were previously on paper, but are now realized each year?

It makes the argument about tax rates and “progressive tax” rates a nonsensical argument. It doesn’t matter if the tax rate is 34% or 39%, it’s only going to impacts the “chumps” who aren’t ultra-wealthy enough to avoid any and all tax rates.

Of course, it might be a great headline to say that uber-billionaire guy didn’t pay any taxes in 20xx, in order to get a better understanding of the situation, I’d really like to see their tax bills over something like a 5-year period.

This will be an interesting story to follow. What tax laws should actually be changed in order to make everyone pay their “fair-share” (whatever that is).

The 5 year charts were in the article.

Isn’t the game here to sit on unrealized gains until you need cash, and then sell some amount of your stock and pay 15% in FIT? I guess what I don’t understand is aren’t they paying tax when their shares are granted? Or is that simply such a small sum on an annual basis relative to their accumulated wealth?

The income patterns are interesting. Bloomberg has around 2B of income each year. I presume a lot of that is going to charity. Bezos and Musk have a few outlier years where perhaps they purchased a home or a yacht. Musk is maybe the most surprising with a few years in single digit millions. He has always claimed to not have much actual cash to spend, perhaps he really is that restricted in his ability to transform his stock into cash.

Makes one wonder how Bezos pays for that super-duper (bigger than mere “super”) yacht. I assume the yacht company wants its money in some form or another. One way would be to pay the company with money not seen by the IRS – offshore/Swiss accounts. Another way is to have the yacht in Amazon’s name, and either use it for “business purposes,” or sell it to Bezos at a huge loss. Again, Bezos won’t pay taxes on that “profit” until he sells the yacht, potentially back to Amazon at yet another loss.

Guessing Musk means that he can’t get access to cash without paying taxes on it, so he’s “restricted” in that strictest sense.

Also, I think often they get long-term options granted to them, so that’s a lower initial income that is potentially worth a lot later when they buy the stock at some very low strike price (and not simply sell the option, 'cause taxes). that would still require some cash to exercise the option.

I would start by taxing long term capital gains at the same rates as labor.

Though I understand this is easier said than done. There is a huge market for moving money around to avoid these kinds of things.

Makes one wonder how Bezos pays

The vast majority of the ultrawealthy’s loans do not appear in the tax records obtained by ProPublica since they are generally not disclosed to the IRS. But occasionally, the loans are disclosed in securities filings. In 2014, for example, Oracle revealed that its CEO, Ellison, had a credit line secured by about $10 billion of his shares.

Last year Tesla reported that Musk had pledged some 92 million shares, which were worth about $57.7 billion as of May 29, 2021, as collateral for personal loans.

Use your stock as collateral on loans. Your heirs will sell the stock to repay the loans, but they won’t pay any income tax on the gains. While your alive, you expect the total return on the stocks you didn’t sell to buy the yacht to at least match the interest rate on the loan.

How would taxing capital gains as they accrue work in practice? I’m assuming the IRS doesn’t have a record of every transaction made …

The same way they get records on my personal consulting business – they tell me I have to provide them for tax purposes.

If you have more than $1 billion in unrealized gains, you (ie your accountants) should know that. They provide current market values and cost basis. I’d say you pay tax on the portion of your unrealized gains that exceeds $1 billion.

Yes, tax collections would go up somewhat when the economy is booming and down somewhat when it is tanking. That’s a good side effect of taxing unrealized gains.

You’ll kill employment if you do that. if their wealth is tied up in company, taxing capital gains on ownership means they have to pay taxes every year, depleting their company. And that very directly means way less growth, and thus less employment.

Entrepreneur has a company worth $1B. They take some huge income like say $2MM. the company grows 5% and hires a ton of people - they still take their $2MM income but just hired 200 people.
Now we implement capital gains onthat $50MM of growth last year. Say they have to pay $15MM in taxes. They’re only making $2MM, so they’re going to cannibalize the company and lay off people in order to pay that. We’ve gone from employment growth, to layoffs and killed future opportunities just to implement these taxes. this is a very bad tax.
There has to be a better way. Maybe tax on inheritance. Or when they sell (as they likely are now). If someone’s cashing out 20MM in stocks, put a 60% tax rate on it. Whatever, it doesn’t kill the company’s growth it just dents the upper class when they try and cash it.

I agree that the value of companies is too volatile and subjective to tax unrealized appreciation in value.

I guess what I don’t understand is aren’t they paying tax when their shares are granted?

I’m guessing the biggest tax avoidance strategy here is simply taking advantage of not taxing unrealized gains. So, they may have paid tax when the stock was “granted”, but that’s small potatoes compared to later gains. (And, most of these people were founders who simply owned the stock when the company was founded. There was no tax event at that time.)

I would do that, too.
I expect that the difference between tax rates generates a tax-avoidance industry that tries to re-classify labor income as investment income. “Carried Interest” comes to mind.
Making rates equal should reduce that type of activity.

You’ll kill employment if you do that. if their wealth is tied up in company, taxing capital gains on ownership means they have to pay taxes every year, depleting their company.

For some reason, you assume that these people who own corporations can’t sell stock.

An owner with $2 billion in stock and a tax bill of $120 million (say 40% of last year’s gain of $300 million) sells 6% of his/her stock. There are plenty of investors out there willing to buy into that winner.

(Maybe we have a communication problem. The article is about the 25 richest Americans, not about the family that has the successful local house building firm.)

For some reason, you assume that these people who own corporations can’t sell stock.

They can if it’s publicly traded and you want the owner to have a rapidly decreasing to 0 percentage of ownership. Same end result, the company goes to 0.
If they’re privately held, then yeah, you can’t effectively sell 6% of your stock.

any realized capital gains should just go into your income tax for the year that you realize it.

No, the original billionaire owner is not going to go to 0% ownership unless the company is fabulously successful. In that case the company does not “go to 0”.

Of course privately held companies can sell stock. They just have to find larger investors. Plenty of firms would love to introduce you (the owner of a very large private company) to potential investors. If tax laws encourage these very large companies to go public, that’s a plus in my mind.

There has to be a better way. Maybe tax on inheritance.

Make it progressive by excluding the first … (checks personal net worth… hmm, decides against disclosing) … $500,000 or so. And not each beneficiary. Total.

My Uber wealthy friend suggest hard-line taxes above 10mm. Like maybe close to 100 percent. His opinion is that 10mm is enough for anyone and that the company was built using public resources.

He’s a weird blend of dirty capitalist and liberal. he tells me stories of how they compete and it’s a bloodbath. He has the coolest business stories.

some people like to live in castles and want that fantasy, I think people should be able to fulfill that fantasy if they want to, since YOLO, but to a certain extent.

Expensive real estate can get into 00 millions, but not billions. Nobody needs billions.

I was thinking about this this morning before coming here to post, and my line was 15M, but I don’t know what the “after 15M” taxation would look like, except that I was thinking about it as a wealth tax due to the article listing the increases in wealth and the disparity in taxes, but maybe an unrealized capital gains tax is essentially the same mechanism if you had such a threshold.