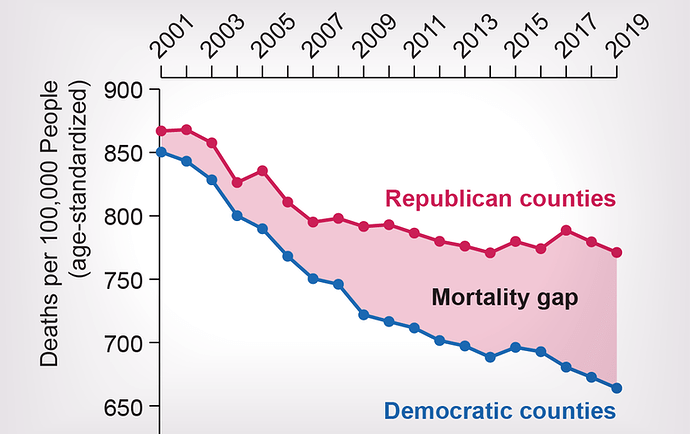 People in Republican Counties Have Higher Death Rates Than Those in...

I’d like to see if purple counties, ones that switch back-and-forth over time, have mortality rates that actually change when the county swings from one way to the other.

Otherwise, yeah, a large group of dumb people won’t live as long. They do dumb things, make dumb choices, don’t learn things, don’t go to doctors when it might be absolutely necessary, etc. These affect the mortality rate.

Cause-of-Death Contributions to Socioeconomic Inequalities in Mortality in...

This report investigates the growing disadvantage in mortality between least and most affluent populations.

That said, I kind of wonder about this “Republican” and “Democratic” counties. Are they allowing the categorization of said counties to change over time? I mean, many of the same counties went for Obama in 2012, Trump in 2016, and Biden in 2020. So that makes me question the use of line graphs if it’s different sets of counties each time. Make it a scatterplot, then. I assume they categorize counties for all time, and if so, I wonder if it covers all counties (I assume Los Angeles is a “blue” county… and it’s huge. It is also heavily Hispanic, and the mortality trends for U.S. Hispanics are not what most people assume.) Some analyses I’ve seen omits most counties, cherry-picking the most extreme.

Mainly, I’m wondering if they’re catching some confounding variables here, like whether it’s rural/urban/suburban and income/education levels (thus my linking to the SOA study I did), and not so much capturing policy differences. If you’re mainly capturing lifestyle differences, such as whether you smoke, drink, and are obese, that may significantly affect your overall mortality levels. And I wouldn’t be surprised if those lifestyle differences are correlated with political differences, and the causal arrow goes in the other direction.

FWIW, they would do better to make a more complicated analysis if they want to do county-level mortality trends. Trying to tie it to a changing political trend is somewhat silly.

I prefer the SOA’s research.

Guessing purple counties were excluded, cuz there would be no conclusion reached to tie changing mortality rates with changing political climate.

Yeah, I think there may be some confounding variables here. 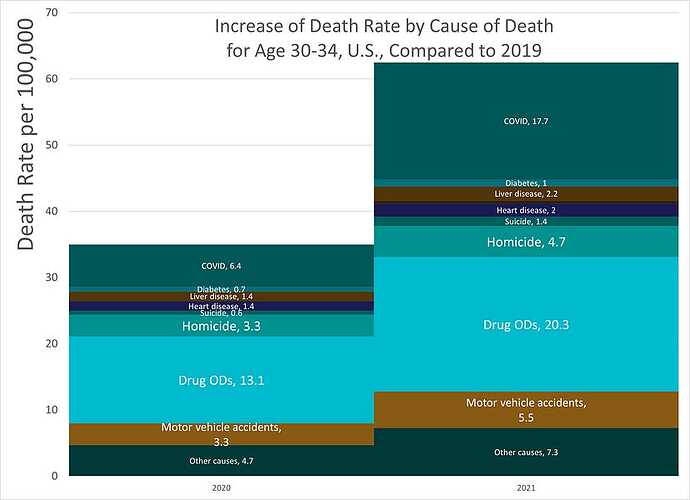 Millennial Massacre Part 2: Increase In Mortality for Ages 18-39 for...

Mainly Drug ODs, actually. COVID came in second for most of it.

I stumbled across this paper on the “missing Americans”, the authors’ term for life lost due to excess mortality relative to peer nations. 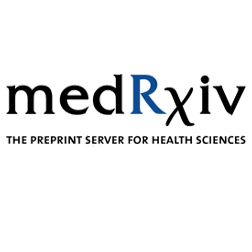 We assessed how many U.S. deaths would have been averted each year, 1933-2021, if U.S. age-specific mortality rates had equaled those of other wealthy nations. The annual number of excess deaths in the U.S. increased steadily beginning in the late...

To be extremely nasty about the list of countries they compared against:

Maybe they might want to think about the racist implications of what they just did? Just a thought?

We also compared ASMRs for U.S. racial/ethnic groups relative to the average of other wealthy nations. We obtained data on U.S. mortality and population denominators for 1999-2021, stratified by age and race/ethnicity from the Multiple Cause Mortality Files hosted on the CDC WONDER database (downloaded: April 14, 2022). We computed ASMRs for: Non-Hispanic Black (henceforth Black), Non-Hispanic White (White), Hispanic, Non-Hispanic Asian/Pacific Islander (Asian/Pacific Islander), and Non-Hispanic American Indian/Alaskan Native (Native American) persons. For each population subgroup, ASMRs were extracted for ten-year age groups, aligned with the data from HMD. For ease of exposition, we report on wider age bands: 0-14, 15-44, 45-64, 65-74, 75-84, 85+ years.

Would you care to share your thoughts on a proper evaluation of the issue?

Two things they could do:

The UK has racial/ethnic diversity, and I’ve seen them breakouts of regional mortality trends, just as we’ve seen the “Trump counties” analysis, there have been “Brexit constituencies” analyses, I believe. That might be useful. The other countries… not sure if they have similar data breakouts, but it may be illuminating. Most of the other countries don’t have much in the way of diversity, or if they do, it’s of fairly recent vintage compared to the U.S. 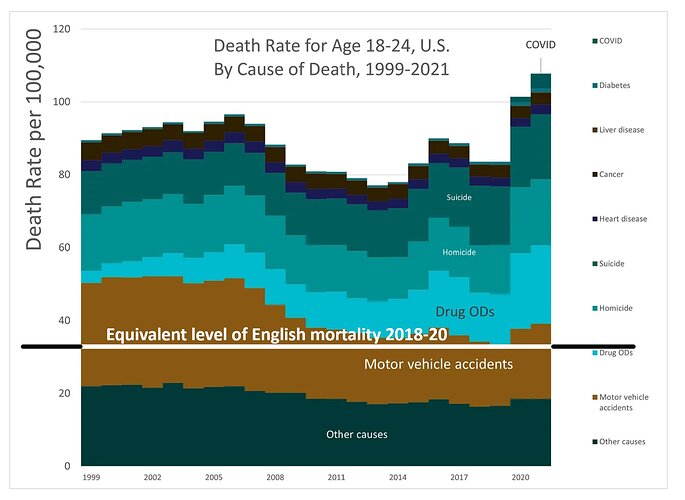 @
Just one tweet from an interesting thread here from @meepbobeep (thanks Mary!), but I couldn't help comparing mortality in just one age group with that in England. It's quite a comparison! 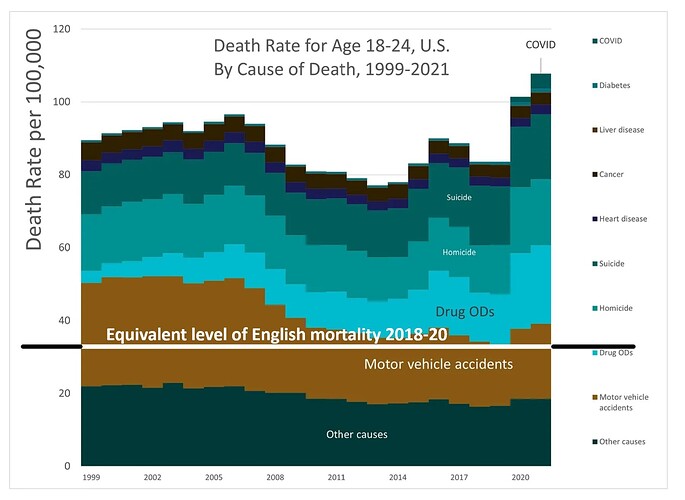 The thing is, they’re trying to make a point about “structural racism” (which actually doesn’t have much to do with the drug ODs – check this out: Drug Overdoses, Part 1: High-Level Trends, 1999-2020) and access to healthcare (which doesn’t have much to do with the age 15-44 trend). To make that argument in comparison to other countries, they need to make appropriate comparisons, not just “years lost”.

John Roberts has extended the UK vs U.S. comparisons, btw. 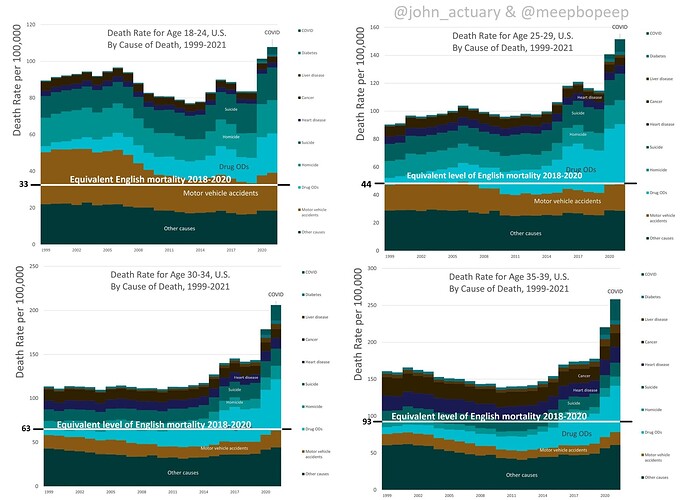 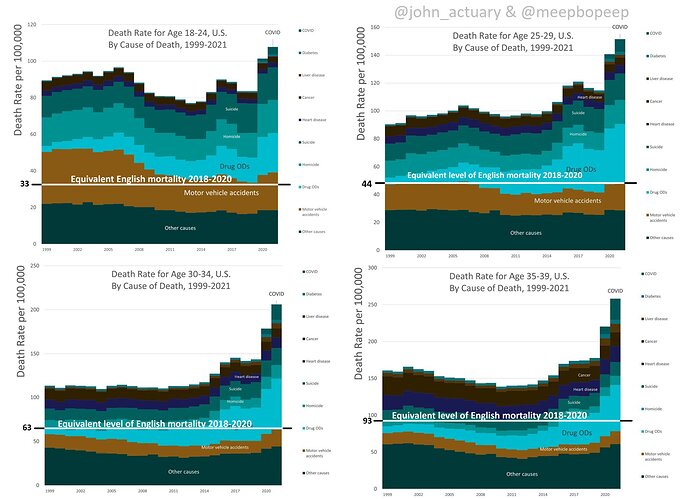 @
I posted yesterday a comparison of recent 🏴󠁧󠁢󠁥󠁮󠁧󠁿18-24 mortality compared with recent (and past) US mortality, using @meepbobeep's excellent graphs. I've now added ages up to 40 - the pattern is similar, albeit the disparity lessens slightly at the upper end. 1/
meep July 24, 2022, 7:27pm #175

I put a bug in his ear to see if I can get him to get cause-of-death comparisons… (mainly because I don’t know where the UK data are… if somebody can point me to the UK equivalent of CDC WONDER, I’ll get it myself)

Scotland, evidently, has a bad drug OD problem as well 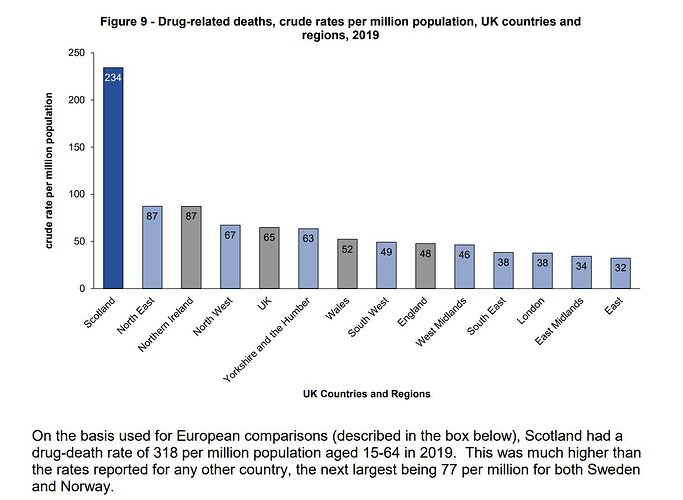 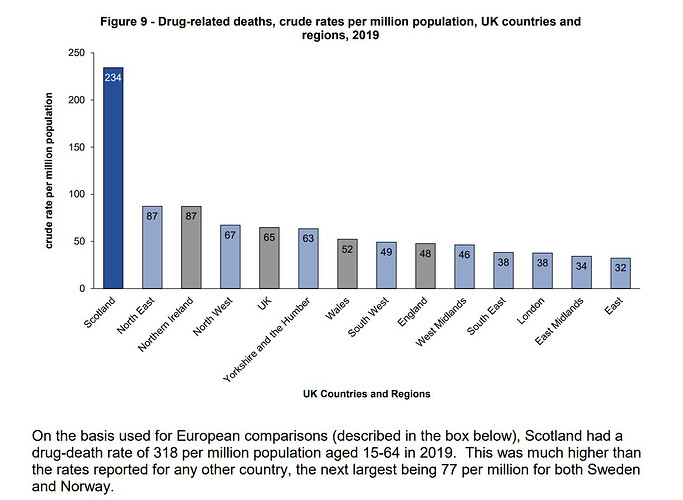 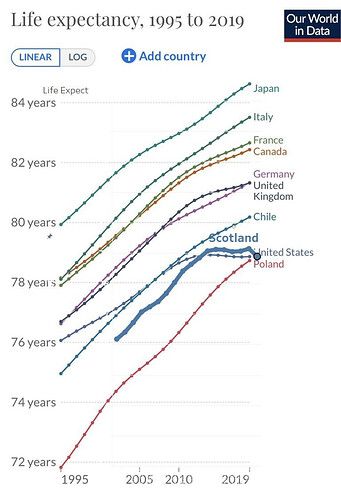 Sorry, (not at all apologetic) – going to dump some of the links they’re giving me into this thread:

Annual data on the number of deaths registered in England and Wales by age group, sex, year and underlying cause of death, as defined using the International Classification of Diseases, Tenth Revision. 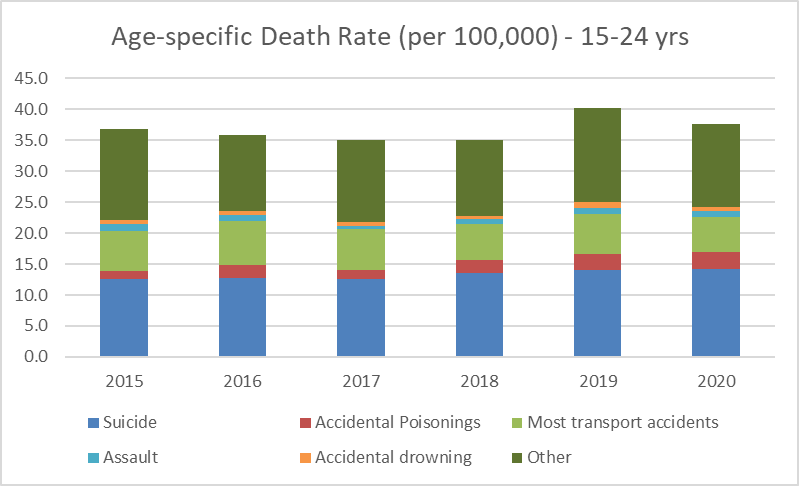 @
Here's the graph for 15-24yrs. Suicide the leading cause of death, followed by motor transport accidents. 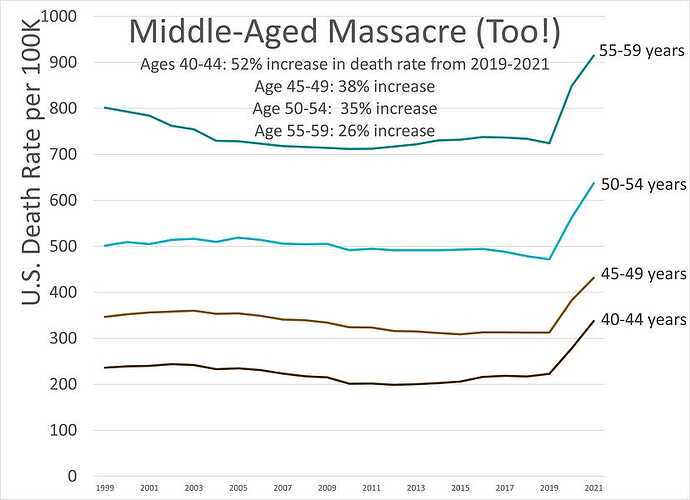 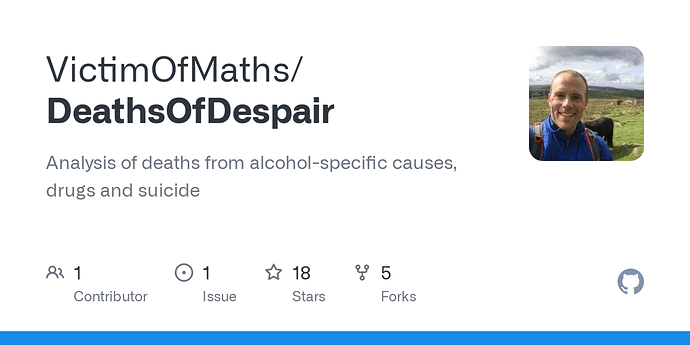 GitHub - VictimOfMaths/DeathsOfDespair: Analysis of deaths from...

Drug/alcohol-related deaths and suicides – read the labels carefully, and it looks like it’s by count and not rates.

This is England & Wales - not happy with this one right now 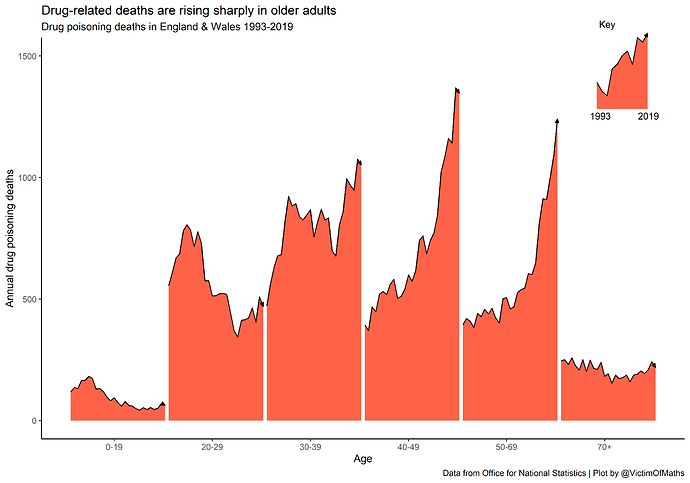 U.S. – this one is rates, but I think it’s crude and not age-adjusted 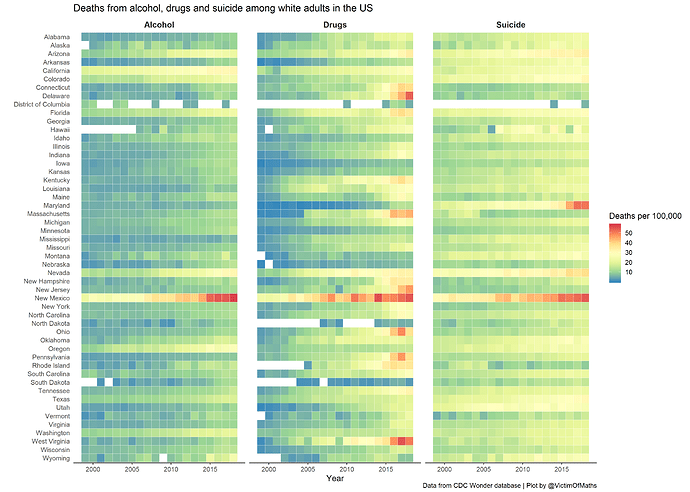