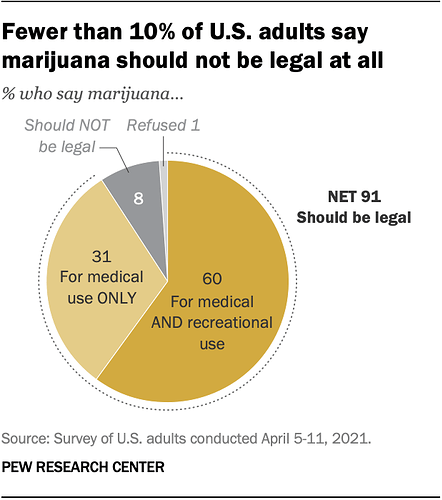 Probably similar support for a public health insurance option but good luck with that. Politicians do not always act on the wishes of the majority of voters.

They don’t need any Republicans, Kamala is the tiebreaker. While it’s possible, filibustering a bill with like 70+% popular support seems inane.

It’s high, though we’ve had filibusters on other ultra-popular democratic bills.

I think Manchin won’t support it, which is more of a problem than no Republicans supporting it.

It’s the same thing basically. You can think of Manchin as the worst Democrat, or the best Republican. We want to blame the guys in the middle, but really, a law like this should pass 90/10 or 80/20 or something, but the US is broken.

My mom similarly hates Susan Collins, and it doesn’t really make any sense. She happens to be in the middle with middling constituents. It’s not really her fault, unless she’s intentionally playing kingmaker for power.

I know I’ll sound like a broken record* here, but I have to mention that the first 10 states that legalized marijuana did it by initiative.

What do we do when something is popular but politicians won’t act? Well, in about half the states, citizens can go around the legislature and get a direct vote.

Not only does that get the measure passed in those states. It also shows legislatures in other states that the issue has support from people who take the time to vote.

'* That’s a reference to vinyl records, for those who aren’t geezers.

Not just marijuana either.

Oregon legalized psilocybin as well, rightfully so. MJ and psychedelics are probably the top two drugs that should be legalized.

It is a shame that medical research on psilocybins was restricted for so many years. I expect psilocybins will be legalized in Canada for medical reasons in not too distant future. Province of Alberta already has.

The business of mail order magic mushrooms is not really policed here in BC.

Another bot I see. @SpaceLobster what’s the procedure for these?

Thanks. I hit a delete and block button and they’re gone.

Minnesotans are ready to legalize adult-use cannabis and expunge cannabis convictions in our state – and I’m ready to sign it into law.

The 2022 election flipped the MN senate from R to D, giving the Ds a trifecta. Sometimes, elections have consequences.

Minnesotans are going further than some other states:

On-site consumption permits could be approved for events, and cannabis delivery services would be permitted under the bill.

Unlike in many legal states, local municipalities would be banned from prohibiting marijuana businesses from operating in their areas,

It would promote social equity, in part by ensuring that diverse licensing by scoring equity applicants higher.

I didn’t see anything about number of licenses. Are they limited?

I always thought of MN as hard blue.