Should we have 18 million people drawing unemployment insurance while so many employers are looking for workers? One KY lawmaker thinks we should suspend all federal unemployment benefits for 2-3 months in order to coax people back to work. 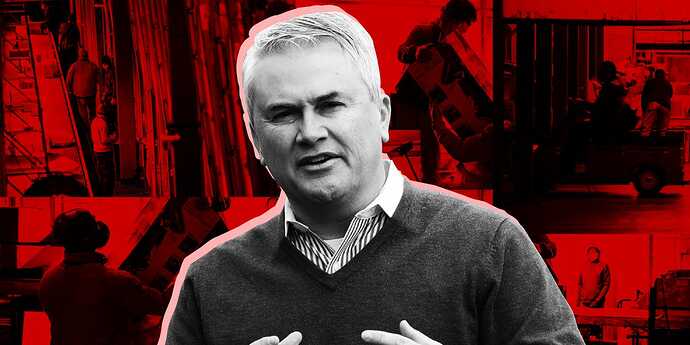 A Kentucky Republican on how to solve the labor shortage: 'temporarily...

James Comer, who says he's the only Congressman who lives in Appalachia, said "there shouldn't be very many unemployment claims being paid out."

Weren’t the Republicans blaming the extra covid benefits on the labor shortage, then that went away and nothing happened to the shortage? I guess you could save a buck to try and get more people working while you hurt the millions who really need it, but I don’t think it’s going to solve to problem he thinks it is going to solve.

My simple solution to the labor shortage is to eliminate the excess jobs, that way there’s fewer of them left unfilled.

Republicans should put more faith in their principles. I’m sure the free market will sort it out, that’s what it does!

It is sorting it out😀. Lower paid workers are getting more authority and for the first time in a long time there’s a strong need for unions. People don’t have to take crap anymore, they can quit and go find a new job next day.

Do you think having employers compete with government benefits is a free market result? I would doubt any credible economist would say that. I think that’s what the congressman is stating. These aren’t free market results.

Unemployment is insurance people have paid for the right to have access to. And if employers can’t compete with it, perhaps they should offer livable wages.

I was reading earlier this week that while people love to point at entitled lazy workers as the problem, the issue is that boomers are opting to retire rather than keep working. Perhaps we should remove government “benefits” in the form of social security access to force them to return to the labor market?

I was reading earlier this week that while people love to point at entitled lazy workers as the problem, the issue is that boomers are opting to retire rather than keep working. Perhaps we should remove government “benefits” in the form of social security access to force them to return to the labor market?

This is true.
Driving force behind labor shortage is a boomer early retirement, which is driven by all the government subsidies built into the retirement system.

Why not just cut all benefits to encourage people to work more?

I’m not going to blame those people for taking unemployment or food stamps and I’m happy to pay $0.25 more for a hamburger.

It always makes me shake my head because my Facebook feed has the camp of Boomers who often retired ~60 y/o with pensions complaining about Millennials, but every Millennial I know is either employed or in post-grad education. (Albeit, by being decently-off personally I’m self-selecting my sample)

The problem when wages go up this much is it leads to inflation. We’re seeing inflation every day. So a lot of the gains that low-wage workers are going to have are going to be offset and then some by increased inflation.

I’m not sure where he is offsetting. If he means low wages workers will see their actual purchasing power go down because inflation will offset all their wage gains “and then some”, he is grossly wrong.

When I do the math, I get the total wages of all the workers earning less than $15/hr in 2019 amounted to about $1.4 trillion. The GDP was about $21 trillion. So those wages were about 6.6% of the GDP. Since GDP is roughly the cost of everything we buy, a 100% increase in wages for those people would add 6.6% to prices.

Sure, wage gains concentrated at the low end of the ladder shift real incomes from owners of capital and higher wage workers toward lower wage workers. The low wage workers come out far ahead because the low wage component of the American market basket is so low.

(Note 1 here says “2.2 million working people are paid the federal minimum wage of $7.25 an hour or less. Approximately another 23 million people are paid between $7.25 and $11 an hour. Nearly half (42.4 percent) of working Americans make less than $15 per hour.” Making the Economic Case for a $15 Minimum Wage I did a lot of estimating from there. )

dont get me started about SSDI abuse…

so many people abuse it that the system makes it hard as hell for actual disabled people to get approved.

In rural areas, it is totally a thing to try to get SSDI approved whenever you can. Its like winning the lotto out here.

Unemployment benefits are administered by the state. I think he is bemoaning the fact that KY is much more generous than TN because it has a Democrat for governor verses TN which has a Republican. The 2 parties have a playbook for everything that governors don’t seem to deviate from.

Living on the Indiana side of the Ohio river in Louisville the difference between the 2 states throughout Covid has been jarring. Indiana remained mostly fully open while KY shutdown entirely restaurants for a long time. In Indiana nearly every independent restaurant I eat at survived. In KY many are out of business for good.

In most of Eastern KY the whole system is set up to get people on disability. It’s the only net inflow of money to the area. Most cities would be long gone if disability did not exist. The judges are all on on it. It’s basically the lifeblood of the local economy.

In Clay County where my family is from 3,041 adults are on SSI out of 13,000 adults that are not eligible for Social Security. So 23.4% of working age adults are on disability.

This is going on all over the country in rural America. This is why rural Americans vote Republican. They see the waste and fraud right in their face.

Most of my husband’s family is on some form of government aid. Disability, food assistance, all of it.

They all vote republican because other people don’t deserve handouts. They don’t see the hypocrisy in that. It’s infuriating.

my mothers boyfriend used to sit around and get drunk with his friends all day while the rest of us went to work. all his friends were on SSDI. They would all complain about democrats and how they hate them.

I showed my mother how to use the ACA loophole for early retirees to get insurance. She got a 12k annual subsidy to pay her premiums for 5 years. And still would complain about obamacare and dem handouts.

how people vote doesnt make sense a lot of the time. Perception <> reality.

Unemployment benefits are administered by the state.

That’s my whole point… Sounds like a KY problem if TN is doing so great (which according to Indy’s map, they’re not.) This guy is all over the place in the interview.

I think he is bemoaning the fact that KY is much more generous than TN because it has a Democrat for governor verses TN which has a Republican.

So, politics. Sounds about right. I didn’t realize that governors were so powerful. I guess I’ve been blaming my state legislature when really I should be blaming my governor.