Wife and I are not too enamored with Ken Jennings as host. I know there will be other hosts, but for now, it’s off the TiVo OnePass.
Also, I’m not sure what process is being used to weed out contestants, but they sure have had a lot of extremely confident wrong-answerers on recently.
I’d also like the clues to be a little less revealing and the game not to devolve into a “who’s the fastest button-pusher” contest.

Anywho, the recent five-time Jeopardy champion Brayden Smith, who cocked his head at an angle when answering nine Double-Jeopardy questions in a row, died, age 24. No cause noted as yet. 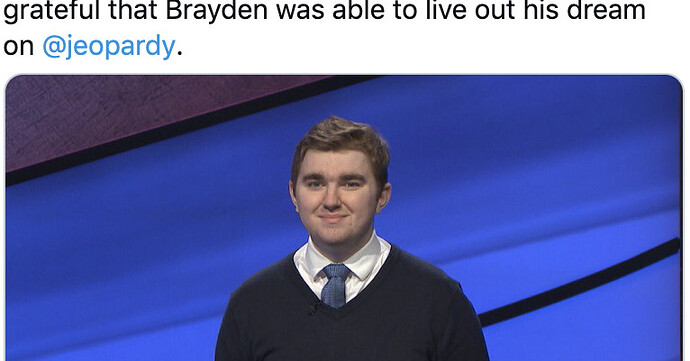 Brayden Smith, the ruthless "Jeopardy!" contestant Alex Trebek dubbed "Billy Buzzsaw" because of his ability to cut through his competition, has died. He was 24.

I was actually slightly impressed that Ken doesn’t seem to get himself into too many awkward silences.

I eagerly await my husband’s invitation to host.

We’re behind, so I haven’t watched the last maybe two weeks or so.

I’d much rather have Jennings than have it devolve into an excuse for the host to talk, like so many “game shows”. I liked Alex Trebek’s advice to Ken Jennings to remember that it is the contestants who are the real stars of Jeopardy.

I thought the guy (I forget his name; too lazy to look it up) did a great job the past two weeks.

I wouldn’t mind if he was the permanent guy.

Get ready for the celebrity hosts, though.

So Jeopardy! chose an insider in Executive Producer Michael Richards who was quickly canceled.

Now people are calling for Mayim Bialik to be canceled as well.

So will the new host be Ken Jennings or will they become diverse by choosing Levar Burton?

While I liked Jennings, he has a bit of a lisp which sometimes distorts sounds and causes me to note understand the clue as well as Alex would have pronounced it. I do have hearing loss so that has something to do with it as well.

I was also disappointed with Burton. I expected more life to his reading that I felt I got. But I’m sure it would get better with time. I’m actually rooting for Burton.

I’d rather have Burton do it as well. He just have to know that whatever his other gigs are, he won’t be available two days a week.
However, we stopped recording the show a few months ago. The guest hosts were just not getting it done. There is a cadence to the show, and Alex had honed it to perfection over the past several decades, AND he had game show host experience before. The new host will also have to develop a cadence that we all get used to.

I’m rooting for Levar as well, although I was underwhelmed by his first few days. He seemed genuinely surprised that the contestants knew answers. I assume that this something he could easily resolve.

Now people are calling for Mayim Bialik to be canceled as well .

ugh, I like Mayim Bialik. This cancelling of people for every small thing they say needs to stop.

I’m sometimes surprised when someone knows an answer (really obscure stuff, usually about art or lit, and only because I don’t know it), but I am more frequently surprised when all three don’t.

Jeopardy hasn’t been the same without Alex but have started watching again since Mattea Roach went on her winning streak. 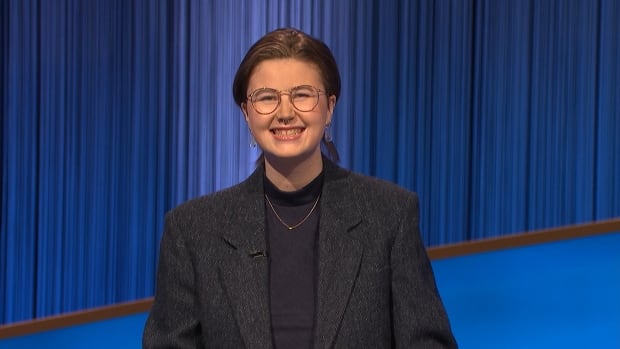 The Canadian champ secured her 23rd win on Thursday by answering the final question in the category of 20th century cinema. Roach’s 23-day winnings now total $560,983 US which is approximately $720,105 Cdn.