So I am a big sneakerhead. I love Nike sneakers. Last year it was nearly impossible to get anything. This year it’s an entirely different story. Nike made a ton of inventory to sell into the high demand they saw last year and they tried to increase prices on many of their most popular models. An example is Air Force 1’s were $100 last year, now the base models are $120 and the premium or fancy colorways are sometimes as high as $150. Nothing is selling out though and just browsing through their app ever couple days it’s been easy to see the last 4 or 5 months that inventory is piling up. They have 10-20 colorways of every model and you can get them in any size you want. Even Jordan’s are taking a week or two to sell out.

Anyway I have a list of shoes I like but I am waiting for the discounting which has started the last 2 months. But I have gotten into a habit now of waiting to see how low a shoe can go before buying it. I wonder how much of this is going on individually throughout the economy? How much of it needs to go on? This to me is the type of behavior that if it became widespread might actually lead to some deflation and get pricing back to pre-pandemic levels especially as the supply side is cleaning up.

On clothing I am still seeing more demand than pre-pandemic however. Discounting is occurring but things are moving at what I would term medium discounts and not deep discounts. I think that is a pretty healthy place to be for retail.

Decent article here on auto prices. It doesn’t look like there are any big price breaks on the horizon, but perhaps some cracks are starting to form. Anecdotally, I’m starting to wade into the car market, and while things are pretty crazy I have started noticing more price reductions lately for both new and used cars.

Article should not be paywalled. 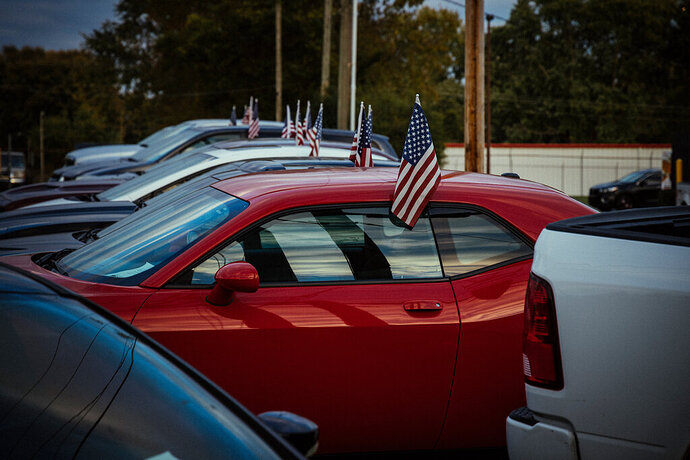 What’s Next for Profits? Cars Shed Light on a Key Inflation Question.

How easily companies give up swollen profits could determine how easily the Federal Reserve can cool inflation. Dealerships offer clues.

Honestly I think the Fed was right when they said inflation was transitory. I don’t think they understood how long transitory meant.

I think the corporate gods have spoken. The do not like paying people for work. Open the borders and kill the economy. We need boatloads of free labor for the rich to get richer.

It’s a question of which approach do you prefer when it comes to removing a band-aid?

Do we kill wealth now, or do we drown under inflation over the long term?

Lol at killing wealth. That’s not happening here. Nick is right. The intent is to put enough people out of work to get us at the brink of recession. They have pushed it too far and too fast imo.

if that’s what you took from this, you are the privileged and deserve to be wiped out

Open the borders and kill the economy. We need boatloads of free labor for the rich to get richer.

By open borders do you mean the granting of H-1B visas to skilled workers, or allowing those seeking asylum into the country. They would be generally working in occupations like cleaning homes, doing yard work, or mayber some construction. Major corporations are careful not to hire the undocumented. I don’t see how the later generally benefit the rich other than they can hire someone to clean their home and cut their grass for less than they would otherwise pay.

They’re saying it. We think the job market is too strong. There is no interest for the people in charge of the government to have a extremely strong labor market. Strong labor markets will by definition create core inflation because everyone can afford things. We did not freak out when policy over inflated the asset class because that benefits the privileged like me. Now they are attempting to destroy the ability for the middle and the bottom to earn wages and thus pay for stuff like clothing, food, and housing. Thus once this is over they will be begging for $10/hr jobs at Starbucks again so I (the privileged) can have a $2 coffee instead of a $3 coffee. It’s short sighted and if it works it’s going to bring about further discontent among the already angry masses. Unemployment at 3% with 4% inflation is better than 2% inflation with 5% unemployment IMO.

Amen.
But I think your drawing too direct a line between jobs and the low interest rates. There was a helluva lot of stock buybacks and increased dividends by corporations with the low cost of money. Liquidity was everywhere.

$3.5 Trillion of buybacks over the past 5 years

That would depend on wage growth. I’ll take the later with 3.5% wage growth every day of the week. Of course right now we have 3% unemployment, 5% wage growth and 8.5% inflation so… there’s that.

I don’t see anyone named Blue on my candidate list.

I think employers will catch up wages to inflation. There has been a question of how much is transitory vs permanant. That 5% might not be too far off what is permanant if the last two month over month prints continue.