Impacts to the Insurance Industry If Zombies Were a Real Thing

ETA:
Extracted posts from the RIP thread as it seems an interesting (and/or fun) "off-topic" discussion to pursue.

Woops - should have checked the date. This was 20 years ago. She’s still dead.

As opposed to zombie “left eye”? Yeah I suppose.

I mean I should have realized when it said she was 30? I’m like damn was she like 12 in TLC?

It would be bad news for life insurance… (and annuities)

I’m not too sure . . . once a person is proclaimed “dead” and the policy provisions are settled, the contract is completed.

Resurrection spells only restart the life, not any related contracts that are otherwise consummated at death.

Life insurance would probably be fine. Do annuity contracts use language like “while alive”? Cuz that could cause problems.

Could make the reopen experience on disability take a major turn for the worse, depending on how the contract was written.

Not sure zombies drive or need health insurance. They definitely aren’t going to use dental or eye coverage

They definitely aren’t going to use dental or eye coverage

Depends on the zombie. The chick in iZombie probably would have wanted them.

Lol. What a tangent from RIP. Only this crew could come up with it. Well done.

Only this crew could come up with it.

They definitely aren’t going to use dental or eye coverage

My kind of customer!

Would dismemberment coverage be more or less popular?

In one urban fantasy series that I enjoy, insurance has come up as a minor plot point a few times.

For example, life insurance as regards vampires has to differentiate between “first death” and “second death”. Coverage for vamps’ first death is seen as adding a little certainty to the various costs associated with their transition, and there is a fraud risk arising from those who might want to make that transition before time.

Property/casualty insurance adjusting factors into the plots of a few books (consider the risks involved in a world where magic exists…), and the woes of the protagonist maintaining health, car, and liability coverage are mentioned multiple times in the series.

Zombies aren’t really a thing in that series, however.

They need to add a witchcraft exclusion!

In that series, “witch” is actually a race, with magic being something taught/studied in school, and licensing in place for those who wish to profit from their talents.

The protagonist’s involvement in claims adjusting includes her rendering an opinion on whether certain property damage claims are legitimate accidents or intentional acts.

I believe “black magic” and demon summoning are mentioned as exclusions.

I think this would result in downward pressure on GL severity. What’s the worst that can happen if a zombie slips?

an even more slippery spot for other sloppers

I keep wanting to read this post as shown . . .

I think this would result in downward pressure on GL severity. What’s the worst that can happen if a zombie slips?

Can you imagine the liability exposure for failing to keep zombies out of your store, resulting in customers being attacked?

Thinking about it, insurance issues of the zombie apocalypse are mentioned in passing a few times in this series: 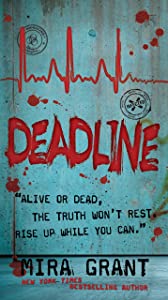 Visit Amazon's Newsflesh Page and shop for all Newsflesh books. Check out pictures, author information, and reviews of Newsflesh

BTW, keep the antivax conspiracy theorists away from this series. They don’t need more fuel for their nonsense.