It’s been rough. It’s about to get worse. So how do we get back on track? What’s the path to uniting the country now?

My own faith is fairly prescriptive on this. God will forgive any transgression. Hopefully, we can aspire to that.

But God only forgives those who repent and confess. No remorse, no forgiveness. I now hear talk of “no impeachment, let’s unite and heal.” But I don’t think we can skip the remorse part. It doesn’t work that way. If we just try and ignore it all, the bad feelings will simply fester and then explode. I has nothing to do with vengeance, it’s about healing.

The left can start by acknowledging the good things. Warp speed. No foreign wars. Offer the olive branch. That’s the path.

thanks for that warp speed or whatever donnie, however you FAILED to come up with a decent distribution plan, and flat out lied about having a stash put aside for a 2nd dose, thus states are now SCRAMBLING!

did i do that right?

Minus 10 points from Gryffindor for begging the question. Not all wounds heal - some kill.

I think we can either heal by fixing our education system, with a heavy dose of critical thinking and history as inoculation against demagoguery, and in the process make it illegal to whitewash our bloody record of atrocities against people of color so that white America can begin its long-overdue atonement; or we can hang the last Evangelical preacher using the entrails of the last Republican talk show host. That would be quicker but perhaps even more effective.

Frankly, I think we lack the political will to do either, hence: begging the question.

One thing we definitely DO NOT need to do is contort our minds and words further to placate Nazis by listing out all the “good things” that Retarded Hitler did in his four years. Failing to successfully burn the Reichstag last week does not count as an “accomplishment.” OP, please review the sacred scriptures of your religion, and note that when Jesus faced the Republicans of his day, he did not offer an olive branch. He offered the business end of a bullwhip. Let us go and do likewise.

I think the first post is a start. There is certainly a place for conservative views in the United States. I also agree that it needs to be quite clear that fascism in the clothing of white Christian Nationalism is not ok and honestly it’s not that conservative. Maybe letting people know that real conservativism involves freedom and liberty and enforcing people to live your culture is not really giving them much freedom or liberty. I am a pastor and I understand there is no reason for people who have no faith whatsoever to live under Christian morals. What happened to live and let live? I don’t understand why that concept is so hard to understand or to endorse.

So how do we get back on track? What’s the path to uniting the country now?

No definitive answers here yet, but an extremely important question.

Start with appreciating that this isn’t a fringe group. It’s like half the american population, and they’re disenfranchised - nobody seems to be addressing that. Instead they call them Nazis (which may be true, but it’s not a solution). The problem could more be described as cultural than just ‘some people’.

Maybe letting people know that real conservativism involves freedom and liberty and enforcing people to live your culture is not really giving them much freedom or liberty.

I’m not sure how you “let people know” that the Republican party is the diametric opposite of everything Jesus taught, short of re-education camps. People didn’t choose Trump because there was a dearth of good intelligence available on him.

UBI would also be a huge step in the right direction. Someone who is guaranteed enough money to live on will feel much less disenfranchised than somebody wrestling with entrenched generational poverty.

Overturning Citizens United and instituting a massive, massively graduated wealth tax would also do wonders, as far as disenfranchisement. Get money out of politics and make being a billionaire illegal. I think 99% of us would feel much more franchised if we accomplished those two things, and that should be true on both sides of the aisle.

UBI would also be a huge step in the right direction.

Canada can’t even get UBI implemented, there’s no way the US will do this :).

To echo my earlier disclaimer: if we limit our discussion to only things that we have the political will to accomplish, then I don’t think we do heal, short of another civil war.

Or a Watchmen-style giant squid dropped on NYC. But frankly, I don’t even think that would bring Trumpkins around, because it would be mostly democrats dying in that case. Maybe if it was dropped on Staten Island.

It’s like half the american population, and they’re disenfranchised

Do you mean Republicans? How are they disenfranchised? Their vote empirically and objectively counts more. In my entire lifetime, one Republican has won the popular vote, but they’ve won the presidential election three times. Biden won the same number of electors winning by 4.5% as Trump did losing by 2%. Over the last six years, Democrats have outvoted Republicans in Senate elections by about 25 million just to draw even.

And who is doing the disenfranchising? It might seem like ancient history right now, but we’re less than two weeks removed from over 100 GOP congresspeople attempting to overturn the results of a legitimate election by disenfranchising millions of opposition votes. They did this both before and after the GOP President riled up a murderous mob to storm the Capitol building and beat a police officer to death.

And that’s just the obvious stuff. There’s also run of the mill disenfranchisement like race based gerrymandering.

60% of Republicans still approve of Trump. 64% still think he won the election.

No healing can happen until these people rejoin objective reality.

Can the squid avoid my parents house though? Most of their neighbors are trumpkins and squid away there.

Do you mean Republicans? How are they disenfranchised?

Uh, no need to attack me, I’m not even american. Nevertheless, if they’re not disenfranchised, they FEEL disenfranchised. Even the woke in this thread don’t seem to understand that it’s like half the population that are standing behind trump. And the point here is, this isn’t a problem with ‘some people’ that you can ignore. The problem is far more fundamental than that.

And few if anybody seem to appreciate that. There’s 0 attempt to understand why half the population is going crazy right now. You’re not going to get a fix without understanding why they’re upset - people will just dismiss you which is pretty much what they’ve been doing for four years, and IMO a big part of the reason why trump got elected in the first place.

No healing can happen until these people rejoin objective reality.

That attitude won’t fix what’s broke. I don’t have a suggestion on what will work,but I wouldn’t be dismissive of why people feel like this, particularly when it’s basically ‘america’ we’re talking about here.

The scary thing is, trumpkins call the left “nazis”. The word nazi gets thrown around by both sides to label the other side.

And few if anybody seem to appreciate that. There’s 0 attempt to understand why half the population is going crazy right now. You’re not going to get a fix without understanding why they’re upset - people will just dismiss you which is pretty much what they’ve been doing for four years, and IMO a big part of the reason why trump got elected in the first place.

Honestly, some of them are just flat out crazy ( ie my aunt in-law). Certifiably crazy. There is no reasonable conversation to be had with her. She has been crazy before trump was in politics and she is a raving lunatic conspiracy theory racist trump supporter now.

What changes would you make to see that less people like your aunt go crazy in the future? Better education? More strenuous efforts to keep lead out of the water?

Idk take her internet away just like they did trump for one? She will still be insane, but insane without an army of enablers on facebook

My mother told my uncle that trump is a murderer and in response aunt in-law blocked her number. 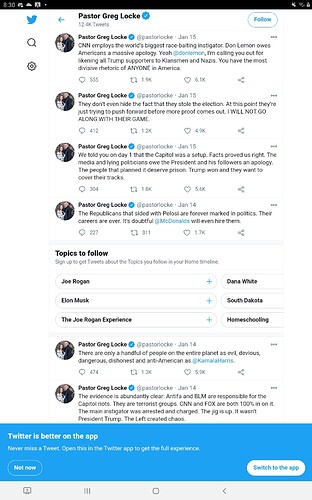 This is a local megachurch pastor with a congregation of thousands. If we hanged him for treason on the church’s campus and sent the church a bill for the rope, I think that would do a lot more than trying to “understand” why wolves exist, and why sheep love to be eaten.