How to cook brisket

So… I’m defrosting a 2 pound brisket. I’ve always cooked brisket the way my mother did, which is to braise it like stew. But my daughter doesn’t like that, and I know a lot of you like to cook meat dry. So… Recipes? What do you recommend?

Note that it’s winter and there’s a foot of snow on the ground, so I will be cooking in an oven, or on the stove, not on any sort of grill or anything smokey. Maybe that means I should just braise.

I’ve never cooked a brisket. I’d be asking YOU for how to cook it if I ever did.
That said, the internet has a lot of Texas-style stuff, but I found this: 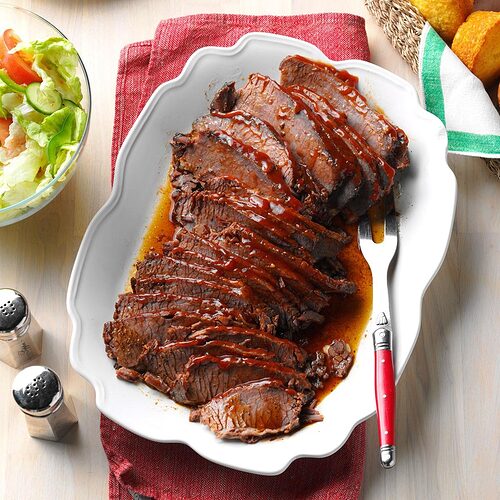 Texans like brisket cooked on the smoker, but this recipe offers convenient prep in the oven. Sometimes I make extra sauce to serve on the side. Round out the meal with potato salad and slaw. —Katie Ferrier, Houston, TX

I find it’s easier to have others perfect a recipe than my doing it. I have better things to do, and they’ve already done the work.
Oh, and if you don’t like a particular ingredient or don’t want to go out in the snow to buy, then don’t include it.

I generally make it in a slow cooker in a barbacoa style inside so I am no help. I did go to a wedding once where a friend married the daughter of an Argentinian immigrant. At the reception they served a roasted brisket her father made with chimichurri sauce that was one of the best beef dishes I have ever had. Unfortunately dad was too busy for everyone at the wedding to bug him for the recipe.

So… Adapted from the recipe Dr t non fan linked, hers what i did:

Puree onions
Add other marinade ingredients
Cut brisket to fit in a 9"x9” covered casserole.
Put in casserole fat side down
Smear marinade over top.
Flip brisket to put fat side up, and smosh the marinade around to make sure all the meat is covered.
Put lid on casserole and refrigerate overnight.

I’ll cook it tomorrow.
It’s an odd marinade, having neither oil nor acid. Usually I add either vinegar or lemon juice when I marinade. To be fair, the recipe he linked is actually a dry rub, but I didn’t have either onion salt or liquid smoke, so I decided to use some fresh onion. I do a lot of Indian dishes that start with a pureed onion as the base of a marinade.

We’ll see how it goes.

Wait, I’m having a stroke. NM.

When I cook my tri-tip (looks similar to brisket, but different part of cow), I marinade in 1/3 cup Balsamic, 1/3 cup Soy sauce, 5-second pour of WoosterChesterShire, some salt, pepper, paprika, garlic powder. Four hours or so. Then, sear both sides for 7 minutes, then indirect-and-covered (all on a grill, mind you) 250 to 300 degrees for 45-60 minutes until 125 degrees on the inside.

all on a grill, mind you

You know, these fancy grills y’all talk about are really just outdoor ovens. If you use direct heat, it comes from below instead of above, but for indirect heat I doubt they are very different. Well, except for the smoke. Smoke is something I can take or leave. That is, I enjoy it, but I also enjoy food that doesn’t taste smokey.

Sure, if you cook a piece of meat in a pan on a rack like you would in an oven, then indirect/direct doesn’t matter.
But I don’t do that with my tri-tip. It’s right on the rack.
And if you put a flame under a piece of meat on the rack, it will cook it, brown it, burn it. And I don’t want to do that for 45 minutes ('cause 7 minutes on high is, by my experience, plenty).
So, turn on the burners NOT under the meat, turn off the burners under meat, drop the lid, get a book, read.
I agree with the smoke, though. Salt&pepper is all a good piece of meat needs.

Naw, I wasn’t saying that it doesn’t matter whether you use indirect or direct heat. That certainly matters.

I was saying that if you use indirect heat, I don’t think there’s any difference between doing that on a grill or in an oven.

Puree onions
Add other marinade ingredients
Cut brisket to fit in a 9"x9” covered casserole.
Put in casserole fat side down
Smear marinade over top.
Flip brisket to put fat side up, and smosh the marinade around to make sure all the meat is covered.
Put lid on casserole and refrigerate overnight

Put in covered casserole in 350F oven for half an hour. Reduce heat to 190F and cook until temp reaches 185. By this point, the beef has shrunk and it’s sitting in a lot of onion soup.

Remove beef, put a couple of ramekins in the casserole, return the beef to the pan, above the onion soup, re-cover, and cook another… I dunno, maybe another hour. The temp stayed about the same.

Removed from oven, turn on the convection feature and heat to 400F. Put meat on a rack in a roasting pan and return to the oven for 15 minutes to dry and crisp the exterior.

Observations:
Way too much salt. The interior of the meat was okay, but the crispy bits of fat on the exterior are practically inedible.
I think the meat could have continued to cook at 190F for longer, and that would have gelatinized more connective tissue. But my family doesn’t like meat that falls apart, and this was decent.
The onion broth is delicious except for being over salted. I think I’ll freeze it until i have time to make some unsalted beef broth, then combine then with some toast and cheese and call it french onion soup. Too bad i don’t have suitable crocks to serve that in.

I may try it again with half as much salt and another hour of cook time.