Hometown International: What is Going on Here? 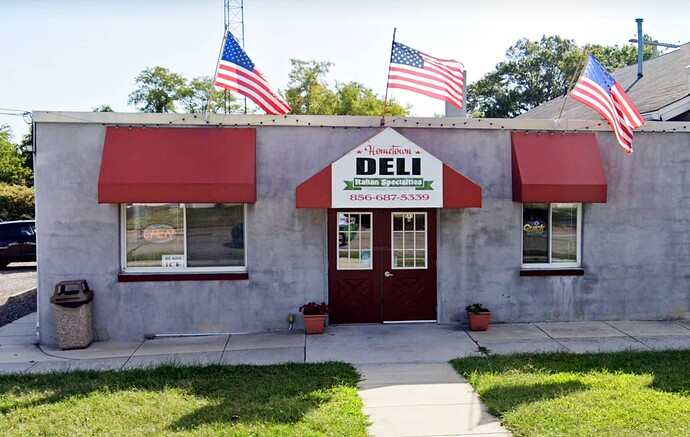 Hometown International has a market valuation of $100 million despite owning a single deli in southern New Jersey.

This makes even less sense than GME… why would a deli go public to begin with? [as in, a single deli. Not a chain.]

Other owners of Hometown shares include Blackwell Partners LLC, Series A, which has an address in Hong Kong; and two other Hong Kong entities, Star V Partners LLC, and Maso Capital Investments Limited.

Four other companies or entities listed as Hometown International share owners are based in Macau, China.

One of the Macau companies, VCH Limited, in May 2020 entered into a consulting agreement with Hometown International, the filing said.

“Pursuant to this agreement, VCH was engaged as a consultant to the Company, to, among other things, create and build a presence with high net worth and institutional investors,” Hometown said in its annual report.

“The term of the agreement is one year; provided, however, that each party has the right to terminate the agreement upon 30 days’ prior written notice to the other,” the report said.

I mean, if you were going to do some money laundering, wouldn’t you do it in private equity, not a publicly-traded company?

Just a deli going public is weird to begin with.

Just a deli going public is weird to begin with.

I wonder what kind of shells they’re making in that factory - probably steel, pheasant, buckshot, slug…just to name a few.

Anyway, as Einhorn says, the stock got as high as $14.50 on Feb. 8, for a market cap of $113 million. It closed last Thursday at $13.50, a market cap of about $105 million. These numbers are very high for a company that is, again, a single deli. But you shouldn’t take them too seriously. Over the 12 months ending last Thursday, Hometown traded an average of 331 shares per day, for an average value traded of about $3,900 per day. It would sometimes go for more than a week without any trades. This is a deli. Most of its stock seems to be held by a small group of people, and it trades in the over-the-counter market. It just seems unlikely that very many small investors were “sucked into” this situation. If they were, they put in a few hundred bucks.

But then Einhorn published his letter, and Hometown became the laughingstock of financial media last Friday. And here is what happened:

Last Wednesday, when there was a single trade of 200 shares and Hometown closed at $13.90, you might have asked incredulously, “who’s paying $13.90 per share for this deli,” but the answer would have been “exactly one person, for reasons of their own.” But on Friday there were hundreds of trades, and almost half a million dollars’ worth of stock changed hands. And the stock barely budged. People were like “yes, $100 million deli, absolutely, I want to buy that.” Hometown went from a thinly traded pink-sheet deli that nobody had heard of, to a company that everyone had heard of exclusively because it was a poster child for market excess, and … people … bought … it? Like, a whole new class of investors was introduced to Hometown International specifically by a hedge-fund letter saying “small investors who get sucked into these situations are likely to be harmed eventually,” and they looked at it and decided they wanted to be harmed. “Yes, step on my neck, Hometown International.”[3] David Einhorn warned people not to invest in Hometown International, even though it had never occurred to them to invest in Hometown International, but once they were warned not to they absolutely did.

Of course they did. Jeez, he must be new to this.

Key investor in $100 million NJ deli has a history of legal problems, ties to...

Hometown International, which owns just a small deli in New Jersey, is worth more than $100 million in stock and is traded under HWIN.

A key investor in the mysterious $100 million company that owns only a tiny New Jersey deli has a history of legal woes and ties to several people who have criminal convictions or have been sanctioned by regulators.

They include a lawyer, an accounting firm and a former stockbroker who have done work related to the company, Hometown International. They are linked to shareholder Peter Coker Sr., a 78-year-old North Carolina businessman.

Coker’s Hong Kong-based son, Peter Coker Jr., is chairman of Hometown International, whose Your Hometown Deli in Paulsboro, New Jersey, had sales of only about $35,000 in the past two years combined.

Hometown International Inc., the deli in Paulsboro, New Jersey, that is a $100 million public company for very perplexing reasons, had another good day yesterday. After trading 27,381 shares, total, from the beginning of 2021 until last Thursday, an average of just 353 shares per day, it traded 42,762 shares on Friday — after David Einhorn pointed to its valuation as an example of current market excess — and then 14,989 shares yesterday. It closed at $13.01, up slightly from Friday’s close of $12.99, down slightly from Thursday’s pre-Einhorn close of $13.50.

Last Thursday, the deli was a $100 million public company because you do that calculation by multiplying the number of shares outstanding by the most recent trading price of the stock, even if the stock barely trades; here, the “$100 million” number came from trades worth about $3,900 per day. But now it’s a bit more. Instead of trading a couple of thousand dollars’ worth of stock a day, it traded $212,799 worth of stock yesterday. Instead of getting its very high valuation from a tiny number of trades between, presumably, insiders, it has gotten a lot of public attention while pretty much keeping its valuation.

Actually I am sorry to tell you this, but the valuation is really much higher than that. From Hometown’s Form 10-K, filed last month:

The simple valuation math is that Hometown is worth $13.01 (yesterday’s closing price) times 7.8 million (the number of shares outstanding), or about $101 million. But ordinarily companies are valued based on their fully diluted equity value, taking into account stock options and warrants. Here, there are 7.8 million shares, but also an absurd 155.9 million warrants. That represents a fully diluted equity value of almost $1.9 billion.[1]

Hometown raised $2.5 million on April 14, 2020, by selling 2.5 million shares of stock (at a dollar each) to a few big investors in a private sale. The next day, it issued those warrants to all of its shareholders (including the new ones). As far as I can tell, the warrants do not trade with the stock. The result is that if an insider of Hometown sells you his stock, he keeps warrants to buy 20 times as much stock at way-below-market prices. “We have an aggregate of 155,940,080 warrants issued and outstanding which are all currently exercisable,” says the 10-K. “The future issuance of common stock will result in substantial dilution in the percentage of our common stock held by our then existing shareholders.” I don’t really know why a company would issue warrants for 20 times its outstanding shares. But it does have the result that, if the stock price gets high, insiders can sell their stock to outsiders at the new high price and then reload by buying lots more stock at low prices. And then sell it to outsiders again.

I do not want to give you investing advice, but I will say that if you went out and spent $100 million to buy all of the stock of Hometown International — which, again, is a deli — you would end up owning only about 5% of the company.[2] I … I would not personally do that trade? But obviously you do what you want. We are way past my ability to advise here. Look at me, doing math, like an absolute chump.