maybe, but I do think of them as different. we have options for alternate shopping and shopping isn’t referred to as a way to build lasting wealth that can persist to your heirs. (of course, that long term appreciation depends by location)

I think that mom and pop stores are (were) a way to pass on wealth, not unlike owning several properties.

Mom and pop stores are just a crappier way to do it.

In Germany the homeownership rate is about 50% and they do pretty fine. It’s a very Anglo-saxon thing to incentivize homeownership to the time of degree we do in the US. 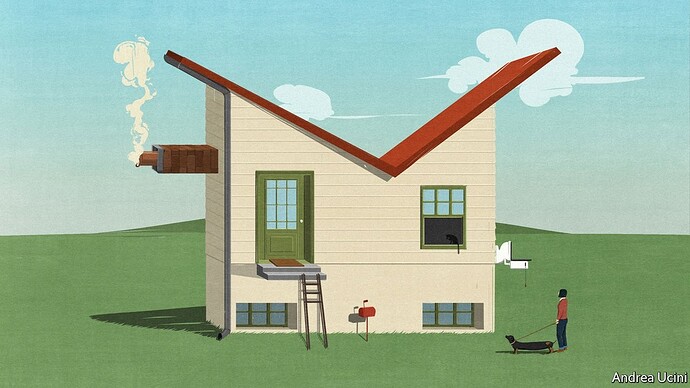 It is an obsession that undermines growth, fairness and public faith in capitalism

“Most important, in a few places the rate of home ownership is low and no one bats an eyelid. It is just 50% in Germany, which has a rental sector that encourages long-term tenancies and provides clear and enforceable rights for renters. With ample supply and few tax breaks or subsidies for owner-occupiers, home ownership is far less alluring and the political clout of nimbys is muted. Despite strong recent growth in some cities, Germany’s real house prices are, on average, no higher than they were in 1980.”

Looked to be a good article but was behind a paywall.

Ample supply of what? Rentals? I think that varies by location. Berlin area is a tough market. I don’t know about the German market overall, but I would be interested in demographic trends/land availability/history. Have rents on average remained the same as 1980 in real terms?

Housing units I believe, but I’m merely quoting in the quote of mine that you reference.

The primary method is 401ks, but that’s besides the point. It’s unsustainable to use housing as a wealth generator. Unless you don’t see any problems with our current housing situation.

It’s unsustainable to use housing as a wealth generator. Unless you don’t see any problems with our current housing situation.

Not sure that “unsustainable” is the correct term. Owning real estate has been part of wealth creation for a very, very long time.

And the key to real estate generating wealth isn’t in those short-terms shifts; it’s the long term impact. Owning property for 10 or more years is very likely to result in its value being higher when sold than when purchased by a fair margin.

But I agree that most overlook the interest paid on the mortgage in terms of assess the cost to purchase/own.

Not sure that “unsustainable” is the correct term. Owning real estate has been part of wealth creation for a very, very long time

Owning a personal home that the owner purchased has been a part of wealth creation of a very very long time? I’m sure it’s always been the case for some percentage of people, but I don’t think that history goes back very far for the majority of people.

It also requires older generations to extract that wealth from younger generations. It’s almost a Ponzi scheme at this point. This is a bad system.

Interest is the part of the mortgage that is rent.

The idea of using homeownership as a wealth building tool is bad (at least in the context of having property values grow faster than inflation). It simply results in sucking money out of younger generations and passing it to older generations. Eventually that results in bankrupting the youngest generation.

all forms of speculative investment is sucking money from someone else. you’d have to invest in manufacturing to have a win-win situation

Commercial homeownership is not much different from insurance in some ways.

You buy a house or four, rent them, you expect to profit, sometimes you lose out and send them to collections and make a portion of what you anticipated.

That happens enough, raise rent. Then buy another few houses. Continue. Buy as many houses as you can.

Difference is that insurance is mostly fungible. I get mad at State Farm, I quote at Progressive. I can’t in 15 minutes switch my house.

So we’re stuck in a system where corporations are increasingly gobbling up what used to be privately-owned residences and turning a profit on them to buy more. Or turning them into AirBnB, so people aren’t even living in that society, they just drop by to sightsee and leave, lowering city income tax.

Not sure how common this is. According to this only 17 states permit cities to levy income taxes.

Owning a personal home that the owner purchased has been a part of wealth creation of a very very long time?

Owning land. And the value you can extract from that ownership.

More recently, that’s been in the direction of “housing” . . . whether for yourself or for tenants (or both).

Other uses have been for business . . . whether for yourself for for tenants (or both). In some cases, agriculture. In others, retail, services, or manufacturing. In some infrequent cases, tourism.

And then there’s “advertising” and incidental uses. Consider billboards and windmills. These businesses retain ownership of their billboard/windmill, but rent the land upon which they’re located.

FWIW, I’m not disagreeing with your other statements. I was pushing back on the statement of “sustainability” given that there’s a very long history of land ownership as a means to build wealth. And I don’t see that changing in the near future . . . now who will be building wealth from that ownership might be changing. (Or perhaps you’re focused on this latter part and I missed that?)

Or turning them into AirBnB, so people aren’t even living in that society, they just drop by to sightsee and leave, lowering city income tax.

I also have an issue with AirBnB. They have essentially created a bunch of hotels on property that is zoned for residential use.

FWIW, I’m not disagreeing with your other statements. I was pushing back on the statement of “sustainability” given that there’s a very long history of land ownership as a means to build wealth

Certainly, owning property has led to wealth generation. The problem is that for centuries this option was limited to a very select group of members in society. Now we are trying to use homeownership as a wealth generation tool for the majority of people. So to be more specific, my claim is that owning a home to create wealth for the majority of Americans isn’t a sustainable path.

we’re stuck in a system where corporations are increasingly gobbling up what used to be privately-owned residences and turning a profit on them to buy more.

Yeah, so here’s my Dad’s experience in a nutshell. He owned an apartment building (I think around 45 units) with a working class clientele. 2 bedroom apartments rented for around $675 a month… more or less depending on the exact floor plan and condition. Reasonably safe area. Some highway noise, but not too bad. Lot of single parents and younger couples. 15 minute commute to several larger blue collar employers.

The next building over has a lot of section 8 tenants and isn’t nearly as nice as my Dad’s. And their dumpster was right on the property line. So sometimes they’d throw trash in the general direction of the dumpster and it would land on my Dad’s property. Sometimes they’d leave the lid open and trash would blow out of the dumpster onto his property. My Dad was paying one of the tenants to go around and pick up trash twice a week and it seemed to my Dad like the tenant was doing a decent job.

But the city came and fined him $2,500 for having trash in the yard. Apartments are uninhabitable if there’s trash in the yard. My Dad gets the tenant to start picking up the trash every day. Tenant is out of work and only too happy to get (2/7)^-1 of his prior pay.

He’s now been fined $10,000 in under a month and he’s paying to have the trash in the yard picked up every single day which is also increasing his costs, albeit less than $10,000 in fines. This is eating up 1/3 of his top line, which is more than 100% of his bottom line.

So he sells the building. To a big corporation who has high powered attorneys who can deal with the city. And they are currently in the process of evicting all of my Dad’s tenants and they’re going to gut the place and turn them into luxury units that rent for $1,600 a month or more. Which obviously the prior tenants won’t be able to afford.

So, yeah, it’s a problem. But to quote Ronald Reagan… “government isn’t the solution to the problem… government IS the problem.”

At least in that case.

in your dad’s case, your dad isn’t communicating the source of the trash to the city or defending himself at all? the city is applying the fine as the conditions warrant. i don’t know if i could call that “the govt is the problem.”

related but different direction, and only an observation
i have seen a property with 700 units (and over 2000 residents) flip ownership, get upgrades, and with rent increases and new terms get all new tenants. it was ugly for the city in one way, and “great” in another.

Yes’n’no. Government was your problem, however, the increasing conglomerates which to make it worse are often owned or financed from foreign countries have been driving up the cost of rent for everybody. Without the government doing something I don’t see this getting better in the next 5 years… possibly cooling off over the next 10-20 as Boomers die or go to retirement homes. I think we’ll see a lot of younger Millennials/Gen Z in 1950s homes before long. I’ve already seen it happening.