I think I’m going to get a home gym, no more asking to work in or waking up at 4 or going at midnight when it’s not crowded!

I’m settled on most of the things I wanna buy, only thing I’m debating on is whether or not I want a half rack or just a squat stand with a separate dip/pull up station.

I have an 8 ft ceiling, so a half rack will barely fit but it should. If I put the pull up bar one hole lower than the top I think I can do pull ups too. I dunno about attaching a dip accessory though because I’m worried about how sturdy it’s gonna be. If it’s wobbly maybe it’s better to just go with a squat stand instead of a rack and have a separate dedicated dip station for that.

The stuff I am settled on is all cool stuff. A nice barbell + training plates.

Should be around $4K or so, below is the list with the squat/stand dip station combo but a half rack instead will be a couple hundred more I think: 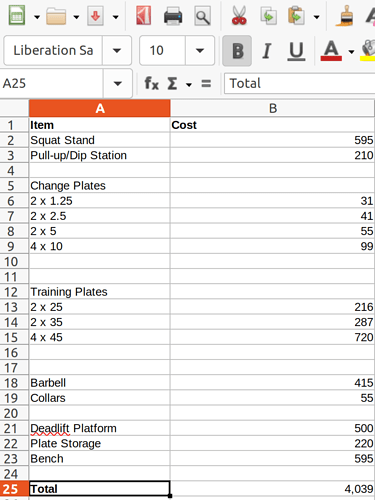 @colonelsmoothie Have you purchased yet? I have a full cage that I -think- will fit an 8 foot ceiling. At least if you invert the chin-up bar to go downward instead of upward, which I did in our last residence. Easy transition between squat and bench heights, safety bars, all the things. Am very happy with it and it only cost something like $1,500 all-in including bar and plates. I could measure it and remember the model if you want, it’s probably still for sale, or something similar.

Yeah, I bought the Rogue HR2 and it fits an 8 foot ceiling. I also have it placed on top of my deadlift platform and it still fits. I put the chin up bar 2 slots below the highest setting.

One thing that I was unhappy with was the barbell and plates. They made A LOT of noise. I did not know ribbed sleeves were a thing and at first I thought the only thing I had to worry about was the sound the plates made when they hit the floor.

But the loudest noise was actually just putting the weights on the bar (ZZZZZZIPPPP). It’s a studio apartment that I converted to a gym so I can’t have the neighbors hearing it.

I bought another barbell from American Barbell with smooth sleeves and then bumper plates from Rogue with smooth inserts and the noise problem has been solved. But I don’t know what to do with the extra $2k in gear that I won’t be using. Returning it would be a real pain in the ass so hopefully I can sell it to someone local.

Here it is. It’s been updated a few times but this is what it looked like when I first put it together: 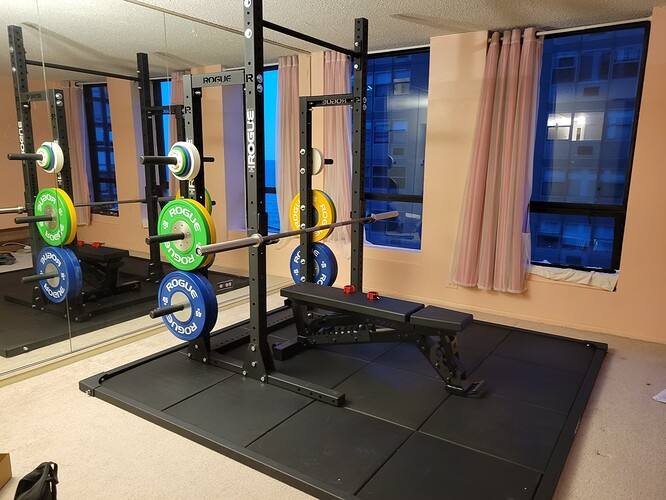 Are you number-blind or something?

No safety drop for your chest press.
No safety bars for Squats.
Yet worried about COVID.

But where’s the kitchen?

I have safeties, they just aren’t in the picture

It’s behind where I was standing.