Has a book ever cheated on you?

Inspired by this quote. Got me thinking

Snow In August - Pete Hamill - I really loved this book, 95% of the way through, then a terrible cop out of a fantasy ending, just ruined it for me

The only other book I read by his was Forever, which sort of became the concept for a movie and a TV series, but not really. Intersting read

Anyway, what books cheated on you? Your own definition.

Another one: a Casual Vacancy (by J.K. Rowling) – when I got to the ending, I thought it was so cheap I threw the book across the room.

This is one of the downsides of e-books. I can’t abuse the book the way it abused me.

The Dark Tower Series, which is 7 books and goes 3 books too long. I started it when I was young and foolish, and really liked how it just opened into one mystery after another.

Until it suddenly stopped, and author vaguely attempted to tie everything together with a perfectly dumb meta-explanation, and ended with an apology for his crappy ending. 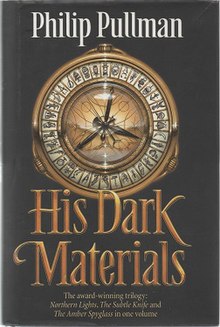 His Dark Materials is a trilogy of fantasy novels by Philip Pullman consisting of Northern Lights (1995; published as The Golden Compass in North America), The Subtle Knife (1997), and The Amber Spyglass (2000). It follows the coming of age of two children, Lyra Belacqua and Will Parry, as they wander through a series of parallel universes. The novels have won a number of awards, including the Carnegie Medal in 1995 for Northern Lights and the 2001 Whitbread Book of the Year for The Amber Spyg...

What a GREAT start, and what a disappointing ending.

“The Murder of Roger Ackroyd” by Agatha Christie.

But it’s a good cheat, imo
“The Silent Patient” was an interesting cheat.

I thought “Where The Crawdads Sing” was a cheat, not as a good of one.

“Us Against You” was a great read – the author has a way to tease every chapter ending to keep you reading – until the end. You know those superhero movies where in the end the hero has some superpower he/she/it didn’t know existed and voila! “problem solved”? In this book, the author finds his superpower, “Oh, I can write anything in order to end this book? Voila!”

Where The Crawdads Sing

Interesting, that has been recommended to me

I thought “Where The Crawdads Sing” was a cheat.

I recommend borrowing it from someone.

I rarely buy books. Most everything I read is via the library.

I understood it better as an adult, but didn’t like it much. It’s technically well written. But it’s about a bunch of unpleasant people that i don’t have much in common with.

I thought “Where The Crawdads Sing” was a cheat.

Same! I thought I was the only one who hated it. It was a popular book club book and everyone was raving about it. Looked at me like I stabbed a puppy when I said I didn’t like it.

Even when I didn’t pay for a book with money, if I spent the time reading it, I paid attention.

So I can still feel cheated.

I didn’t actually feel cheated by War & Peace, I just wanted every character except for Pierre to die. It was my own fault for not checking that the bit where Napoleon invades Russia wasn’t til almost the end.

I read the frickin book because of this damn chart:

They made us read mainly crap in high school. What’s up with that shit?

Okay, it was the good end of crap (after all, we weren’t reading Danielle Steele), but holy hell I’ve hated so many books because I was forced to read them as a teen.

The only things I enjoyed in high school I was forced to read in literature classes:

The one author I finally gave a fair shake when I got older:

(I did not like Dickens when I was in K-12, except for A Christmas Carol - the original text, not adaptations of various movie versions)

Maybe when I’m 70 or something I can attempt some of the authors again, like Hemingway or Hawthorne (ugh) or Henry James (BLECH). Or maybe I’ll learn to read Dante in the original.

Sorry, William Golding, I plan on never reading Lord of the Flies again.

And let us not speak of Catcher in the Rye.
What the hell was that shit? I’d rather read Faulkner again.

one leave one, etc

Even when I didn’t pay for a book with money, if I spent the time reading it, I paid attention

I was just responding to dtnf, to borrow it

Sword of Truth series by Terry Goodkind. Series not only went on for too long, but I thought the ending was a cop-out and stupid.

Another book that I hated was “The Da Vinci Code”. I found it about as compelling as a Scooby Doo episode.

I also get irritated when Leonardo is referred to as Da Vinci. That’s not his name!!! If you’re referencing him in the title of a book - respect the genius - and know his name!!!

And let us not speak of Catcher in the Rye.

I thought Catcher was okay. Not “everyone must read this” okay. Just ordinary okay. It’s different, at least.

Same. I thought Catcher was just okay.
I liked a few of his “9 Short Stories” better.