A reminder that MLK wasn’t well liked during his lifetime: 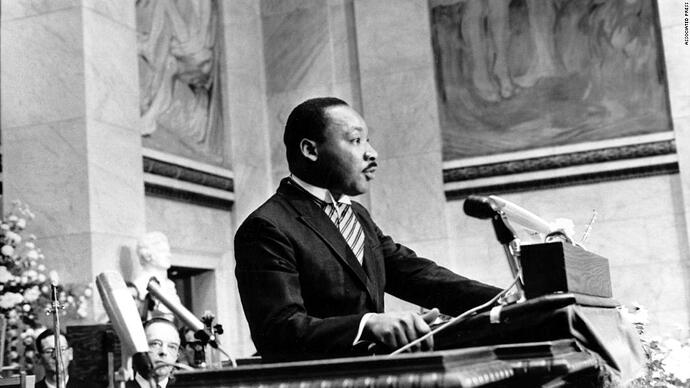 Americans see Martin Luther King Jr. as a hero now, but that wasn't the case...

The fact that King is now beloved and has a national holiday commemorating his birthday wasn't something that obviously was going to happen during his lifetime... During the 1960s, King was a very divisive figure.

One part of this article I found interesting:
"In 2011, 94% of Americans had a favorable view of him in Gallup polling. This included an 89% favorable rating among those ages 65 and older. The vast majority of whom were born in 1927 or later. Among that same group in 1966, King’s favorable rating was 41%.

In other words, King’s now uniform popularity isn’t only because older generations died out. People’s minds changed. King became a lot more popular among many people who didn’t like him when he was alive."

Yep, he stirred up a lot of trouble back in the day. And it’s easy to see in hindsight that he was on the side of justice, but that was less clear to most white people at the time, when he was encouraging his followers to break laws. And breaking them himself.

One mid-January day many moons ago, near MLK Day, I was substitute teaching for a high school English teacher. The assigned reading that we did in class and discussed was excerpts from both Antigone and I Have A Dream. Which at first struck me as an odd combination until I realized that the whole point of both was distinguishing between just laws and unjust laws, and that we have a duty to fight unjust laws. A good lesson.

when he was encouraging his followers to break laws. And breaking them himself.

Did he encourage his followers to break any laws that weren’t either Jim Crow or in clear violation of their Constitutional right to protest?

I don’t think so. That was kind of my point in bringing up the just law vs unjust law distinction.

Makes sense, I sort of sum up in my mind MLK vs Malcolm X as whether or not they were breaking laws that were in clear violation to their Constitutional rights, or just breaking laws