Splitting this off from the “News that makes you say WTF?!?!” thread.

A condo has collapsed in FL, seemingly out of the blue. At least 50 people are unaccounted for. 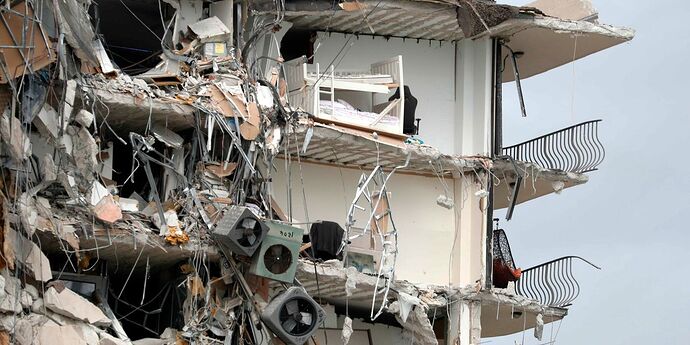 A portion of a condo tower in the Miami-area beachfront town of Surfside collapsed, killing at least one person and triggering a painstaking search for survivors in the rubble. There were at least 99 people unaccounted for.

Emergency responders were combing through twisted shards of metal, dust of pulverized concrete and furniture fragments for at least 99 people who were unaccounted for after part of a condo tower in the Miami-area beachfront town collapsed.

Local authorities said it was too soon to know what caused the 12-story, 40-year-old building to crumble in a roar Thursday, killing at least one person and likely dozens more. Miami-Dade Police Department Director Alfredo Ramirez III said his detectives along with state and federal officials will conduct an investigation into structural issues once rescue operations are complete.

Florida buildings are required to be recertified for electrical and structural safety after 40 years, and the building had begun that process, said Walter Keller, a civil engineer and the town’s consultant planner. Neighbors said buildings need to reinforce the concrete facades frequently to withstand the corrosive effects of seawater.

At least one resident of the complex had complained that the homeowners’ association failed to repair damages to cracked building walls, court records show. Work was being done on its roof, and building inspectors had visited the tower recently, said Surfside Commissioner Eliana Salzhauer.

I added emphasis, of course.

Florida International University professor Shimon Wdowinski conducted a 2020 coastal study that looked at satellite data from the 1990s in Miami Beach and Surfside. In addition to the typical sinkage that he expected on the western side of the barrier island, where single-family homes were built on reclaimed wetlands, the condo building that collapsed also showed an unusual amount of sinkage. The data didn’t detect any other buildings with this kind of subsidence issue.

“It doesn’t mean that the ground is moving,” said Prof. Wdowinski. “It could be that the building itself has some structural damage.”

One bit that we were commenting on, especially comments from @twig93, had to do with the number of missing people, and why they don’t necessarily know if people were there or not: 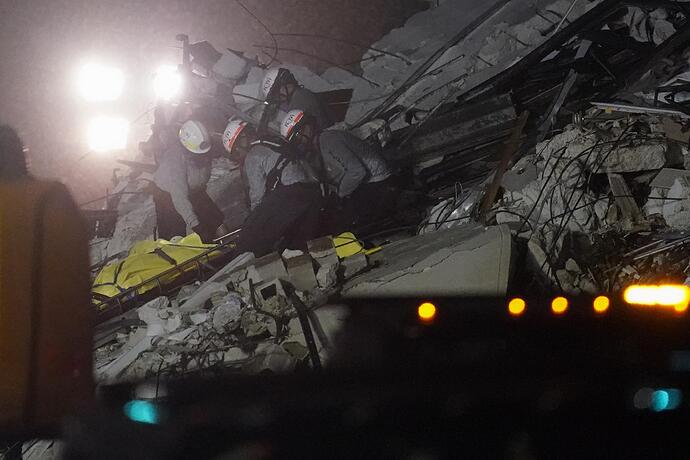 SURFSIDE, Fla. (AP) — About 160 people were still unaccounted for Friday a day after an oceanside condominium building collapsed into a pile of rubble, and searchers combing through a twisted, shifting pile of concrete and metal feared the death toll...

About half the building’s roughly 130 units were affected, and rescuers pulled at least 35 people from the wreckage in the first hours after the collapse. But with 159 still unaccounted for, work could go on for days.

Raide Jadallah, an assistant Miami-Dade County fire chief, said that while listening devices placed on and in the wreckage had picked up no voices, they had detected possible banging noises, giving rescuers hope some are alive. Rescuers were tunneling into the wreckage from below, going through the building’s underground parking garage.

The thing is that the condos were vacation homes for some people, and you don’t know if they were there or at a different residence. Or if there were other people staying in the condos (airBnB, etc.)

Thanks MPC. I’ll mention that the gist of my response to you in the other thread, about the list of residents being saved to the cloud, was to say that this is an HOA comprised of volunteers, not a sophisticated billion-dollar company with a dedicated IT staff.

Also, it is my understanding that the building had a mix of permanent residents and snowbirds and people who just used it as a vacation home.

I have not seen any indication of whether any units were used as Airbnb or similar. My former condo did not allow it, and with a doorman it would’ve been pretty hard to skirt the rules. But no clue about this building.

Having been on a co-op board in Queens, where we didn’t allow subletting at all, I would not be surprised if they kept all the records on paper, and in their office, which may have been part of the collapse.

But even if they did have an electronic record, they wouldn’t necessarily have known how many people were in the building.

(and yes, some people do Airbnb where they’re not supposed to…we got illegal subletting in our co-op a few times.)

Comments from a friend who works in construction:

I will speculate that rebar corrosion is a likely cause. If rebar has rust before concrete is poured, the rebar will continue to corrode inside concrete. Current codes require rebar to be coated with an anti corrosive coating to prevent long term failure. Inadequate footings are another possible cause in loose sandy soil with salt water exposure. Horrific in any event.

…
Fiber mesh is an excellent choice for concrete reinforcement. We were using it frequently back in the 80s for slabs less than 4" thick. In general, 2" of concrete is a minimum embedment for rebar. I’ve seen slabs crack over the rebar lattice where the rebar was too close to the surface.

(and yes, some people do Airbnb where they’re not supposed to…we got illegal subletting in our co-op a few times.)

A lawsuit was filed yesterday against the condo board. 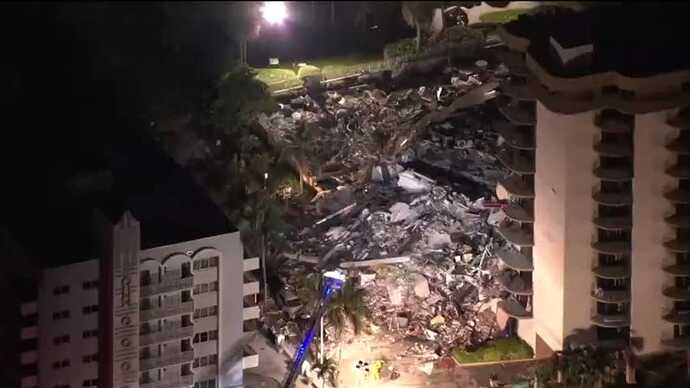 A lawsuit has been filed after the Champlain Towers South condominium in Surfside, Florida partially collapsed Thursday morning.

They could still pull survivors out of the rubble, and they can be the first to tell them “a lawsuit has already been filed on your behalf.”

Yeah, I think the doorman makes it pretty hard to Airbnb or even illegally sublet. Although if you claimed that you were living there with your “roommate” (sub letter) then you’d be more likely to get away with it for a while until the doormen all compared notes that they never saw you around, despite seeing your roommate a lot.

Airbnb would be near impossible. An informal “sure you can stay at my condo for a week while I’m on vacation” with your friends would work, but not Airbnb strangers.

I think having a doorman would dissuade people from even trying to pull any of this off.

It appears there is (was) parking under the building. No evidence for the following, just conjecture on my part. You generally don’t expect high speed impacts in tight parking garages, but I wonder if a collision with a post, especially one already weakened by exposure to harsh conditions, could be the initiating event.

The rebar was the issue in my building too. They said that there was minimal rusting so far but it would keep rusting… I think. Been several years now and I don’t recall precisely.

I wonder if a collision with a post, especially one already weakened

Yeah, this could have been a contributing factor. Late at night someone might have been coming home drunk, although it was the middle of the week. Possibly just tired.

There should be enough redundancy that taking out one post wouldn’t cause the whole building to just collapse. But if multiple posts were already weakened and in need of repair then perhaps the redundancy designed into the structure had disappeared due to neglect.

For a cause: I’m thinking sinking ground underneath. Many of Florida’s high-rises should be concerned.
You’d need a lot more force to affect a post. Imagine the damage to the car, and understand that all that damage was NOT inflicted on the post.
So, armored car, or tank, sure, that might cause some post damage.

I have read that they are already blaming global warming, sea level rise, and subsequent erosion.

On occasion, 18 wheelers have knocked bridges over the interstate down, but that is a lot more mass and a lot higher speed. Just something to wonder about (and car insurers to fret about).

Now there are reports coming out that a structural engineer made a report in 2018 that there was major structural damage to the concrete structural slab due to failed waterproofing and improper design allowing water to pond. Cracking of concrete columns, exposed and deteriorated rebar,… 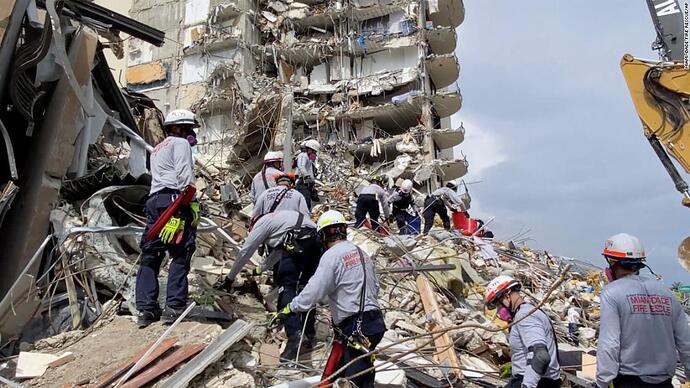 Search and rescue efforts continue a day after a building in Surfside, Florida, partially collapsed. Follow here for the latest.

Was this a doorman building?

a structural engineer made a report in 2018 that there was major structural damage to the concrete structural slab due to failed waterproofing and improper design allowing water to pond. Cracking of concrete columns, exposed and deteriorated rebar,…

This sounds eerily similar to my former home… except at great expense we/they did something about it before the building collapsed.

My recollection is that the price tag was around $15 million, plus the cost of completely redoing the landscaping / concrete around the building that would be torn up which added a 7 figure amount to the total.

This building appears to be situated on a larger slab with fewer units to split the cost. A possibly mitigating factor is that with fewer stories / less weight per square foot of slab, possibly the replacement cost per square foot might have been lower??? IANAStructural Engineer.

It will be interesting to read through the minutes of the board meetings to see what the HOA did with the report. Were they actively saving up to get the work done as soon as possible or were they saying “engineer schmengineer… the building probably won’t collapse, so screw it.”

Evidently lots of water coming into the condos from windows/patios, problems with garage supports.

also, got this from reddit, this channel has been covering the issue from some people who have done engineering in Florida real estate:

Two videos on the disaster up so far, and one to drop in a few hours:

It will be interesting to read through the minutes of the board meetings to see what the HOA did with the report.

Depending on the backup practices of whoever kept those minutes, they may have been destroyed along with the building. Some survivors might know, though.