We need a place to put political stuff that’s not about Trump.

In the Supreme Court’s first ruling on abortion since the arrival of Justice Amy Coney Barrett, the court on Tuesday reinstated a federal requirement that women seeking to end their pregnancies using medications pick up a pill in person from a hospital or medical office.

The court’s brief order was unsigned, and the three more liberal justices dissented.

Probably a sign of things to come. Roberts explained his vote, the other 5 did not. 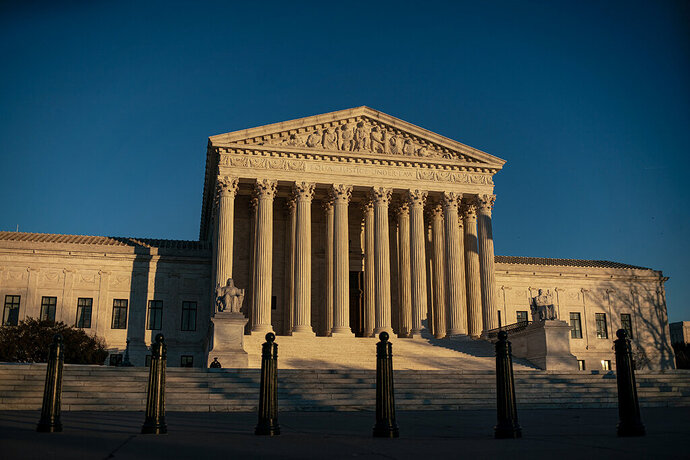 In their first abortion case since Justice Amy Coney Barrett joined the court, the justices reinstated a requirement that women seeking medication abortions pick up a pill in person.

This is such a dumb argument. How is somebody safer if they pick up a prescription in person compared to receiving it in the mail?

Or at a pharmacy. Yeah, this is astonishingly dumb.

Did the Supremes just accept some state law, or make up that rule themselves?

Uh, that’s the whole “political topics”. I suggest you pick a more descriptive title for this abortion thread than “meanwhile”, however.

I skimmed the opinions late last night. If I recall they basically defaulted to the FDA request without considering the legitimacy of the request. Or something like that. So the fact that there is no logical reason for this rule didn’t matter.

I thought this wouldn’t generate much discussion, so didn’t want an entire thread. I thought there might be others like this. But, I changed the title.

They accepted an FDA requirement for picking up the drug in person.
A lower court had granted an injunction, blocking the FDA rule and allowing remote sales.
The SC granted a “stay” on the injunction, accepting the FDA rule, pending a regular court case.

Roberts said “we should trust the experts on the FDA”. Sotomayor and Kagan said “Doesn’t make any sense from the supposed experts”.

(Their reference is picking it up at a clinic. I don’t know enough to say whether it is available at regular pharmacies or not.)

Where are states’ rights when you need them?

What they actually did: Remove an injunction applied by a lower court that stopped a requirement already in place while a full trial took place. Asking that the final ruling be applied after regular court process. (Stopping an activist lower court.)

What they actually did: Remove an injunction applied by a lower court that stopped a requirement already in place while a full trial took place. Asking that the final ruling be applied after regular court process. (Stopping an activist lower court.)

Yeah, I don’t see this as one to get anyone’s britches in a bunch. That is happens every time abortion is on the docket though. It’s the single most divisive issue there is.

So, what I gather is that Biden’s FDA could easily overturn this with a mere policy change.