OK, so Group Stage is over, QF’s begin today, they’re on ESPN, so they’re actually being shown on the TV, which is more than I can say about the CONCACAF W. (Yeah, the Final was on a Spanish station.)

Now, there’s always something to complain about even for one of the world’s best teams.
But, yeah, if they want to be better than the USA, they’re gonna have to find the hidden talents. I recall the USWNT being quite white for a long time. 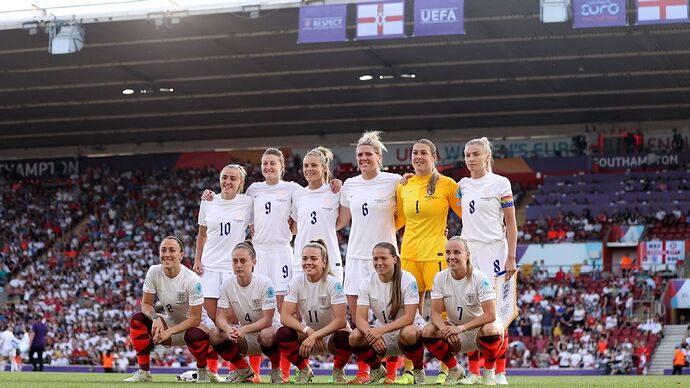 Does England's Euro 2022 squad have a diversity issue?

The Euro 2022 hosts have been superb, but concerns are being raised about the lack of diversity in the team, something the FA is trying to tackle.

I mean, if diversity is important, need to start at the beginning. later in the article, it points out that there are efforts to “diversify” but the goal really should be to find the best players at early ages and train them. The first part of that basically involves giving everyone a chance to play, and working from a larger base, it should be a little easier to figure it out from there.

The lack of non-white faces on England’s women’s team is surprising. Have to think they would be a stronger team drawing more on other communities. I assumed they had progressed since Bend It Like Beckham.

I assumed they had progressed since Bend It Like Beckham.

Well, it doesn’t seem as if they did this on purpose. Some of the G/W academies moved from the cities to the countryside. To consciously get away from the “foreigners”? No, the land is cheaper than expanding in the city. But that was the result.

From being a sport that grew organically within local communities in England and had a pathway to local teams – England’s all-time leading appearance holder, Fara Williams, was famously spotted playing in a ball court in Battersea, London – the women’s game has become detached from its working-class, “everyone’s welcome” origins and, at times, accessible only to those young girls with the family network and financial means to be able to do so.

Also, in an attempt to upgrade the level of their facilities, clubs took themselves out of more urban, inner-city areas, where most women’s clubs were formed and based, to the leafier suburbs, which again provided a challenge for young girls to actually access those facilities.

Oh, and G/W still pay to play, while the B/M don’t. That is probably the biggest hurdle.

"Girls still have to pay to play in the Academy system, but boys are actually paid to do so, and they’re often ferried to and from training by the clubs. There isn’t the resource in the women’s game to do that.

The goal that put England up 3-0 on Sweden.

As I said in the US Soccer thread, I think England is the team that the US women should be most concerned about in next year’s World Cup. The amount of their improvement over the past year has been amazing to watch.

GER-FRA was a treat to watch.
All these teams are so much better than the CONCACAF competition below CAN.

GER still not scored upon by the opposition. (FRA’s goal was declared an Own Goal, rebounding off the post then off the back of the Goalkeeper.)

England looks like it’s on another level right now, though. Its play in the final third is lethal, the kind of play you expect out of a top-rated men’s side, and it’s been building toward this for a while. WC2023 is a year away, time for current form to fade, but England go in as the favorites if they win this tournament.

It only means handing Germany its first loss in a Euro final. I think it’s doable, especially playing at home.

I think England is realistically the only W team with a good shot at beating the US in the 2023 World Cup. That would be an exciting final.

They are expecting 90000+ fans for the EURO final against Germany at Wembley. Should be a fun match. Fortunately the new soccer channel that was mysteriously added for free to my cable package is broadcasting it.

Good.
I’ll be watching when I get home from wine-tasting this weekend. I could try to find a bar that’s open at 9AM, as wine-tasting doesn’t start until about Noon.

MAJOR development before the final: Popp (GER) injured during warm-ups, and is out.

Colors shown for teams on the score bar will not match colors on uniforms. DTNF’s rant about this fully acknowledged.

90,000 screaming fans at Wembley and the whole nation watching them on the tely: no pressure at all on the Lionesses.

Great atmosphere. Apparently the previous record for a women’s Euro final was 41,000.

MAJOR development before the final: Popp (GER) injured during warm-ups, and is out.

Too bad for Germany but if they lose they can say they would have won if Popp had played.

Very entertaining first half. Much better than the CONCACAF Final which was one-sided and less exciting.

Great atmosphere. Apparently the previous record for a women’s Euro final was 41,000.

And they didn’t need to give the tickets away. Tickets were actually being scalped.

Germany has had more of the advantage in this game. Solid defending, not letting England run jail breaks and good control of the box. A bit surprising, I thought England would play ball control and work on isolating the Germans and then exploiting advantages from there.

Move over Brandi Chastain. You’ve been replaced by Chloe Kelly.

Yes. I know what photo The Sun will be featuring tomorrow….

Very easy to ask what if Germany had been at full strength? because losing your top-2 goal scorers is certainly a hell of a blow even to a top team. Still, Germany had control of this game until the 2nd OT and then it got away from them quickly, and England was ruthless keeping the ball pinned down in the German end thereafter.

Does this put more pressure on the England men’s team to finally have success on the international stage? Does England now go into World Cup 2023 as the favorite? All that and more to be answered in the next 12 months.