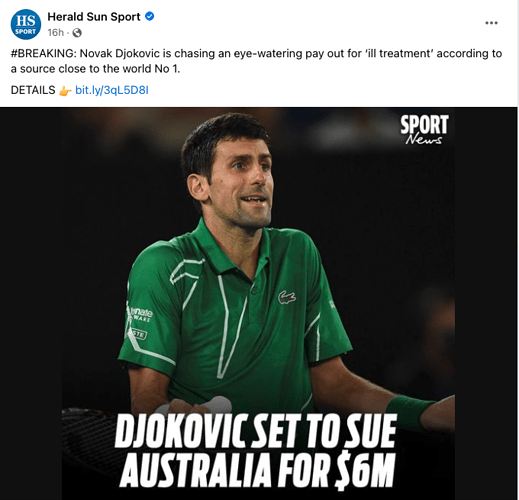 Paywalled, so I didn’t read. But if he were to sue, things would get really ugly if he ever tried to compete in an Australian Open again. (Already will have to skip the next 3, I believe, or possibly only next 2. I believe it’s a 3-year ban before he can reenter the country.)

Herald Sun is part of News Corp, so maybe a worthless tabloid.

LOL living up to the Joker part of his name I see.

He probably injects way weirder shit into himself than the vaccine

Remember when Joker scolded Naomi Osaka to obey the rules and do press conferences? Good times.

The dude has a history of being tone deaf: 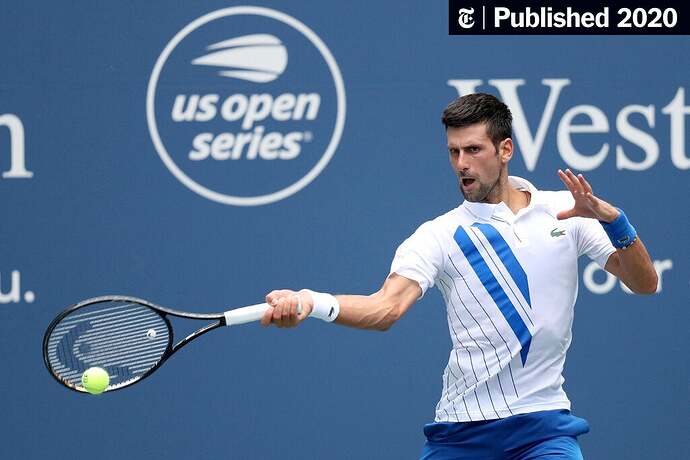 It is not clear whether the group will operate like a union, although it was billed that way to get players to join. Women are not being included.

That looks like a Michael Scott headline from “The Office”

Suing an entire sovereign nation because you are that fucking entitled…

How does this work exactly?

He is suing the nation of Australia for a tort in Australian courts?

If so, what are the chances that the Australian courts find against their own government in a contentious case like this?

Does he even have standing to sue? Does Australia have some sort of legal obligation to unevenly apply their criteria for entry into the country because they are calling their event “open”? What exactly is the crux of his argument?

What exactly is the crux of his argument?

he is big mad?

The winner gets like $2.8M and he’s one of the favorites. I guess he’s looking for the prize money he probably would have won over the next 3 opens if he got vaccinated.

Sure, I guess that’s how he came up with the amount. But what is his argument that he should be allowed unrestricted access to the country despite not meeting their criteria?

Is he arguing against Australia’s sovereignty as a nation? Surely the country can impose any restrictions they wish, right? Even unreasonable ones.

Which… these particular restrictions are not at all unreasonable. But even if they were… like suppose if they decided that they weren’t going to allow people with the middle name Stanley to enter the country… they should be allowed to do so, no matter how ludicrous that may seem to the rest of the world, right?

What is his argument that Australia is wrong to restrict his right to visit the country?

But even if they were… like suppose if they decided that they weren’t going to allow people with the middle name Stanley to enter the country… they should be allowed to do so, no matter how ludicrous that may seem to the rest of the world, right?

Potentially he could be arguing due process: that he was compliant with all Australian regulations but that some beaurocrat misapplied the regulations.

In fact, I don’t expect he will sue and he may have never had any intention to sue. I started to compose this thread before I saw the source, then went ahead since it still seemed somewhat interesting. That newspaper’s claim that he’s planning to sue has little more credibility than if it published a story reporting that the Loch Ness monster has now been seen in Australia.

Hmm, ok. Here is another article, not behind a pay wall. 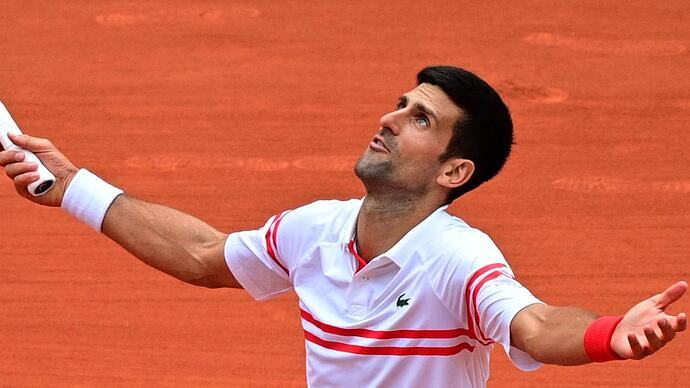 It says he received “ill treatment” at the detention facility because there were fleas and maggots.

Fleas is kinda gross. I mean, that’s a parasite. I don’t know where the line is for inhumane treatment. I suspect in the US, flea-infested would be considered inhumane. If that is a typo and it was supposed to be “flies” then I think that’s a pretty weak case.

I guess the other issue is if he’s even telling the truth. It seems plausible. His claim is certainly all over the place. If you Google “fleas Melbourne detention” you get a ton of hits, but all about him.

I’m not sure if there have been any rebuttals.

Sounds like the supporters of the 1/6 defendents clamoring for spending on better jails and prisons bc…people like them had to spend a minute in them.