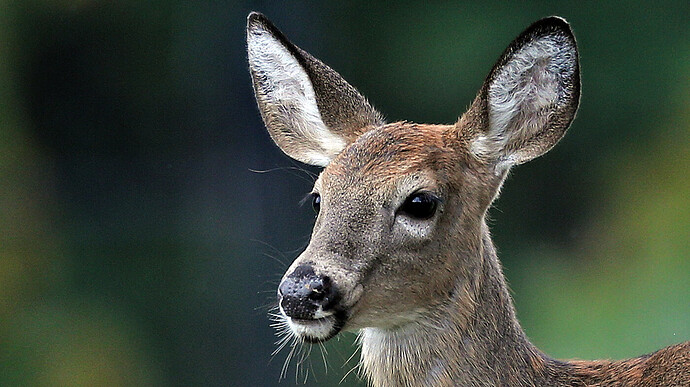 Scientists have evidence that SARS-CoV-2 is circulating in white-tailed deer in the U.S. They say the findings could essentially dash any hopes of eliminating the virus in the U.S. — and the world.

We need to get deer better at wearing masks, and need to start vaccinating deer

This is definitely not going to help the gun control debate

Is this that bad? Haven’t we already realized covid is endemic?

We have vaccines, and those monoclonal antibodies are pretty good. Can continue to improve in those areas.

Well it’s already been discovered in several other mammals, so deer is hardly surprising.

Multiple tigers at various zoos have tested positive for Covid, as well as lions, hyenas, pumas, gorillas, minks, and domestic dogs and cats and ferrets.

Some zoos are vaccinating their animals.

So yeah, not even a little surprised.

Yeah. I was slightly surprised to read that 80% of the deer they tested were positive at one point, but I pretty much expect that most mammals will be susceptible.

Maybe discovering ones that aren’t will lead to better vaccines and/or treatments. That would be exciting.

Is this that bad? Haven’t we already realized covid is endemic?

Yeah I thought we were all on board that 0 covid wasn’t going to happen.

My hopes are pinned on vaccination and improved treatments. Not on total elimination.

I do hope it doesn’t prove to have a high fatality rate for any species. (Like white nose syndrome in bats) but I’m resigned to it being carried by wildlife. And, uh, have been for more than a year.

Hmm. Unvaccinated hunter FIL just bragged he got a deer. Glad we are skipping holidays with them this year.

So how did the deer get the virus? Were there some unmasked infected humans not socially distancing from wild deer indoors somewhere?

I want to know how it’s spreading in deer populations if outdoor transmission is really not a thing, because that’s the only obvious explanation for high seroprevalence in deer. Are the deer grooming each other and instead getting it that way? That doesn’t seem right to me although I’m not outdoorsman.

Another possible explanation is that somehow deer are superspreaders with very high viral loads in their respiratory tracts and are thus able to transmit it outdoors when they’re in close proximity. It could also be that it causes more severe respiratory symptoms in deer and so they’re coughing or sneezing a lot more often and that permits easier transmission outdoors. Lastly, and perhaps most likely, maybe the “household” dynamics of the deer cause this where obviously they don’t know to keep distance if they’re sick and so it spreads easily through their herd when they sleep close together or whatever.

Outdoor transmission is possible in humans, too.
And probably more common with Delta than it was previously. But unless you are standing close and breathing in someone else’s face it’s highly unlikely. But, “there’s plenty of air to dissipate it” only comes into play if you leave some space between you and other people.

Deer do stand in clumps, face to face. I’ve seen them doing it.

Outdoor transmission is possible in humans, too.

In theory. Do we even have a single documented instance of it, though? At some point I had seen the only evidence involving I think construction workers in Singapore working outdoors, but they were actually eating lunch indoors in some cases.

It’s obviously spreading outdoors in deer, it’s still peculiar for deer to have a very high 40% seroprevalence rate when they’re never indoors and for human seroprevalence to generally have been considerably lower even though they’re often indoors. It seems as though something else is going on. I could see the grooming explanation if they’re in each others face, particularly licking each other’s faces. Obviously deer don’t social distance, but I still wonder if somehow it’s more contagious among them.

At the peak of the surge, Kapur says, the prevalence of the virus in deer was effectively about 50 to 100 times the prevalence in Iowa residents at the time.

So it may be more contagious to deer.

But how many truly documented cases of spread anywhere do we have? It’s expensive to map the genome of a case and demonstrate its source, even when it’s possible. “No cases proven to be spread outdoors” is very very far from “proven not to spread outdoors”.

Many people have hypothesized a fecal-oral transmission pathway, and covid virus has been found in waste water (in fact, some of the early seroprevalence studies measured waste water).

In fact, my local sewage authority publishes covid levels a few times each week. It’s one of the most reliable sources of local prevalence, since it’s not affected by stuff like how many people choose to get tested.

I think Marcie may be onto something. My reasoning was that if, in humans at least, outdoor transmission is relatively very rare with the vast majority of transmissions occurring indoors, then how do deer have higher seroprevalence? Additionally, deer aren’t particularly social to my knowledge, at least not as social as humans, and so wondered too how it’s transmitting from herd to herd to get to such a high seroprevalence. Fecal-oral route could explain this, particularly if deer are sharing a water source.

Does and fawns stick together spring to fall.
In the fall, when the rut is on, bucks and does are together quite a bit.
After the rut, in Jan February, deer actually congregate in large packs. I’ve seen herds of 40.

This. If you witness deer behavior on the regular you should not be surprised of easy disease transmission between them.

I wonder if there are other species with similar infection rates.