My first grader really (thinks he) wants to join. I really do not want him to, for many varying reasons of varying degrees of validity.

Parents of the GoA, talk me into or out of it based on your experiences.

And as a side dish, please enjoy mocking this graph on the flyer with me. 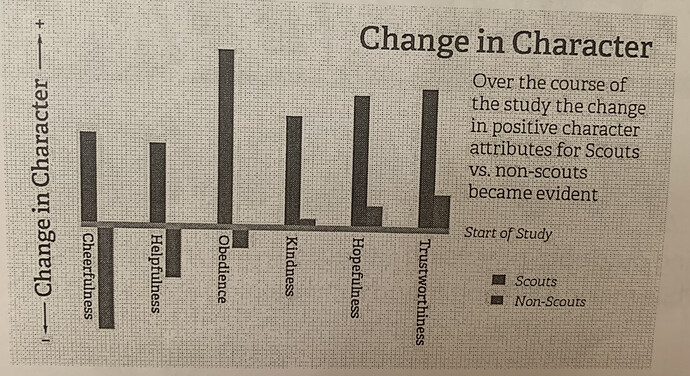 Hmm…I was never involved in a scouts program as a youth but would have enjoyed it, I think.

Your first grader probably wants to join since his friends are in it & talking it up.

It’s another obligation on your schedule/time. (That doesn’t mean that it won’t be worth it.)

Your “values” may/may not line up with this organization’s. Determine how important that is to you.

I’d question the validity of the graph.

I was a cub scout (arrow of light and everythign), but it was the “activity” that my church had for young boys, so I already pretty much knew all of the other kids there. I have no idea how it would be just joining some random pack.

My kids were involved until the church went away from it. But for the last couple years of that we lived 100 yards from the church, so we could just send them over and it didn’t take up much if any of my time.

My brother and I were scouts. The Cub Scout troop we belonged to was based in a church and many, but certainly nowhere near all, of the scouts went to that church, but afaik it couldn’t be said to be affiliated with the church in any meaningful way other than the building and a little advertising. I"m not sure how much of my experience is dated. The den meetings were pretty much play dates with organized activities or crafts. Pack meetings tended to be more meeting-like and some were boring - they had speakers of varying interest, awards, etc - but some were very good. Our best was when we had a ex-baseball player (Moose Skowron) give a talk and he was extremely entertaining (and I’ve since heard that his talk with the leaders was an order of magnitude more entertaining when no kids were present). We both enjoyed our experience in scouts and seem to have turned out OK, so it didn’t ruin us. I think that what kids get out of it just depends on who has volunteered to help the troop. Ours was very well-run, had relatively little drama, and had no crises that I"m aware of. If you want to affect how it is run, volunteer.

BTW, my brother and I both went on to Boy Scouts, where the focus was very much more on campouts and merit badges. We did a lot of camping.

As far as “values”, I was not aware of any “agenda” in Cub Scouts. The motto mentions duty to God, but didn’t really come up with my troop, despite it being housed in a church. There’s nothing to object to in the motto and, besides the mention of God, I’d think there’s nothing one could object to in the oath. Duty to country, helping people, keeping fit, and being “morally straight” seem pretty positive things.

Gay leaders? I wouldn’t know if we had any. And would not have cared. We didn’t have any child molesters that I’m aware of.

Battles with Girl Scouts and the inclusion of girls? That was after my time. I do know that my sister was always annoyed that they wouldn’t let her into Cub Scouts because they always had better activities in the troops near us.

And, as far as the God part, most people in the troop I was in would be classified as Christian, but there was a decent Jewish presence. I was not aware of there ever being any problem with that.

What are your reasons for not wanting him to join? If we knew those, maybe we could address them directly.

My husband is an atheist (I am not) and I suspect it would raise some issues there.

I am not big on fundraising. I really really am opposed to it. I know it’s a big thing in Boy Scouts, maybe not as much of a thing in cub scouts? But cub scouts is a gateway club to the harder org.

I have some real issues with BSA’s historical lack of inclusion. I know that’s changed recently, but I’m not really past it.

I have some real issues with BSA for a lot of other reasons, too. I think it’s a corrupt organization.

I don’t “do” nature. I don’t do camping. I don’t value those things and don’t know that I would be able to motivate my kid to value them either.

My older (step) son wouldn’t be joining (not interested). It’s one more thing they would be lacking in common. A big consideration for our family, bigger than I imagine it is for more traditional families.

I am pretty anti-establishment and don’t enjoy pushing organizations that value obedience and compliance over, say, pushing back against “because I said so” mentality. And the fact that there was so much sexual predation that went unreported for so long makes me think that speaking out against bad leadership ISN’T encouraged. That’s just a hunch though.

On the other hand, my kid should have freedoms to do what he wants to do, even if it’s not what I would have chosen for him. And he would probably love the structure, and it would be a nice way for a socially awkward kid to meet some other kids.

And he is really excited about it.

So I think I know what I ought to do. Which is let him attend the info session and make a decision then. With his dad. Because I’m not going to be the one attending that crap. Plus, I’m a woman, after all.

I did scouts. Pros:

Moms are about as equally involved as dads at the cub level, it drops off to mostly dads at the scout level and then basically unsupervised at around eagle (older scouts supervise).

What is the draw for him? Specific kids who are in the troop or scouting in general? If scouting in general, there are other organizations like Adventure Scouts that you could look into. I don’t have any experience with them, but that would at least take care of the problems that you have with BSA.

My son was in cub scouts for a while. He got bored, didn’t make many friends, and dropped out after a couple years. He liked the outdoorsy stuff the best, but it wasn’t enough to keep him interested. We weren’t too heartbroken as it was a big time commitment with weekly meetings and lots of activities on the weekends. That probably varies by troop. We are not religious, but his troop was not pushy, so that part wasn’t a big deal. That may also vary by troop.

Isn’t is somewhat expensive? The church always covered the cost for us.

Compared to something like music lessons or sports, I don’t think so.

Yeah, it really depends on what you’re comparing it to and how much fundraising the troop does. Between the yearly dues and the uniform, it was about $200 a year. Fundraising covered everything else. Compared to our Girl Scout Troop, that’s expensive (particularly for the uniform!). Compared to some other activities, it’s pretty cheap.

If he joins, we will require him to commit to it for the full year (won’t have to do every event but will have to attend the meetings and at least some events). A couple hundred bucks isn’t a big deal. He doesn’t do anything else as far as extracurriculars go.

I was never in Scouts so can’t really comment. I suspect the troop is only as good as it’s leadership, and if your son makes friends with the rest of the troop or not.

My biggest concerns would be sexual abuse which seemed to be rampant from the settlements and how much of my dues is going to help pay the past $1.8b settlement recently reached.

I thought it was an awesome program. I loved the outdoors aspects of it. I loved the camaraderie of the kids and adults. I met some incredible people. I had some wonderful experiences. I’m still in touch with many of the people I met. I still take extended trips into primitive wilderness areas.

I’ve read the “secret files” when they were published. I knew some of those men. Luckily I was never preyed upon by any of them. I’ve seen the training and requirements the BSA put into place to prevent those situations in the future. I think they’re very effective at protecting both the youths and the adults involved in the program.

If you decide to let your son join, the best way you can make sure your son has a positive experience is to volunteer to be a den leader (or asst. den leader). Don’t worry if you have no idea on what to do, there is plenty of training available. Don’t be afraid to ask the other adults in the pack for help. Like anything in life, the more effort you put into it, the more you’ll get out of it. Remember, very few things in life are more important than raising your children. They’re worth the effort in whatever path you choose.

Our kids did Navigator scouts for a few years. You might check and see if there is a local chapter near you. It’s pretty much up to the parents to figure out fun things for the kids to do each week although there were a few who took the lead most weeks. We did pinewood derby, scavenger hunts, building rockets, campouts, emergency medicine training, stuff like that. Pretty low-key and the kids had a good time.