Sadly, this deserves its own topic. India is experiencing a second wave of covid that is overwhelming its hospitals and its crematoria.

What’s weird is that this wasn’t supposed to happen. In the first wave, the government imposed draconian and often counter-productive restrictions. And half the country was infected with covid. And very few people died. It looked like India’s young, slender population that doesn’t spend much of its time indoors, and had previous exposure to related coronaviruses, was largely immune to the worst aspects of this bug.

Then the second wave hit. The NYT free daily email gives a good summary, so I’ll paste it here:

I was just reading that same email.

Let’s check the Our World in Data profile 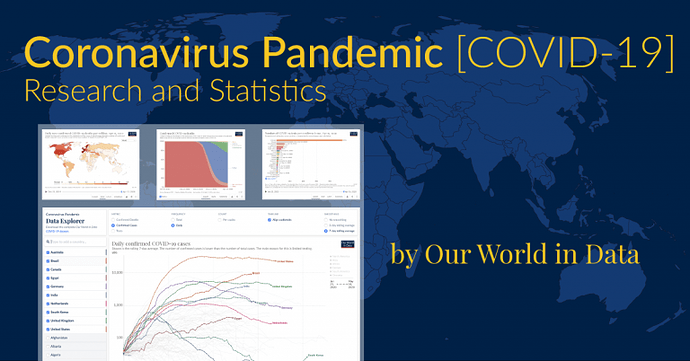 India: What has been the impact of the Coronavirus Pandemic (COVID-19)? 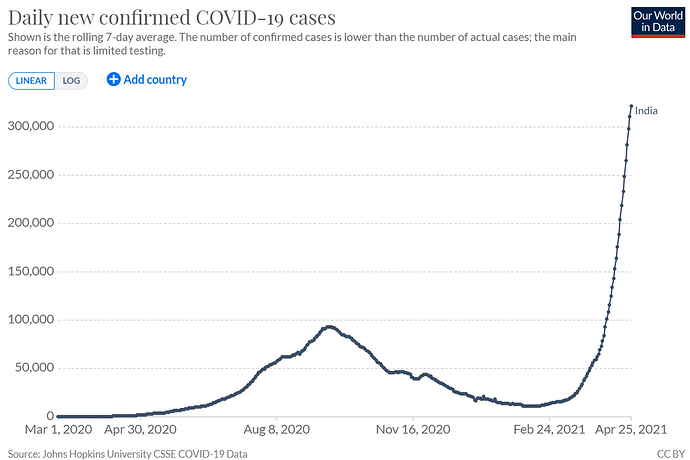 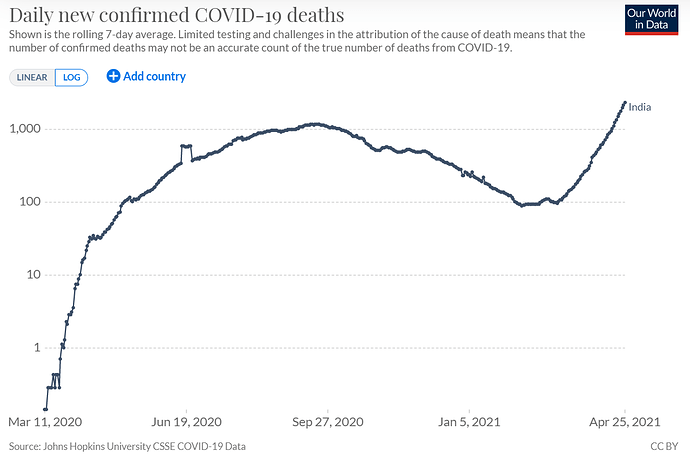 fwiw, cumulative deaths aren’t too bad (yet, as a rate) 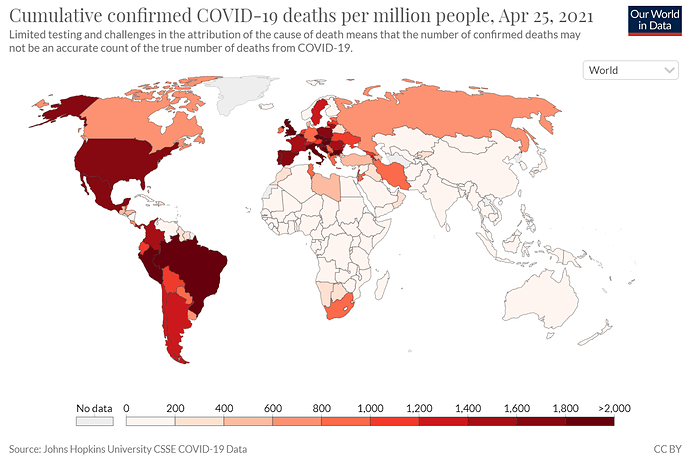 It still makes me wonder – why were cases/deaths so low in places like Washington state? It was an early entry point (in Seattle), but the result has been nothing like what happened on the east coast. NYC’s nasty outbreak came from Italy, iirc… the outbreaks coming directly from China sounded like they weren’t as bad.

People spend a lot more time outdoors in WA than in NYC. I really wonder if there isn’t something important there.

Also, by all accounts, the official death toll for India is grossly understated right now. India doesn’t count all its deaths even in normal times, and the covid-deaths out of India have always been pretty squishy.

But in prior reporting, I heard things like “I see more fires than usual in the crematoria, but it’s hard to say by how much”. And now I hear things like “the crematoria are overwhelmed, and grieving families are told they need to wait until there is capacity to burn their loved one’s body.”

That case curve in India is frightening. They are running out of oxygen between what is needed currently and the oxygen being bought on the black market, and they have at least another two weeks and 2x the current level of hospitalizations and deaths ahead of them.

Cases have been at ~350k a day for three days now. Are cases peaking, or is that hitting a testing limit.

I am sure there is massive undercounting all around.

Are cases peaking, or is that hitting a testing limit.

Is there data on positivity?

Most articles I found are about a week old, but there is a youtube video headline from yesterday:
" India Record Highest Corona Positivity Rate Day By Day | Ntv"

An article on Delhi, also from yesterday:
The positivity rate also fell to 30.21% from 32.27% a day before to the latest bulletin issued by the city health department. With the fresh cases, the national capital’s cumulative COVID-19 tally has climbed to over 10 lakh and the death toll due to the viral disease stands at 14,248, the bulletin said.

I was surprised that India hadn’t been more overrun already. To my layman’s eyes it makes sense that (A) people may have been getting COVID from incidental outdoor exposure instead of concentrated indoor exposure, therefore getting mild cases giving partial resistance, and (B) India doesn’t have resources in many areas to test or record COVID cases/deaths.

Not sure what changed recently that more people are dying of it however. Is is a true explosion in cases or just better detection and treatment running the hospitals out of resources? Probably some of both.

Seems like a true explosion. Meeps link had a prior positivity rate of 12% in the fall peak, and now it is at 20%.

People Are Talking About A 'Double Mutant' Variant In India. What Does That...

The term is a reference to two particular mutations in SARS-CoV-2. But the variant in India could carry additional mutations.

better detection and treatment running the hospitals out of resources? Probably some of both.

I can’t think of any way that “better detection and treatment” could lead to crematoria running overtime and even so not being able to keep up with the bodies. And i can’t think of any reason to expect “better treatment”, either. They are running out of oxygen. Covid patients have been treated with oxygen from the very start of the pandemic.

So I’m putting my money on “almost completely due to the pandemic getting worse in India.”

My best guess of the cause is new variants that are less cross-reactive with other corona viruses that people in India already recovered from.

But I’m also reading that people who got mild cases early on are among those who are getting deathly ill now.

You’re right, it’s probably more on the explosive growth side. I was speculating, given the vast land area of India with many small villages, there may have been a lot of deaths not noted as COVID, potentially just buried in whatever village graveyard exists. But I’m sure it’s a true surge. So sad to read about.

I’m sure this is a true surge, and likely the reported numbers are understated for reasons you all have said, and these are large numbers, each of which is tragic, but just to put those reported numbers into perspective a little: 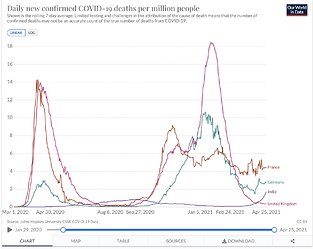 That’s a fair perspective. India has a huge population. The trajectory is frightening given there are no signs of it easing, and the country is already running out of oxygen with hospitalizations likely to at least double in the next two weeks as severe illness catches up. How much does a much younger population help get through that. 18 deaths per million per day is ~25,000 a day in India. That is a lot of suffering. 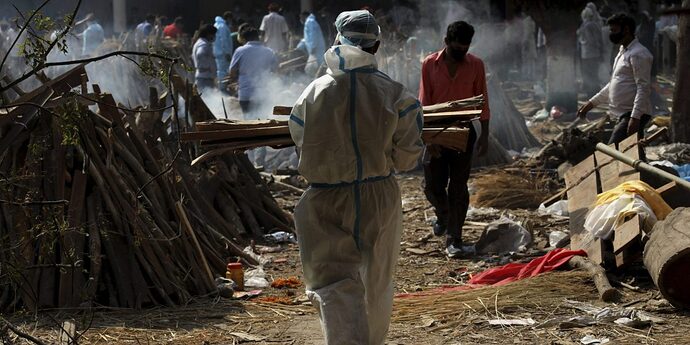 The world is waking up to India's plight—too late

India has started receiving aid from other countries to help quell its covid-19 crisis, but the situation remains dire

Not really. It’s a fair bet that India is undercounting to a much greater extent than France, Germany, or the UK, and most estimates put their actual caseload much higher than the published figures, and almost certainly higher than the other countries shown.

India’s positivity rate is about 30%, as compared to about 7% or 4% (depending on where I look) in the US. And the US positivity rate is going down, with basically stable volume of testing, while India’s is going up, with increasing testing. So even though their published cases/100,000 people is only slightly higher than that number for the US, their actual rate of infection is almost certainly much higher than ours. 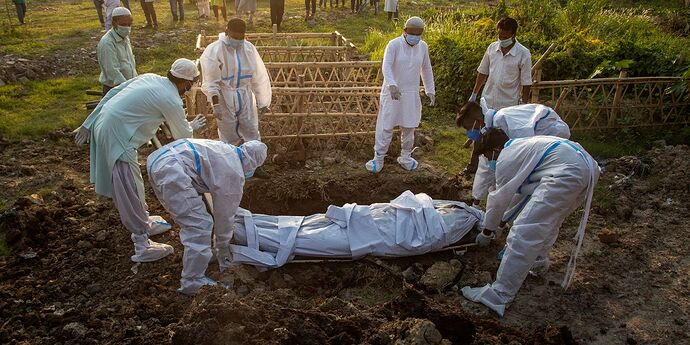 India’s Covid Surge Is Most Ferocious Yet. ‘Spreading Like Wildfire.’

The new coronavirus wave hit nation of over 1.3 billion after loosening restrictions and public complacency set in, with variants possibly at play; too few beds, too little oxygen.

Oh, its absolutely worse than it is here and what the numbers show there. Is there an estimate of the undercounting? I am mostly focused on that peak for the UK, they are still a long ways from that even with significant undercounting.

New cases have leveled off the last few days, with a drop yesterday, but that seems to be the weekly pattern.

The estimates I’ve seen are that they are undercounting cases by a factor of 6 to 20, and deaths by a factor of 2-5, but none of the sites I’ve looked at has given a methodology for any of those estimates. So I dunno.

2x on deaths I’d believe, 5x puts it in the range of the UK in a couple weeks time. That would be horrifying if true given the average age in India.

In case anyone still doesn’t believe how horrific things are in India right now, I would recommend reading the following before [redacted] dismissing the crisis 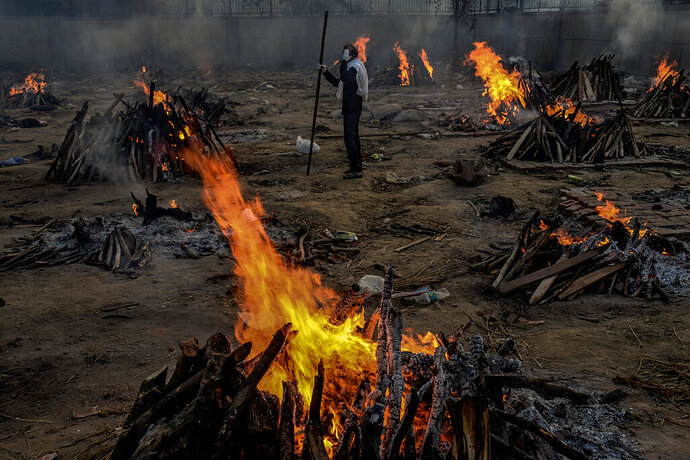 ‘This Is a Catastrophe.’ In India, Illness Is Everywhere.

As India suffers the world’s worst coronavirus crisis, our New Delhi bureau chief describes the fear of living amid a disease spreading at such scale and speed.