Since it’s often been hard to find COVID test kits, I thought it might be helpful to have a thread letting others know when and where you find them online.

Right now Walmart has the Binax Now kits available online for $20. If you don’t have any kits in your house, it might be a good idea to get at least 1 kit per person.

Did this immediately, good call.

Walmart uses DHL who is terrible, but lets you order more. I have 8 boxes coming from them, but they were originally supposed to arrive 12/30 and now it looks like 1/10.

Shipping is a bit slow, and I’m told the swab is scratchier and more unpleasant than the BinaxNow one, but they’ve been pretty available.

And out of stock again.

I only see that on walmart’s site for pickup, not shipping, and the closest walmart to me is too far away and doesn’t have it anyway.

i have 2 boxes with 2 tests each in my apartment right now anyway and not planning to use them unless i have definite symptoms.

Walmart’s website will go in and out of stock multiple times a day with different brands.

I like the onGo brand best, but they are all fine.

Ships in 2-3 weeks from Amazon: 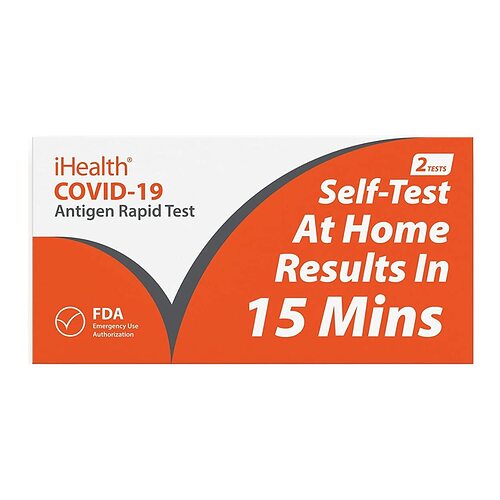 Not really useful for those who want/need a test NOW, but I’ve been putting in periodic orders with the intent to maintain a small supply, since my wife and I will want to test before spending time in environments where we could expose people.

For example, my wife is flying home next week from an extended stay with her parents. She’ll test before going to the airport. I think there’s a decent chance that we’ll both be exposed to COVID because of her trip – her from time in airports and airplanes, and me from time waiting at the airport to pick her and her luggage up.

I have a colonoscopy scheduled six days after her return; so we’ll test again before I start the unpleasant part of the prep, to have some assurance as to whether we might have picked up COVID again / whether I ought to reschedule.

suddenly could order them from walmart. just ordered 4. i feel like such a horder

Just looked again and ordered a box for everyone. Probably should’ve ordered more.

Just looked again and ordered a box for everyone.

Thanks! I’ll be over soon!

Work had some available before Christmas. They were snatched up in minutes. I was shocked they went that fast; had a very March, 2020 feel where people were snatching anything off store shelves thinking I MAY NOT USE IT, BUT I GOTTA HAVE IT ANYWAY and I suspect over time, a whole lot of stuff ended up in the trash unused.

I have a test scheduled for the 11th, before surgery. Not really going out anywhere at the moment other than for pre-surgery stuff, so if I somehow end up positive it would be because others in the family somehow got infected in their rare trips outside the house. Beyond that, not overly interested in getting tests. I’m asking do I really need to have tests around the house? and am fairly conviced the answer is no, if I’m that concerned I’ll find somewhere that’s offering tests.

I think it’s overkill for me to have 6 boxes, but one or two I think is nice to have in the house since it’s not that easy to get tested officially these days from what I’m hearing.

also, if I get covid, I’ll be testing to see a negative result after being positive. that might take some extra tests. some people remain positive for months, but at least according to the over-the-counter tests my sister did, she became negative after a week and that was good enough for her to declare herself negative. PCR test might still be positive though, but she isn’t bothering with that.

I’m asking do I really need to have tests around the house? and am fairly conviced the answer is no, if I’m that concerned I’ll find somewhere that’s offering tests.

I like having at least 1 kit per person around. It can take days to find a home kit or an appointment here, OR ridiculous wait times. That’s an inconvenience, but particularly if you are feeling ill. I have 3 kits at the house for 2 people, which is enough for now.

ETA: my wife wasn’t feeling well at some point last year. She had sinus congestion and headache, so we thought getting tested for 'Rona would be wise. I looked around for the better part of the day on line and in person, and found zero test kits available. It took a couple of days for her to get an appointment for a test. Given that it was a bit of a PITA I got some kits for the next time we might be in that situation.

I had one box of kits per person, but ordered another box per person this morning. The Binaxnow are out of stock again, but I think I’ll probably order one more set per person. I don’t want to hoard, but I don’t want to worry I’m wasting a test unless I’m clearly sick, since it’s harder to get tested now.

Here is a site that tracks what’s in stock and where, it’s not always 100% up to date but my coworkers have been successful using it:

Looking for COVID Tests but having no luck? Maybe our FREE COVID Tests In Stock Tracker can help!

Don’t get me wrong, I have no problem with people who want test kits and will use them. I just think there’s also people who are getting them for theater, getting them purely so others won’t have them, and so on - and there’s going to be millions of unused kits that land in the trash.

No, I have no idea how we prevent that.

Like I said, I test every time I gather in any form. We go through maybe 4-5 boxes a week.

It was really helpful to have rapid tests handy when my mom developed “a cold”. It meant we could start the clock looking for covid treatment a day or more earlier than if we’d had to wait for a PCR test and the result.

If you are young, vaccinated, and have a normal immune system, this would be unnecessary. But she’s old and immune compromised.