If Trump were charged and jailed for the Jan 6 insurrection or any of the myriad things the left wants to charge him with before, during and after his term as president, might we see the type of civil unrest that SA is seeing? I actually wouldn’t be all that surprised if we did see some pockets of it. 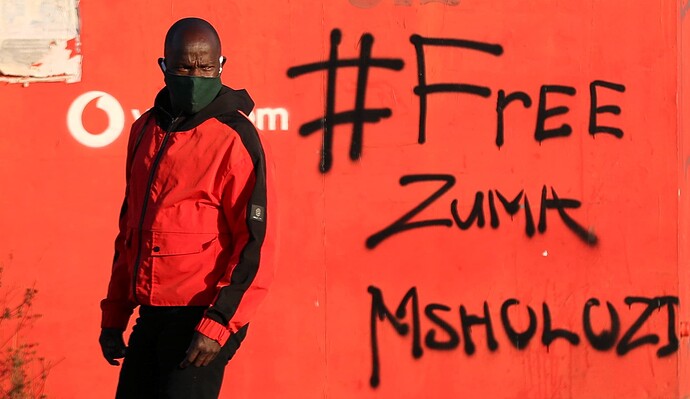 Protests erupted in South Africa last week after former President Jacob Zuma handed himself in to police to serve a 15-month jail term for contempt of court.

The “storming” of the Capitol was primarily limited to DC but there were coincident pro-Trump protests at various state capitols across the country.

ah, okay, i guess i don’t live in a state capitol, so i felt more removed from it than other protests that did involve my city last year.

Also, the “storming” of the Capitol was by people who gathered from all over the country (and, of course they had a target). But what if those people stayed home and fomented the insurrection from where they were?

i’m not sure we have many crazy trumpkins in manhattan. those crazy staten islanders though might travel over

But once the looting starts…

No one wants to carry stuff from Manhattan to Staten Island.

If his supporters are this dangerous all the more reason to jail him for encouraging it.

We already had riots. On January 6th. Led by the guy who should be arrested for it.

We have been having politically motivated riots and killings my whole life. As Solomon said in Ecclesiastes, there is nothing new under the sun. Bad humans have been a constant throughout human history and they aren’t even finding new ways to be bad. Lying, stealing, and killing have always been and as long as we exist they will continue to be.

I could see a smattering of meaningless strutting. I don’t see enough Trump supporters willing to sacrifice for the cause. Prosecution and incarceration of the January 6th insurrectionists will make it a little too real for most of the Trump supporters. In short they will bitch and moan but they aren’t going to lose their job over it.

I think there are two possible important dynamics.

The first is that jan 6 was a unique opportunity due to trump being president, and it’s significance in the transfer of power. This is what made it an insurrection instead of just a violent mob. Hopefully that opportunity will not come again.

Second, much of trumps appeal is from being a winner. This is why he cannot admit that he lost the election. I’m not sure that can translate into martyrdom. A martyr has to sacrifice for something greater than themselves. But trump allows nothing greater than himself. Maybe a jailed trump can be a heroic figure suffering to make america great again, and maybe that is somebody who can rally a mob. But a jailed trump might also lose his appeal by virtue of being a loser.