I knew it was more serious because it attacks lungs. I didn’t know all of this:

“Received this today from a good friend who has family in the medical field. Give it a look. At first I thought all of this panic was unfounded. I don’t think I feel like that anymore.

Feeling confused as to why Coronavirus is a bigger deal than seasonal flu? Here it is in a nutshell. I hope this helps. Feel free to share this to others who don’t understand.

It has to do with RNA sequencing…
i.e. genetics.

Seasonal flu is an “all human virus”. The DNA/RNA chains that make up the virus are recognized by the human immune system. This means that your body has some immunity to it before it comes around each year. You get immunity two ways: through exposure to the virus or by getting a flu shot.

Novel viruses come from animals. The WHO tracks novel viruses in animals (sometimes for years watching for mutations). Usually these viruses only transfer from animal to animal (pigs in the case of H1N1) (birds in the case of the Spanish flu). But once one of these animal viruses mutates and starts to transfer from animals to humans, then it’s a problem. Why? Because we have no natural or acquired immunity. The RNA sequencing of the genes inside the virus isn’t human and the human immune system doesn’t recognize it, so we can’t fight it off.

Now sometimes the mutation only allows transfer from animal to human. For years, it’s only transmission is from an infected animal to a human before it finally mutates so that it can now transfer human to human. Once that happens, we have a new contagion phase. And depending on the fashion of this new mutation, thats what decides how contagious or how deadly it’s gonna be.

H1N1 was deadly, but it did not mutate in a way that was as deadly as the Spanish flu. It’s RNA was slower to mutate and it attacked its host differently too.

Now, here comes this Coronavirus. It existed in animals only. Nobody knows how long. But one day at an animal market, in Wuhan China, in December 2019, it mutated and made the jump from animal to people. At first, only animals could give it to a person. But here is the scary part…in just TWO WEEKS it mutated again and gained the ability to jump from human to human. Scientists call this quick ability, “slippery”.

This Coronavirus, not being in any form a “human” virus (whereas we would all have some natural or acquired immunity) took off like a rocket. And this was because humans have no known immunity. Doctors have no known medicines for it.

And it just so happens that this particular mutated animal virus, changed itself in such a way. The way that it causes great damage to human lungs.

That’s why Coronavirus is different from seasonal flu, H1N1 or any other type of influenza. This one is “slippery”. And it’s a lung eater. And it’s already mutated AGAIN, so that we now have two strains to deal with. Strain S and strain L, which makes it twice as hard to develop a vaccine.

We really have no tools in our shed with this. History has shown that fast and immediate closings of public places has helped in the past pandemics. Philadelphia and Baltimore were reluctant to close during events in 1918 and they were the hardest hit in the US during the Spanish Flu.

Factoid: Henry VIII stayed in his room and allowed no one near him until the Black Plague passed. Just like us, he had no tools in his shed, except social isolation.

And let me end by saying that right now it’s hitting older folks harder. But this genome is so slippery. If it mutates again, who is to say what it will do next?”

My sister is chastising my 78yo mother (who has had open heart surgery, 2 other heart surgeries, has COPD and smokes a pack a day) for going out. Going to the dentist, going to work (she works with seniors, go figure), going shopping.

Mom just sent an email back saying she watches the news so she knows as much as anyone. The dentist wears a mask and there’s not many people at the stores so she’s fine. And…she has no intention of living under lock and key.

Hey, Serena, do you have a source for this that I can go to? This is very informative and I would love to be able to read more.

I’ve been reading so much stuff, I forget where I find stuff.

I’ll see if I can find the source for that.

That’s kinda true, but the science is a little off. It’s not a question of whether a virus is “human”, it’s a question of whether most people have been exposed to a particular virus before. None of us has been, so none of us has immunity, and we have no “herd immunity”. It also happens to be a moderately nasty virus. Not as nasty as ebola, or even as nasty as the 1918 flu, but nasty enough to kill a lot of its hosts.

And alas, viruses mutate. This one already has mutated into two main strains with numerous sub-strains. Here’s a picture: 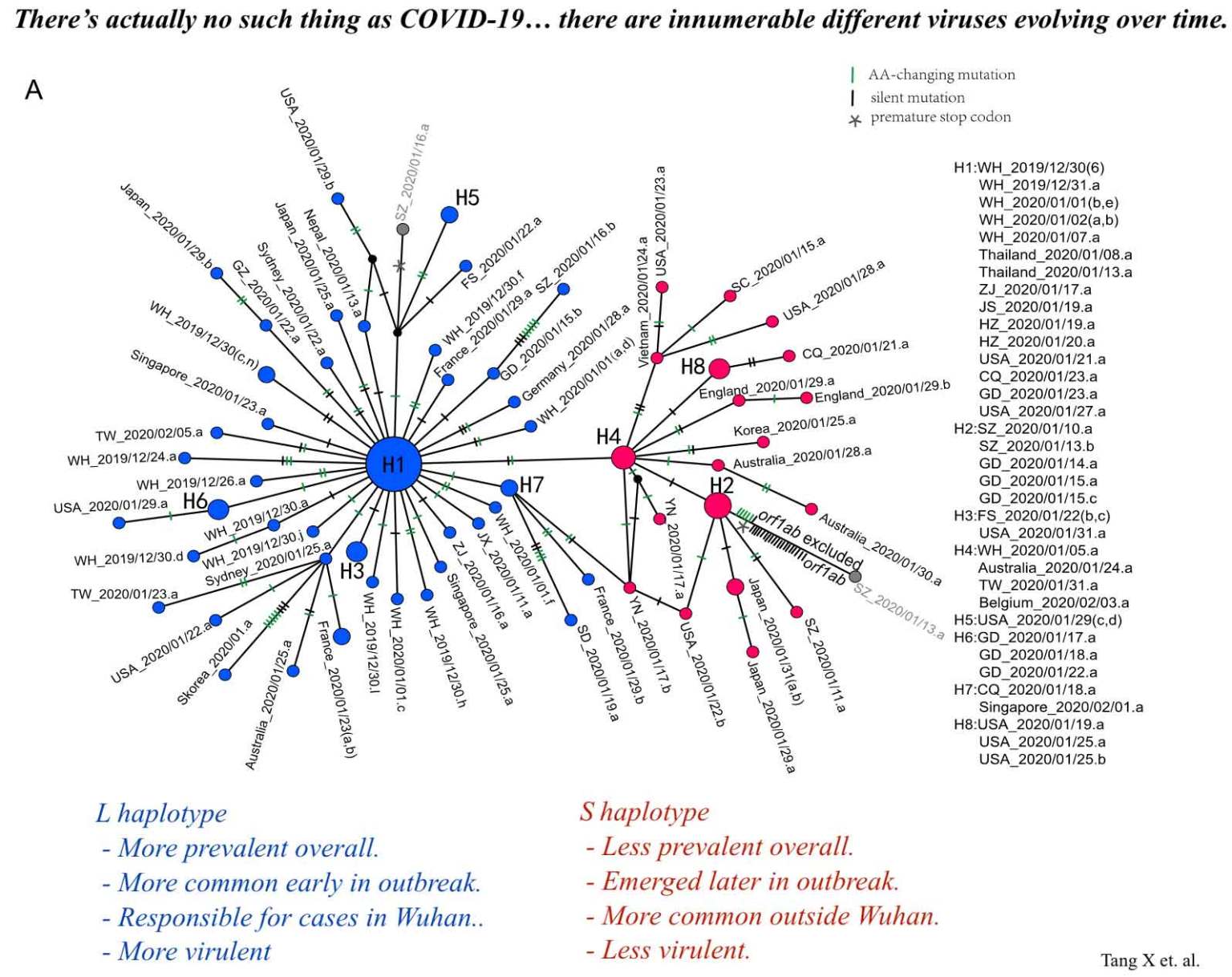 I’m wrapping up a stats modelling course right now and the graphs look like…insufficient data and a bunch of stuff not accounted for :).

How is confinement treating everyone? In Canada pretty much everything is shut down, streets are empty.

I’m getting cabin fever, but I’m getting some work done. No pressure studying for exams for some courses that I’m taking (history of the internet, applied linear regression).
I’m finally building a retropie 1980’s gaming console. I have some old raspberry pi’s sitting around, seems like a good time to get that going. I’ve got joust and galaga running so far.
And we started doing a “Tuesday at Ten very important business meeting” zoom meeting each week with a distant friend. Make a coffee, take a break from work, get caught up.

I work from home anyway, so not really feeling “confined” so much.

Kids are going nuts though. Looking for work-arounds. My two aren’t staying with me. But also aren’t going anywhere else, so are allowed to visit. Gives them a change of scenery I guess.

I’ve lived most of my life in apartments so glad I’m in a house - it’s less confining. I do a steady amount of online events, especially those involving music and services, and as long as it’s not raining I go outside for a walk or run.

Yes, I wfh also, so this feels more like business as usual to me. But, most of my staff aren’t used to it. so I’m trying to check in with them frequently in case to make sure they’re okay.