What a complete barffest. This is the worst election ever.

The ‘democrats’ and the ‘republicans’ are both a mess. They both have fringe parties that have pulled out the weirdo’s from their respective parties (and thus, some of the vote, which may affect results). For the more central voters, both main parties have problems that are deal-breakers to most reasonable people.

And I won’t register a protest vote. I did that once decades ago, when both of the main parties needed a talking to. Except that time EVERYONE voted in protest, and we got a smaller fringe party as the majority - and that was a pretty clear disaster. I can recall speaking to my friends the day after that, and everyone said the same thing. No way was I voting L or R, but I’d never have voted for that party if I thought they were going to get elected.

I had reservations about my choice when I went into the polling booth, and frankly, still not confident I made any sort of reasonable choice after I voted.

I noticed a few days ago that Obama wants you to vote for Trudeau. 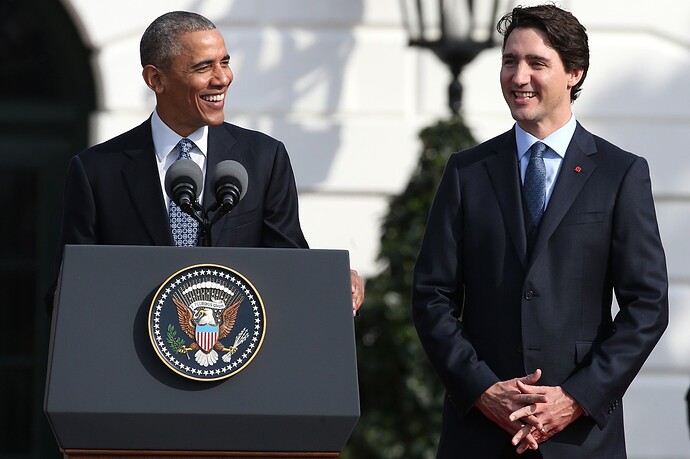 "I'm proud of the work we did together," the former president told the prime minister.

Trudeau is no Barack Obama. Trudeau’s father, yeah. But his son is a spoiled rich kid with no accountability.

Trudeau’s father did a piroutte behind the queen of england’s back. He rolled tanks into Montreal. He publicly told other ministers to eff off.

Trudeau himself is photogenic and that’s about it. Oh, and his mom slept with mick jagger.

Are the Canadian’s too polite for the Political Sub forum?

Oh and why vote for PM when you can vote the guy you hang out with at Timmy Hortons?

Are the Canadian’s too polite for the Political Sub forum?

Seems like team USA has crept across the northern borders?

45 minute wait to vote, polls are a complete mess since they’re trying to avoid schools.

Trudeau called an election because he thought he had enough goodwill from the vaccine rollout to get a majority, this could’ve waited another year. As much as I don’t want him to win my faith in O’Toole is even lower. Turd sandwich v giant douche, south park called it…

How does this work? Do you not just have elections on a normal schedule?

Canadian elections have to happen every 4 years, but can happen more often than that if there is a vote of no confidence or the prime minister decides to call an election early.

For the curious, this election we have the main left and the main right. People have hardcore concerns about both, looks like lots of swing voters.
The left is also losing a ton of voters to two minor left parties, one a Green Party, the other a union friendly party. The right is being bled by a Neanderthal trump socon party.

Oh yeah. Then there’s the party just in Quebec but has enough solid seats to always be a political force.

Trying to tweak 50 percent of the elected representatives in this environment seems difficult.

Still, I’ve always maintained that while individual voters are jackasses, the collective gets it right pretty much all the time. We’ll get the government that’s best for the country for the next four years, even if I don’t like it.

Canadian elections have to happen every 4 years, but can happen more often than that if there is a vote of no confidence or the prime minister decides to call an election early.

It should be noted that many (most?) countries that have a British-style parliamentary government do this, although the time between mandatory elections can vary somewhat.

Probably the most disconcerting thing to an American watching Canadian election coverage is that the parties’ colors in Canada (and the rest of the world) are reversed from what we use in the US.

parties’ colors in Canada (and the rest of the world) are reversed from what we use in the US.

Sort of? If I had to relate Canadian political parties to their US counterparts, I would do:

I’ve known that for a while, but what I don’t get is … what next?

So an election had to happen by 2022 and Trudeau called one early because he thinks he can win NOW, so he wants to capitalize on that. With you so far.

So what happens next? Is the deadline for the next election in 2026… 4 years from when this one had to happen? Or does calling this election early mean the next one has to happen no later than 2025… 4 years from now?

Either outcome seems undesirable. (I guess that’s my

If the answer is 2026 then that means there are 5 years between elections instead of the usual 4.

If the answer is 2025 then that means that over time you end up having a lot more elections than you really need.

How early after the prior election can new elections be called?

If it works as it does in the UK, the answer would be 2025 (except we have a maximum of 5 years between elections rather than 4) and technically a new election could be called at any time before then. In 1974 the UK had two elections in the same calendar year.

In 1974 the UK had two elections in the same calendar year.

Thanks for the explanation, even if it it works differently in Canada. I was wondering the same thing for UK, so good to know. That’s crazy that you can do it so often!

The clock is reset at each election. Trudeau has a new 4 year mandate starting now.

And time frames can be short. There was a prime minister who’s term lasted days iirc.

And time frames can be short. There was a prime minister who’s term lasted days iirc.

That seems like a lot of needless expense if the reason for the PM lasting mere days was due to holding a new general election.

So I assume that’s measured down to the day? New elections must be held on or before 9/20/2025? Are there “day of the week” restrictions? Yesterday was a Monday… are elections always on Mondays? Any restrictions about having them on holidays? Can an anti-Muslim guy hold elections during Ramadan or an anti-Semitic hold them on one of the Jewish high holy days?

Just curious. We avoid a lot of these issues by having elections on the first Tuesday after the first Monday in November. I guess Election Day could still occur during Ramadan (I think Ramadan can happen any time of year?), but certainly no one could accuse the US of deliberately timing the election to be hostile to Muslims or anything like that. We’ve been doing it that way for well over 2 centuries now. (That said, I assume that the “after the first Monday” bit is to ensure that Election Day never falls on November 1st, All Saints Day.)

ETA: No clue how easy early voting is in Canada. I guess you sidestep a lot of those issues by allowing people a lot of options on when to vote, but still… a lot of folks do put it off until the last minute either on purpose to see if new developments emerge or due to procrastination.