Lose the 2-way to procrastinator by 25. Knew my results were terrible, mostly somewhat close calls rather than clear errors, so I could hope for pushes. No such luck. Reissued.

NN romps in the group challenge, +19.68, a win by more than 10. Misclicked and passed partner’s opening bid with 9 HCP, but I wouldn’t have been within 10 of NN anyway. Lose to NN in the 2-way by 23. Would have lost anyway, but two stupid misclicks. One gave up a vul game that we were going to beat. The other was just an extra undertrick in a slam that was never making. Stupid to bid the slam, but the bids I made were the ones I intended.

I have to blame CHO for 5 imps in the match against NN, possibly more. 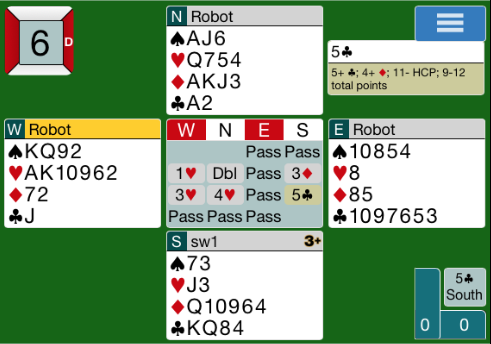 OK, the 3D response was aggressive. NN bid 2D which could not be faulted, and ended up in 5D. I prudently looked at the meaning of 5C before I bid it, and was shocked that the length shown would be 4+ diamonds, 5+ clubs. How can that be? Would I ever jump in a 4 card minor, suppressing 5 cards in the other minor? I decided that if CHO thought that (unlikely), it was still a reasonable choice to bid 5C, knowing I might be left there if he were 3-3. But he left my in 5 clubs when he had 4 diamonds and 5 clubs. WTF???

So 5 imps if CHO’s only mistake was leaving me in clubs. OTOH, over 3D I think his best call is 3NT, which makes, and I win imps. But his bypassing 3NT is not unconscionable, and perhaps CHO should also have suggested NT after NN’s 2D, pushing the board in 3NT

Strong showings by procrastinator. Wins the group challenge with +21.50. Beats me by 22 in the 2-way. Both reissued.

I see that I goofed and the other group challenge in progress, which was supposed to be declare only, is just a regular challenge.

ETA: I just completed that regular challenge, and since everyone else had also, the results came up. Congratulations to NN, with a score of +49.50. I don’t think I’ve ever seen a score so high. He won by over 40.

Obviously NN bid and played very well, but this board gave him +12, because he managed to set 4H when it was made against the rest of us, or rather against the CHO the rest of us had. NN’s bidding kept his CHO from going astray, even though it should have been easier for CHO with us. 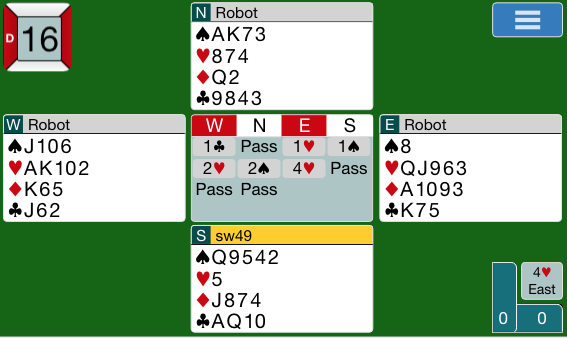 I reissued that challenge, as Declare Only really.

Sigh, just played the declare only and played a board thinking I was in 4S, when the actual contract was in no trump. But the time I figured it out, it was too late.

I did that in an earlier challenge. Don’t remember if it was a declare-only challenge.

I win the group challenge with +22.50, a margin of just over 10. The following hand was an interesting play problem, with only an imp at stake, though it’s far more notable as bidding insanity by CHO. 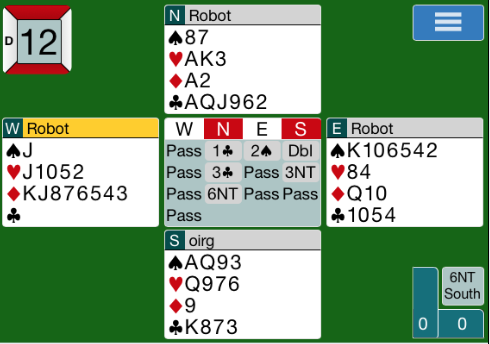 That’s the bidding at my table and Oirg’s. After the opening lead, as long as RHO has at least 5 spades, you are cold for 12 tricks on some kind of squeeze. Win trick 1 with the Q, cash 3 hearts and 5 clubs, then lead the last club from dummy when dummy has
S-x D-A2 C-x and you have
S-A9 H-x D-x.

If hearts were 3-3, the x is already good. If (very unlikely) RHO had 4 hearts, then cash the diamond ace and he cannot keep both 2 spades and a heart.

At least it could have happened, and I wish the play had actually gone that way. I still took 13 tricks when RHO decided at trick 10 to keep only 1 spade and 2 diamonds. So I pitched my losing heart and took the rest.

But the bidding??? CHO makes a nonforcing 3C bid and then jumps to 6NT? With NN he made a nonforcing 3C bid, and when NN jumped to 5, CHO basically bid 7C. When AA responded to his nonforcing 3C bid with 4C, CHO basically bid 6C. Poor procrastinator. He didn’t double, just jumped to 3NT over the 2S overcall. Surely that’s as strong as the double, then 3NT chosen by oirg and me, but CHO only invited with 4NT, which naturally he declined. Then to add insult to injury (though it probably didn’t even cost an imp), his LHO bizarrely led a diamond, depriving him of the chance for that squeeze.

Nice line. You could have told us you made 13 tricks on the non-simultaneous double squeeze, we would not have checked

I had a frustrating two hands. The one before that, I had put down my phone to do something, when I picked it back up to resume playing, I accidentally opened 7C. The bots oddly did not double. It did not fetch.

NN wins the Declare-only with +20.50, a margin over 10. Board 4 features some of the most idiotic bidding ever by both our hand and CHO. I’m not sure whose was worse, though in a Declare-only contest we all were stuck playing 2H in a 3-3 fit. I shouldn’t complain: I won 3 imps by holding it to down 4 when everyone else was down 5.

Win +34 vs NN. Lose -38 to procrastinator (-17 of those when I misclicked and passed Blackwood, down instead of making a slam). Lose -5 to AA (very fortunate to lose only overtrick imps on board 1, when I thought I was playing spades and the contract was actually no-trump. Definitely should have been down the way I played.

procrastinator squeaks out a victory in the Declare-only, +13.50, less than 4 imps above third place.

Lost by 4 to procrastinator when CHO made a hopeless lead against a doubled-into-game partscore that let it make. I should have saved it anyway, but his lead was idiotic. My hand didn’t match the system notes (themselves idiotic) but if anything his lead was worse based on what I said I had.

To my thinking, I showed 10 more cards that I needed to. On that auction, the only question should be “which trump do you lead?” He decided he should lead the heart ace, and didn’t even shift to a trump. Then misdefended thereafter, though the subsequent defense could have been OK if I had 10 HCP. Why doubling 2NT when he overcalled 1NT should shown 10 HCP :crazy:

Our head to head challenge was a wild one. Scoring in 7 out of 8 matches and a final of 27 to 37. The hand I knew at the time could sink me was hand 2. We have a monster hand:

We open 2c. 2C 2D / 2H 3H. Now that partner has confirmed a heart fit and at least 5 points, we know we have a monster. I tried to find out if my partner had the A of spades by cue bidding. I should have jumped straight to blackwood. I don’t know if the result would have been any different. You jumped straight to 6H, which I’m a bit curious about. Why not explore if you have a grand slam? After dancing with my partner for awhile, I made the executive decision to go for 7H. In many scenarios I make my 7H (and in many others I don’t). In this case, I just needed clubs not to be split 5-2 or worse. But they were, so I went down 1.