We don’t know yet how we did in the full year 2021 contest, but we’re almost sure to be somewhere on the yearly honor roll since I remembered to enter every month and they add all 12, no drops or averaging for anyone who didn’t enter all 12. 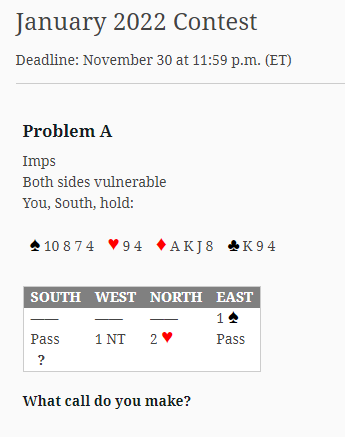 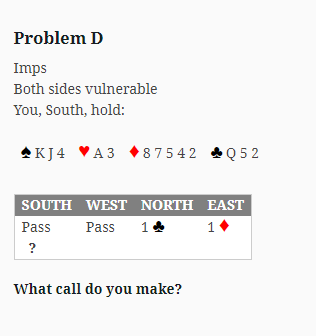 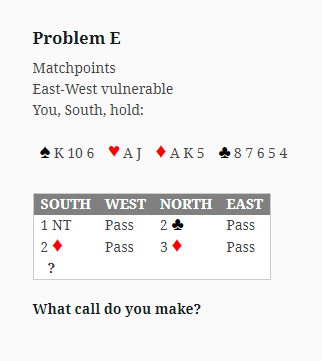 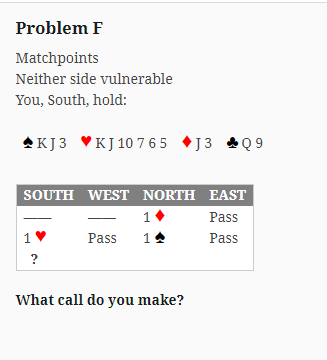 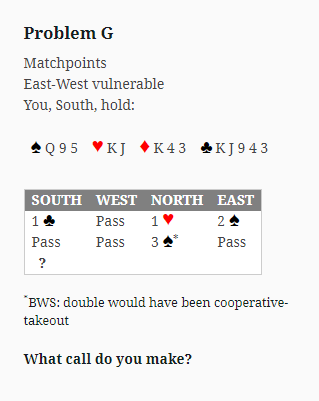 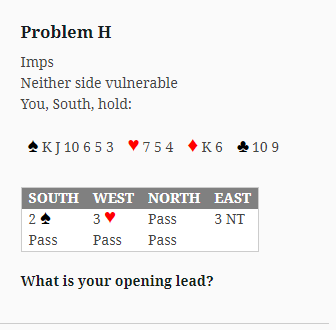 January thoughts:
A 2NT. 1087x is almost a stopper, and will be opposite as little as a singleton jack. And the suit might be blocked. Might pass at other forms of scoring. But red at IMPs we have to look for the game, especially as partner won’t be overcalling 2H on air.
B Dbl. This doesn’t initially appeal, but the hand is worth 3N, and if you just bid 3S you will often languish in a partscore when you have game, or get past 3N when that’s the only makeable game. After double, you can raise spades or rebid 3N over 3 or a red suit. FWIW I would bid 4S over a jump to 4D but would pass a jump to 4H.
C 4S I worry bidding 5S might force them into bidding slam or might just be down an extra doubled undertrick
D 2C When in doubt, raise. Even Lawrence had an example like this in one of his books. If you’ve ever played weak NT, this sort of bid is second nature. (Then you’d even bid 3C over a jump 2D. overcall.)
E 3S. I cant’ give up on 3N, but I can’t bring myself to bid it, either. So give partner a chance. NT bidders don’t subsequently introduce their own suits unbidden, so this just shows values with D support.
F 2H or 3H. How many times have we seen this coin flip? I’ll downgrade the C Qx and go with 2H this time.
G 3NT. Mainly so partner knows my hand is not slammish
H S6. Partner might have Qx and declarer A9xx. This is IMPs. I have to maximize the chances of running the suit, not worry about giving away a meaningless overtrick.

Still undecided but here are some thoughts:

A) don’t like a Pass so how do we make a game try? 2NT with nebulous stopper, 3D on 4-card suit (probably should show heart support and game try but unclear), 3H on 9x (should be enuf oppos a RvsW overcall) or 2S which will be popular, but my partner’s would surely expect 3 card support.
B) 3S with 3NT 2nd choice. Surely not double or pass.
C) 4S- although 1NT might be a slicker ruse
D) 1NT- 87xxx will have to be enough today.
E) very tough-3S or 3H or 4D could all be right. No clue to expert thinking.
F) not keen on the obvious 3H.
Tend to prefer 2H or 2S.
G) 3NT seems obvious but perhaps 4H is better. I’ll astick with 3NT
H) spade 6- since partner has shortness if you are going to lead a spade, low is better than J or 10, imo.

the “?” means person undecided, leaning toward this (or maybe undecided and this the first bid they listed)

4 voters so far, with tentative leaders on 6 of 8.

A) 3 Hearts. I think 4 hearts is our most likely game, if partner bids 3S I can bid 3NT, but don’t want to do more with just a half stopper
B) 3NT. Toss up to me, could be persuaded 3S is better. Would not double.
C) 4 Spades. Shape is bland, but sixth spades, and we are white on red.
D) Pass. Yuck.
E) 4 diamonds. When I have AK, seems likely partner is 4-6 in a major and diamonds. Odds are her shortness is in clubs. If so, slam seems likely. Matchpoints is a tough game, could have just bid past our highest scoring spot.
F) 3 hearts. Isn’t this a textbook example of this bid? If the questions if opening bids have gotten so light I should only bid 2?
G) 4 hearts. In 3NT, even if my stopper works, with no aces, seems like we would need to knock out an card, no bueno.
H) Spade 6. Tough, to me it is close between this and spade jack. Feels like we need partner to have two spades to have much of a chance.

the “?” means person undecided, leaning toward this (or maybe undecided and this the first bid they listed)

All of the ? For ST will be removed when I post the results, per his confirmation of those by e-mail. He predicts 3H or 2S will win on A, but sticks with his choice of 2N. I submitted 2H on F, even tho I personally like 3H more. It is matchpoints, where conservatism is often rewarded.

Will be interested to see how the experts bid on F. If we change the jack of diamonds to the king, I assume most would game force. If so, how narrow is the invite bid if we bid just 2 with this and GF with the upgraded hand? Or maybe I am just wrong and they would only invite with the king instead of the jack?

A king in partner’s first bid suit is almost as good as an ace. A jack is nice but matters less. So there’s really more than 2 points of difference between the example hands you give. If you changed the minor suits from Jx Qx to Kx xx everyone would at least bid 3H and some would force game. And that’s not even changing the HCP count or shape at all. The actual hand is a very close decision between 2H and 3H

Not as strong a start as I would have hoped for, but the Consensus scored 670 (as did VVV), which was the minimum score to make the honor roll, tied for 48-64. 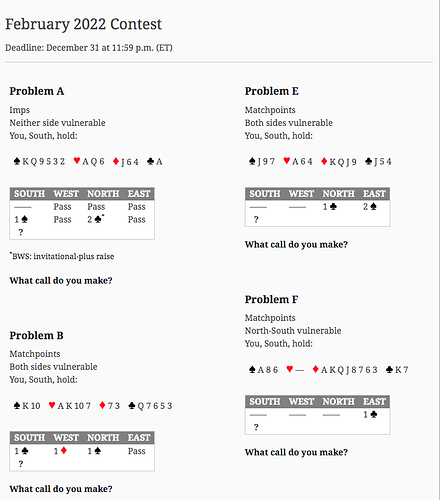 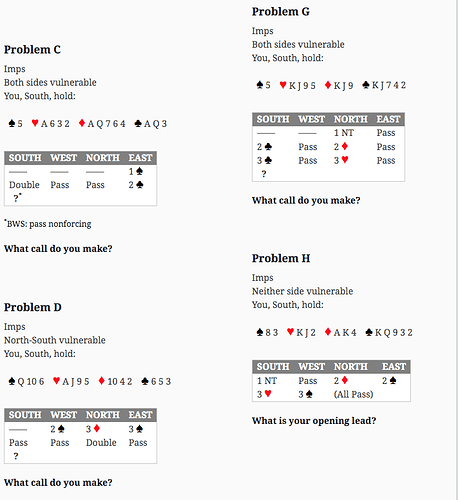 Problem A really irks me. BWS doesn’t really describe the follow-ups to Drury anywhere. In my partnerships, any bid 2N or higher would be game-forcing, so I could safely bid 3S as a slam try. Here I have no idea what’s forcing. I don’t even know whether 2H is forcing. I guess it should be since there are no special agreements. So I guess 2H, followed by a club bid. But it really irks me that 2H could also be a 4-4 12 count.

February:
A 2H. If I were sure 3S were forcing, I’d bid that. Since I need to bid a new suit, I’ll start with hearts, bid clubs next, and draw attention to the lack of diamond control.
B 2C. Any other bid is seriously demented.
C Double. 4 QTs–and transferrable values if partner decides not to pass. And if I’m wrong 2CX isn’t game. But this could be +1400 against our game or +800 against our partscore.
D Pass, 3N, and 4D are all reasonable. If I could give partner a choice of contracts, I’d do that, but since I have to guess, pass suddenly becomes reasonable. If 3N only needed Q10x to be a stopper, I’d bid 3N, but it’s likely that’s still not 9 running tricks, else partner would have bid 3S at his first turn.
E Double. I hate doubling with only three hearts, but I don’t see a good alternative. Still, I’m not at all happy about it with the long hand taking the tap.
F 1D. Too good to bid 3N or 5D, and there is no planet on which this gets passed out when I hold this many diamonds. Not doubling with a heart void.
G BWS isn’t clear as to whether 4C now would be forcing. Assuming it is, I just jump to 5C. It’s IMPs. I don’t need to be in 4H with the long hand taking the tap, and I don’t need to be in a razor-thin slam. Second choice, 4D.
H CK. Partner is likely broke, so leading KJx in his suit may not be safe. A club lead sets up a trick for our side at the least risk of setting up something additional for them.

A. 2H. As VVV said, fearing that 3S is nonforcing
B. 1N, since 2C is also seriously demented. If 2=4=3=4 with xxx of diamonds, 1NT is all anyone would choose, isn’t it? Are these diamonds that much worse, or these clubs that much better?
C. P. Cluck, cluck, but only 3 clubs
D. 4D. Surely likely to make, and 3S might also. Tho pass is a possibility. Probably 9 total spades. Often only 8 total diamonds, so LOTT suggests 17 total tricks, with the spade Q a negative adjustment. Going with 4D since there will often be 9 total diamonds
E. 2NT. Right on values, right on shape, and I have a partial stopper
F. 3NT. Can’t double with a heart void. Don’t give them any more info about best lead
G. 4C. Presume it’s forcing
H. S3. Cut down ruffs

Really tough set - low confidence on almost all of them.

A. 4 clubs. Tough without knowing what anything means here. Seems like we need diamond shortness to have a real chance at slam, so perhaps 4 spades is the right bid. Might bid it in real life, but can’t imagine it would score well here.
B. 1NT. Seems completely standard to me, so surely missing something.
C. Pass. Really tough, perhaps double is best, is it pure penalty or just show extras in context?
D. 4 diamonds. My first instinct was 5 diamonds, but when I started constructing hands, realized it was too aggressive.
E. Double. Yuck. Considered 3D, and pass. Problem with pass is even if I am lucky and partner doubles, I still don’t know what to do.
F. 5 diamonds. No idea.
G.4 clubs. Is 3 spades just marking time to see if partner can bid 3NT? I don’t think so, but could see some solvers arguing it is.
H.spade three. With so much in every suit, not afraid of declarer setting pitches - afraid of him making on too many ruffs

I have played 2 heart response to drury as natural not forcing before, so lack of clarity here is really showing!