Both are monthly bidding challenges. Both based on a similar bidding style. Yesterday’s thread is a far older and more prestigious competition, and has 12 problems per month and hundreds of entrants. This contest is for the ACBL’s District 4 (parts of Pennsylvania, New York, New Jersey, Delaware; possibly some Maryland too), and rarely has 50 entrants. Only one hand per month, but sometimes there’s more than one question (e.g., “do you agree with a specific call already made?” and “what now?”). From an AO or GoActuary perspective, for yesterday’s contest I’m submitting a consensus entry, provided we have enough participation to reach a consensus. In this one, I’m definitely submitting my own choice. It’s often influenced by what others think is best. This year so far, my results have been improved when others persuaded me to change my initial thought.

You can enter for yourself, too, at http://d4msc.straguzzi.org/ Comments are welcome, and there are few enough entrants you may find yourself quoted. Another big difference between the two contests: this one is far more generous in scoring of the non-winning choices. Top score is 100, and unless the moderator thinks your answer was intended as a joke, it will almost surely get at least 60. If you want to see the results for the last month’s problem and an indication of the comments they choose to publish: https://files.constantcontact.com/2bd6acd1101/5e372348-cbe9-4ac0-9e4a-c2ce96b7c388.pdf 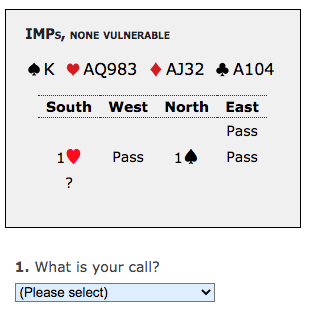 Usually I post my initial thoughts with the question. I did on the AO, but not here. My thoughts:

I hate this problem, because I can’t help seeing it as a “What will the panel do?” instead of “what should you do?” question. Viewed that way, I’m almost sure the panel will go with 2NT, even though it would be my third choice (too likely to end up with spades as trumps). I’m not even sure how the non-2NT panelists will vote. Surely some for 2D (my choice at the table for sure), maybe some for 3D, probably some for 2C.

Numbers Nerd responded on the AO. His thoughts.

I think 2D seems clear. Some will jump to 3D (I have 18 points!), and others perhaps 2NT. But this hand needs more patience.

Numbers Nerd has frequently persuaded me to change my initial choice, and that has usually helped my scores. This time, if I end up choosing 2D, I won’t even consider it a change, since I knew I would bid 2D at the table. OTOH, I still think the panel will go with 2NT, so that might be the best chance for 100 points.

Answers to the November question aren’t available until early November, but here is the December question , if anyone wants to suggest an action. Deadline is Nov 20. 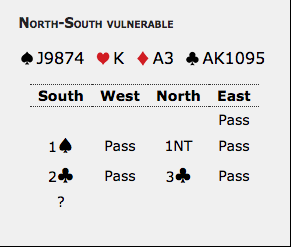 I think imps is easier. Vul at imps, it’s worth taking a shot at game, at that shot should be 5C. Too unlikely we could intelligently choose 3NT anyway.
In a different sense, matchpoints might be easier. I don’t think we want to bid a game, or propose spades, so pass. The main drawback to that is that opponents may bid 3H or even 4H (over the 4C we would bid over 3H). Is it worth bidding now to increase the chances of not hearing them bid?

The November answers: As I feared, 2NT got the most votes 6-5 among the panelists (the “expert” panel, whose votes count the most) put 22-11 among the solvers (anyone who enters). Also 9 solvers for 3D and 1 for 3NT (0 panelist votes for either). Oh well, I had no chance of winning for the year even had I got this one right.

The December problem is in the post before this one.

My December answer (almost glad I’m out of contention, so I don’t have to worry more about it). I could still change this by the 20th, if you convince me it’s a mistake.

1A Pass Game figures to be under 50%, and 3C is a sure plus. 4C might go down. The main reason to bid is to avoid opponents finding a red suit fit that they can successfully compete in to the 4-level. Is it worth bidding again now to prevent that, since if partner bids 5C it may have some play? Close call|

1B Three diamonds. Game is still unlikely, but vul at imps we’ve got to take a shot at it. Chances of going down in 4C are low, and if partner bids game (3NT or 5C) its odds likely exceed the imp threshold. Biggest concern is that 5C may be the better game even if partner bids 3NT now. That’s so likely that if he bids 3NT I’ll retreat to 4C, hopefully (on this hand) nonforcing so that he’ll devalue heart honors except the ace. He would then think Qx of spades is great, but can’t have everything.

At imps there were again 8 panelist votes for 3D, but now only 1 for pass (a voter who, surprisingly, had not passed at matchpoints). Solvers again had 10 votes for 3D, which was now the top solver choice since only 9 voted for pass.